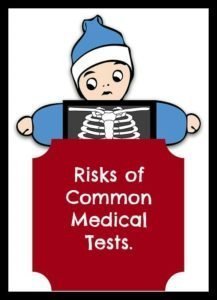 Many people have had CT scans. My own two children have had them as well, during emergency situations. So I wasn’t able to question whether or not they were really necessary.

Right now, I try not to think about how my children were exposed to many times more radiation than what they’d receive if they had a normal x-ray. Estimates vary, but it’s anywhere from 70 times to several hundreds times as much.

My one consolation is that they’ve only had one scan. I hope they never need another. Children who have multiple CT scans are at increased risk for leukemia and brain tumors, according to a 2012 study published in The Lancet, a British medical journal.

More and more of these scans are being ordered. That’s because they afford doctors a window into the body. They carry the advantage of sometimes being able to prevent the need for exploratory surgery, because the images they convey are so precise.

Do Doctors Run Too Many Tests?

It is widely acknowledged that these tests are overused. There is also widespread criticism that many of the ordered CT scans may not be medically necessary. There are growing concerns these tests may cause cancer on a mass scale, according to an article that ran in The New York Times.

Unfortunately, it also appears as if patients and their families do not always know about the risks that come with these and other procedures, which mainstream medicine uses as diagnosis tools.

As someone who gave birth to two children, who later developed health problems, I’ve learned to be very proactive when it comes to doctors. This means asking the right questions. It also means we know the risks and benefits of everything that’s offered. (However, nowadays, our family uses very little conventional medicine. We use natural remedies for nearly all of our health problems.)

When Doctors Don’t Listen is a good resource if you want to take charge of your healthcare. It’s designed to save you from being misdiagnosed and from undergoing unnecessary testing. This book is written by two medical doctors.

Do Doctors Do Unnecessary Tests?

Knowledgeable patients, however, can advocate for alternatives to these scans. For starters, they can make sure the test really is necessary. Perhaps a wait and see approach might be more prudent.

Or, perhaps, a simple ultrasound that doesn’t involve ionizing radiation may yield the same answers. Another procedure known as magnetic resonance imaging, also known as MRI, also yields very clear pictures. However, this is a more expensive test and insurance companies may balk at having to pay for it.

Patients who do decide to have a CT scan may be able to reduce their radiation exposure by insisting the scan only be done on the area of the body that needs to be studied.

It’s also possible they may be able to limit the amount of radiation they receive by discussing this beforehand with their physician, and with the technician who operates the scanner. It’s well known that a slim person, or a child, doesn’t need the same setting as a large or overweight adult. You can request that the settings on the scanner be adjusted to the lowest level needed for a clear image.

Here is another book designed to teach you how to be an informed healthcare consumer.

The recommendations for routine mammography keep changing. Currently, public health agencies cannot agree upon how often this test should be done, or at what age screening should start.

Alternative health practitioners, it should be noted, generally steer women away from this test. Thermography, which doesn’t involve exposure to ionizing radiation, is usually recommended instead.

How Often to Have Mammograms

Currently, the American Cancer Society advises all women 45 and older to have an annual mammogram. The ACS says women aged 40 and up should “have the choice” to have this screening. However, the US Preventative Task Force tells women to wait until they are 50 to begin having mammograms, which, it says, should be repeated every two years.

No one argues that mammograms are far from perfect. For one, they involve radiation exposure to sensitive breast tissue. There is also the issue of finding an abnormality that never would have progressed to a life-threatening malignancy. Currently, doctors cannot determine which abnormalities will turn aggressive. So, once something is found, treatment commences.

More than 39 million mammograms are ordered each year across the United States, according to figures from the FDA.

Here is another good resource to help you become an informed patient. After dealing with doctors, when my children were little, and, later, when I developed “incurable” nerve inflammation, I am aware that being educated about your condition is something you can’t afford to neglect.

You Bet Your Life Book

The number of false positives from these tests is very high, around 60 percent. So a healthy woman is very likely to receive a frightening phone call, in which additional testing is recommended. Once this happens, a chain of events is set in motion. One study found that if a woman undergoes annual screening, for 10 years, she has a better than average chance of receiving one false positive reading.

An abnormal finding will likely be followed up by a repeat mammogram, as well as an ultrasound. Based upon these findings, a biopsy may be ordered. If the biopsy is positive, this will be followed by surgery, radiation and potentially chemotherapy as well, depending upon the lab results.

Since mammography has become increasingly used as a screening tool, it’s estimated that one million women have been treated, unnecessarily, for breast cancer in the last 30 years, according to a 2012 study published in the New England Journal of Medicine. It’s believed that one-third of all the “cancers” found by routine mammograms would never pose a threat to a woman’s life or well being if they were left alone.

Not surprisingly, mammography is a hotly debated topic among medical experts. This imaging tests is also less accurate in women who have “dense breast” tissue. Women with more connective fibers in their breasts are at higher risk of receiving a false positive report. Also, if they do have a tumor, it’s less likely to be seen on a mammogram.

How Dangerous Are Endoscopies?

Doctors routinely order endoscopies, which are surgical procedures that involve examining the digestive tract with a medical instrument.

Despite the fact these procedures have become so commonplace, they aren’t without risks. As many as 1 in 2,000 patients may die as a result of having an upper GI endoscopy, according to an article that ran in the medical journal Bandolier. This article also noted this figure may be as low as 1 in 12,000 patients.

It’s been widely reported that an upper GI procedure was what led to the death of comedienne Joan Rivers.

A few years ago, The Archives of Internal Medicine published a study suggesting that endoscopic procedures were much riskier than what physicians, and their patients, believed. Approximately 1 percent of of all patients who undergo such a test will end up either in the emergency room, suffering the effects of a complication, or they will require a hospital stay, as a direct result of having one of these tests.

The study also noted that physicians didn’t tend to report these incidents, and that a standardized method of tracking and recording each event didn’t exist.

Major risks from these procedures include bad reactions to anesthesia, perforation of the esophagus or the intestine and infection.

This is by far one of my favorite medical books. From cover to cover, it’s filled with good advice on staying healthy, which is, by far, the best way to avoid unnecessary medical procedures.

This information is presented for discussion purposes only. It is not intended as medical advice or diagnosis. The author is not a licensed health professional, and takes no responsibility for treatment decisions our outcome. If you have health concerns, please discuss them with a doctor. Do no neglect getting medical treatment because of anything you’ve read here.