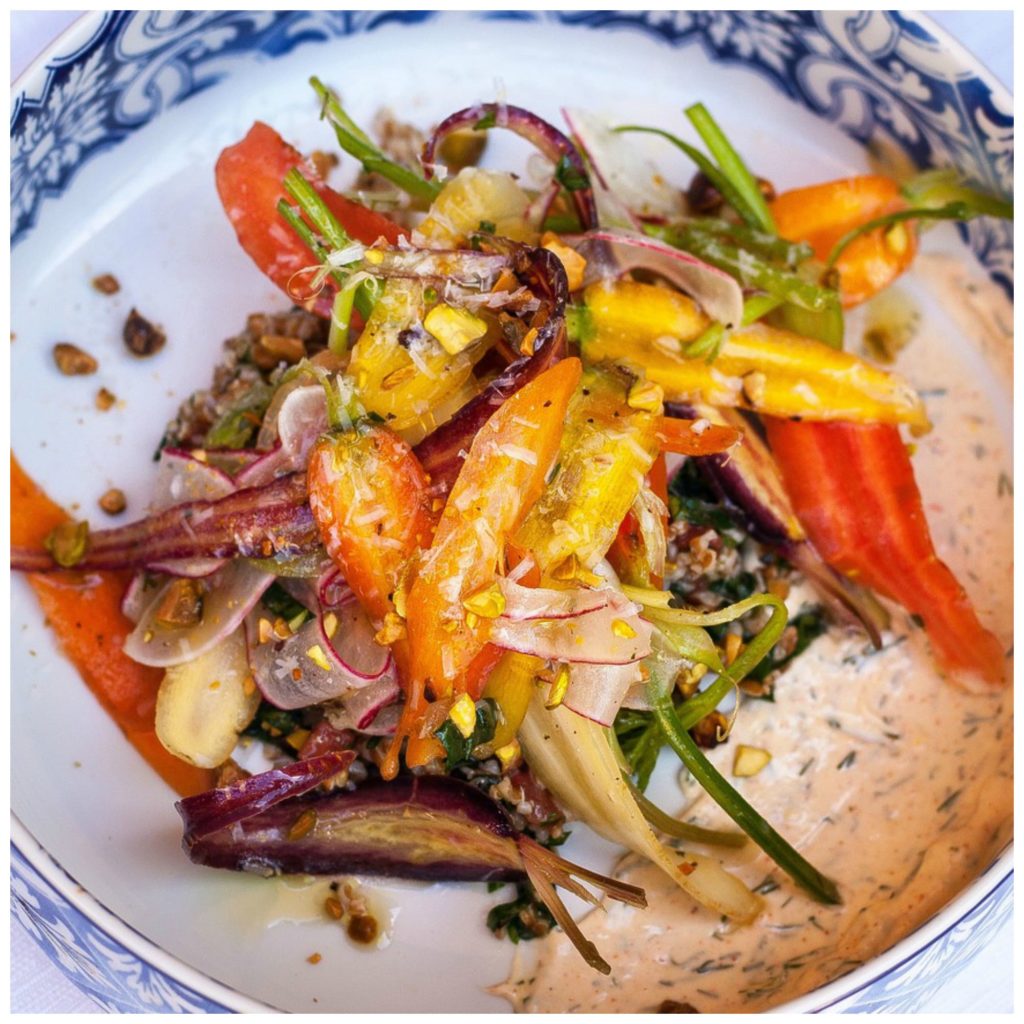 Going to a restaurant is a treat. You don’t have to shop, cook and prepare a meal. You open a menu and choose from an assortment of delicious recipes.

Your food is served and your plate is cleared. Added bonus: You don’t have to do the dishes.

However, in the United States, your restaurant food is practically guaranteed to contain genetically modified ingredients.

There’s growing awareness that GMOs are a health risk. One French found that rats fed a genetically modified diet had more cancer. Americans have been eating GMOs for about 20 years. So it’s too soon to gauge their long-term effects.

At home, I do my very best to avoid genetically modified food. Most of the food I put on the table is USDA-certified organic. This is more expensive than conventional food. But I shop for many of my non-perishables at Vitacost, a discount online health food store.

Where To Find an Organic Restaurant

You’ll want to make sure everything is cooked with non-GMO oils. That’s because much of the canola crop in the United States is genetically modified. Other crops that have been altered in this way are corn, soy and cottonseed. Most restaurants use oil from one or all of the above.

Genetically modified zucchini and summer squash are also being grown and consumed in the United States. So you definitely don’t want to order these vegetables, unless they’re organic.

How to Avoid GMO In Restaurants

If you can’t find an organic restaurant, here are some tips. If the cook uses canola oil, you can request your food be prepared with 100 percent olive oil or grapeseed oil instead.

Grapeseed oil is better for frying, because it doesn’t form toxic compounds at high temperatures.

Feel free to bring your own grapeseed oil.

Napa Valley Naturals is one of the brands I use in my house for stir fry. It comes from California’s Napa Valley. I try to buy as close to the source, to reduce the likelihood of an oil being mixed with less expensive oils that may have come from genetically modified crops.

Call the beforehand if you have any doubt about ingredients. Most restaurants are more than happy to honor special dietary requests.

Some establishments advertise “free range” meats. This does not necessarily mean the animals were raised organically, without hormones, antibiotics or genetically modified feed. It only means they weren’t kept in a pen. So you’ll also want to know whether the meat is truly organic.

Because of the high cost of organic feed, it’s often prohibitive for a restaurant to serve organic meat. So you might be comfortable just knowing the meat you will eat doesn’t have added hormones or antibiotics.

We often eat at Asian restaurants. Soy sauce is a problem. Unfortunately, in the United States, the majority of soy is genetically modified.

If you know the owner of the restaurant, and you can arrange for this beforehand, the kitchen staff might be able to cook your meal with Bragg Liquid Aminos, a natural soy sauce alternative that is Non-GMO certified. It’s also gluten free. I buy my Bragg Liquid Aminos at Vitacost.

Some of the prepared sauces in Asian cuisine might also contain soy or MSG. You can ask the owner to leave these out as well. Chinese food may contain added MSG, so you can either ask the proprietor to hold off or dine elsewhere. Thai, Vietnamese and Korean restaurants often advertise “no MSG.”

Rice is a staple in Asian cuisine. Genetically modified rice has been created and approved for some uses. Fortunately, it’s not widely found in the food supply.

Avoiding GMOs in a Restaurant

If you eat at a mainstream restaurant, you’ll be hard-pressed to find many menu items that aren’t prepared with genetically modified ingredients. But you can avoid some of the most common offenders.

Don’t order corn or zucchini. You can still ask if the cook can prepare your meal with olive oil or pure grapeseed oil instead of canola oil or vegetable oil, which may contain soy, corn or cottonseed oils.

Stay away from commercial salad dressing. It’s very likely to contain GMOs and high-fructose corn syrup, which many people want to avoid regardless of the fact it’s probably made with genetically modified ingredients. So you might want to choose olive oil and vinegar to shake over your salad, provided the oil is not an olive oil blend. Or, you can bring your own delicious organic salad dressing to the restaurant.

Not Ordering GMO Food in Restaurants

Dinner rolls may be baked with corn meal and soy flour, in addition to canola oil or one of the other oils that have a high probability of GMO ingredients.

Using real butter instead of margarine is a better bet. If you order French fries, and like to smother them in ketchup, you may want to think twice, especially if the ketchup bottle doesn’t say “no high-fructose corn syrup.” (Most American corn is genetically modified.)

Farmed fish will be raised on genetically modified feed. So you may want to ask if your salmon is farmed or wild caught.

Nothing in life is perfect. This is one instance where that holds true. You may not be able to escape GMOs altogether when dining out, but you can certainly limit your exposure, and then just enjoy your meal.

If you’re really committed to avoiding GMOs, yet long for a delicious meal, here’s an option you may want to consider. Real Plans is a meal planning service that makes it easy to put elegant, yet easy-to-prepare meals on the table. We all fall into a cooking rut. When this happens, it’s very tempting to grab a take-out meal. If you find yourself doing this often, Real Plans may help you get excited about cooking again.

Each week, you receive seven days worth of delicious customized recipes, along with a shopping list. This is designed to reduce your grocery store shopping to once a week only. For more information, click on the image below.