Bach gentian essence is designed for people who’ve suffered a setback. They aren’t having an extreme reaction to this disappointment. They may want to move forward. But they need a little push.

Gentian is one of the flower remedies developed by Dr. Edward Bach, MD. A British homeopath, he developed a new system of medicine, which sought to address healing by correcting negative emotions.

Unhealthy thought patterns, he believed, could lead to physical problems. Much of his career was spent studying this mind/body connection, and looking for ways to alleviate mental suffering.

The result of his efforts is a novel approach to treating disease. Dr. Bach originally trained to become a mainstream physician. But his career was interrupted by a diagnosis of “terminal” cancer.

Realizing he had just a short time to live, he threw himself into medical research. This, apparently, diverted his attention away from his grim prognosis. Much to surprise of his colleagues, he recovered.

This experience convinced him that a balanced mental outlook is one of the keys to good health, according to various accounts of his life.

After his cancer disappeared, Dr. Bach worked as a homeopath. But his attention soon shifted to “flower remedies.” These are mild formulas, made from blossoms that grew in his native British countryside. They’re intended to gently shift the mind into a more positive state. This  is what he believed would then lead to physical healing.

Dr. Bach died in 1936. In recent years, people are once again “discovering” these remedies. I use them myself. They appear to work, at least for me. They are very gentle, but surprisingly potent.

Please remember that I’m not a doctor or a professional homeopath, so I can’t give medical advice. All I can do is share what’s happened in my life, during my own recovery from an “incurable” condition. Ten years ago, I developed an excruciatingly painful nerve disease. It progressed rapidly. Within a few months, I could barely walk.

Today, I’m nearly symptom free, thanks to a careful diet and natural remedies. Homeopathy has been of great help. I’ve used Bach flowers when my stress has been overwhelming. Since I think they’ve helped me, I love to talk about them.

I realize I can’t promise good results. But I like to pass this information along. I first learned about these remedies from a chiropractor, who seemed to have an amazing insight into how the body works.

Each of the 38 flower remedies created by Dr. Bach are designed to correspond to a specific emotional state. He believed these can combat the full range of human emotions. Sometimes, several are mixed together to create a custom treatment approach.

On its website, the British-based Bach Center notes that gentian is often confused with gorse flower essence. However, it explains, gorse is for severe discouragement, for people who’ve “decided to give up.”

Gentian, on the other hand, is designed for more mild discouragement. The person is willing to start anew, but could use some help.

One of the beauties of flower remedies is that they are easy to use and easy to choose, since there are only a small number of possible selections. 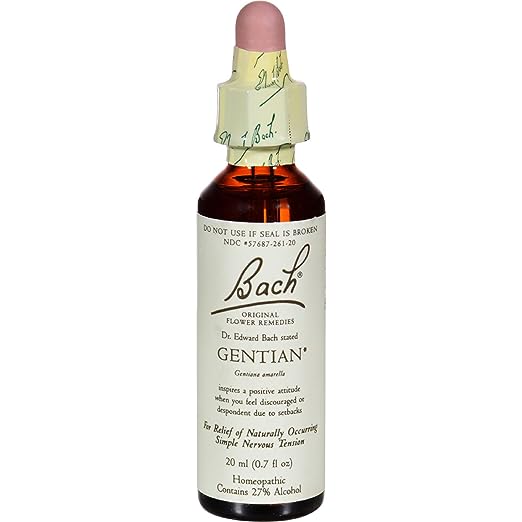 These statements have not been evaluated by the Food and Drug Administration. This product is not intended to diagnose, treat, cure, or prevent any disease. Women who are pregnant or nursing should always consult with a healthcare practitioner before taking a homeopathic remedy.