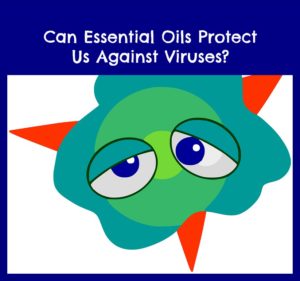 From time to time, I write about essential oil recipes designed to kill germs.

It appears as if a growing number of people are using these formulas, in an effort to stay healthy. During cold and flu season, aromatics are my first line of defense.

They’re also good for various household products, throughout the year. For instance, last summer, our basement dehumidifer had a moldy smell. But a few drops of my germ-busting essential oil formula solved the problem.

Essential oils have been around for ages. They’ve been used to treat a wide range of health problems. Some modern scientists are now investigating their potential health benefits. For instance, there’s research showing that one popular essential oil blend halts the influenza virus, at least in the lab.

This is the formula that I bought for my mother last Christmas. It’s called OnGuard and it’s sold by doTerra. Even though I don’t usually shop the multilevel marketing networks, my mother likes this brand and I want to get her something she’ll use. We all have our brand loyalty. This year I’m using a germ-fighting blend made by a different company.

Please understand that I’m not a doctor. I can’t give medical advice and I can’t promise that any aromatic recipe will keep you well. But I can share the story behind a certain popular germ-fighting essential oil blend. The story is fascinating.

During a deadly European plague, a small group of thieves remained healthy. They didn’t get sick, despite the fact they robbed the dead and dying.

It’s possible these four men lived in France. Eventually, they were apprehended. The king agreed to a lighter sentence if they revealed their secret.

According to one widely circulated account, the men belonged to a family of spice traders. So they knew that certain combinations of spices, infused in a vinegar base, offered protection against the plague. So they used this formula before approaching either an infected person or a corpse.

The Legend of Medieval Thieves

There is evidence of the existence of a Medieval germ-killing recipe. The thieves are said to have lived in Marseille, France. In the Museum of Parish, according to other online reports, there’s an exhibit showcasing this ancient formula, once nailed on a city wall.

However, you’ll hear different stories of where and when the thieves lived. By one account, they lived in the 15th century.

The museum recipe, which some now call “thieves vinegar,” contains rosemary, clove, sage, marjoram, wormwood and other herbs. These ingredients are allowed to steep in vinegar. The vinegar is then strained, and applied to the hands and temples.

Through the centuries, different versions of “thieves vinegar” have been created. One incorporates lavender and mint, both of which contain infection-fighting compounds.

In modern times, the story of the four thieves appears to have been resurrected by the Young Living company. Its high-quality aromatic oils are sold by a network of independent distributors.

Young Living Thieves oil is a combination of rosemary, clove, cinnamon, lemon and eucalyptus oil. It’s often used with a diffuser, which delivers the aromatic compounds to your lungs.

In a study conducted at Utah’s Weber State University, Thieves oil killed several strains of airborne bacteria in the lab.

Due to the immense popularity of Young Living Thieves oil, nearly every other major essential oil company now sells their own version. Right now I own both Fabulous Frannie Protect and Plant Therapy Germ-Fighting Synergy Blend.

The Protect essential oil blend is sold by Fabulous Frannie, a California-based company. In previous years, I’ve bought multiple bottlers of Protect, and I’ve been really happy with it. I’ve also been able to buy additional bottles to give away to family and friends. This formula contains the same types of oils found in Young Living Thieves.

This year I’ve ordered Plant Therapy Germ Fighter. I buy a lot of my oils from Plant Therapy, and I love all of them. This was the first company I ordered from when I realized that I didn’t necessarily need to buy my oils from multilevel marketing distributors. Excellent products also exist outside of the MLM networks. Anyway, below, you can see both Protect and Germ Fighter Synergy  Blend.

I use these blends when I feel like I’m coming down with a cold. I dilute 2-3 drops in carrier oil and apply it to the inside of my wrist. Also, I use them when I’m working. They contain aromatics that are uplifting and invigorating.

Young Living Thieves, do Terra OnGuard, Plant Therapy Germ Fighter and Fabulous Frannie Protect all contain clove, cinnamon, rosemary and eucalyptus oils. However, the doTerra formula uses orange oil, instead of the lemon that you find in the Thieves and Protect blends.

The individual ingredients found in these products have been more widely studied. For instance, rosemary has a long history of medicinal use. This evergreen plant is closely related to mint. It is native to the Mediterranean area. The ancients used it to stop muscle spasms and to increase the memory.

Modern researchers at Northumbria University in the United Kingdom have lately found that it can, indeed, help with recall. A group of subjects who took a whiff of rosemary essential oil did better on certain tasks that involved, compared to a control group.

One of the active ingredients in rosemary is rosmarinic acid. A team of researchers isolated this compound, and found that it was an effective as an anti-viral for mice infected with Japanese encephalitis. Their findings were published in the September 2007 edition of the journal of Antimicrobial Agents and Chemotherapy.

Oil from the eucalyptus globulus tree, native to Australia, has a long history of use among the Aboriginal people. Traditionally, it’s been used to fight malaria, and as an antiseptic agent for cuts and wounds, where it’s applied topically to prevent infection. (However, if you’re reading this, remember to never apply uncut essential oil directly to your skin.)

The February 2006 edition of the journal of Clinical Microbiology and Infection published a study that showed eucalyptus has strong anti-bacterial and anti-viral properties. In the lab, it effectively killed staph and strep bacteria, as well as the Haemophilus virus.

This article is presented as information and discussion only, and is not meant for diagnosis or treatment. People with health concerns should discuss them with a physician.