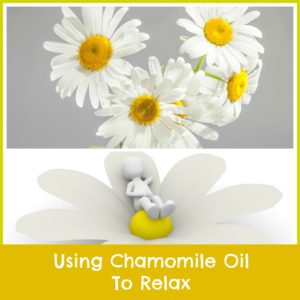 Roman chamomile oil is said to be good for your hair, your skin and your nerves.

Researchers are starting to prove that essential oils have certain health benefits. This is something that’s long been contended by aromatherapists. Essential oils have been used since antiquity for both physical and emotional health problems.

Those of us who use essential oils, day in and day out, don’t need any more convincing. We’re already familiar with the uplifting feeling we experience when we inhale our favorite scent. So we’re not anxiously awaiting the next scientific study, designed to confirm this. For instance, right now, it appears as if many people use Roman chamomile essential oil as a sleep and relaxation aid.

Much of what we know about the properties of Roman chamomile essential oil come from accounts of its use as a folk remedy. This aromatic is often recommended for calming the nerves and promoting relaxation. Another suggested use is for soothing and healing the skin. Some people believe it’s a good natural remedy for eczema.

However, as far as I’m aware, very little research has been done on Roman chamomile oil. Actually, I wish there were more studies in general on essential oils, especially those in clinical settings, or with real people. Much of the research involving aromatics seems either laboratory based, or conducted on animals.

The relatively little information we do have about other essential oils is highly encouraging. For instance, it is known these highly concentrated plant extracts contain compounds that help fight infection and inflammation. If we’re feeling down and out, a few whiffs of citrus, peppermint or another aromatic might be able to brighten the day.

The University of Maryland Medical Center is one of the few mainstream outlets in the United States that seems to take alternative medicine seriously. On its website, it states, “In general, it (aromatherapy) seems to relieve pain, improve mood, and promote a sense of relaxation

Roman chamomile oil is often found in cosmetics. This oil is often added to homemade skin creams, at least judging from the many recipes I’ve found on Pinterest and other social media outlets.

For instance, I use essential oils to make homemade skin creams. I’d much rather use natural substances on my skin, instead of beauty products that contain parabens and other questionable chemicals. Parabens are added as preservatives. But these chemicals disrupt the hormones by mimicking estrogen. There’s growing concern they could also be contributing to the breast cancer epidemic.

One of the best known uses for Roman chamomile oil is for relaxation. This oil is considered calming and soothing. It’s often used alone, or paired with other oils, such as lavender, which have similar properties.

I’ve written earlier that I use aromatic oils at night to help me sleep. I put a few drops of essential oil on a tissue and leave it by my pillow. For me, this has made such a difference in my life. I used to have a serious insomnia problem. Now, I sleep much better, and I greatly credit my essential oils.

Although I can’t claim that aromatics will help anyone else sleep, I’m so grateful they work for me. I’ve found that rotating my oils, and not using just lavender, seems to make them more effective. That’s why I like owning a collection of oils.

Roman chamomile oil is also believed to be good for the skin, since it’s considered a soothing, healing oil. It’s often added to all-natural and homemade cosmetics and hair conditioners.

The Roman chamomile oil shown above is sold by Plant Therapy. This is the first company I tried when I decided to venture outside of the MLM networks. I was so impressed with the quality. This was an eye-opening experience. I realized that excellent oils can be obtained without buying them from an MLM distributor.

After my initial Plant Therapy purchase, I began researching this company. I discovered that it has exacting quality controls and an excellent reputation. Its oils are tested twice. One test is conducted by an outside lab. Knowing this set my mind at ease. I use these oils with complete confidence they are potent and pure.

Roman chamomile oil is often found in skin creams and salves. I love using essential oils in my homemade beauty products. Several years ago, I was faced with a health crisis. I have chronic nerve inflammation. So I decided to clean up my diet and ditch all of the chemical concoctions I was using on my skin. I’ve never looked back, because, at least for me, plant-based cosmetics do a much better job.

Among the things to go were my lotions and skin creams. But, that’s okay. I’d much prefer to use homemade body butter. Here’s a really easy recipe for body butter, using soothing chamomile oil.

These statements have not been approved by the FDA. These products are not intended to diagnose, treat, cure or prevent any disease. Women who are pregnant or nursing should not use essential oils, unless directed to do so by a healthcare professional. People with ragweed allergies may want to avoid Roman chamomile oil.