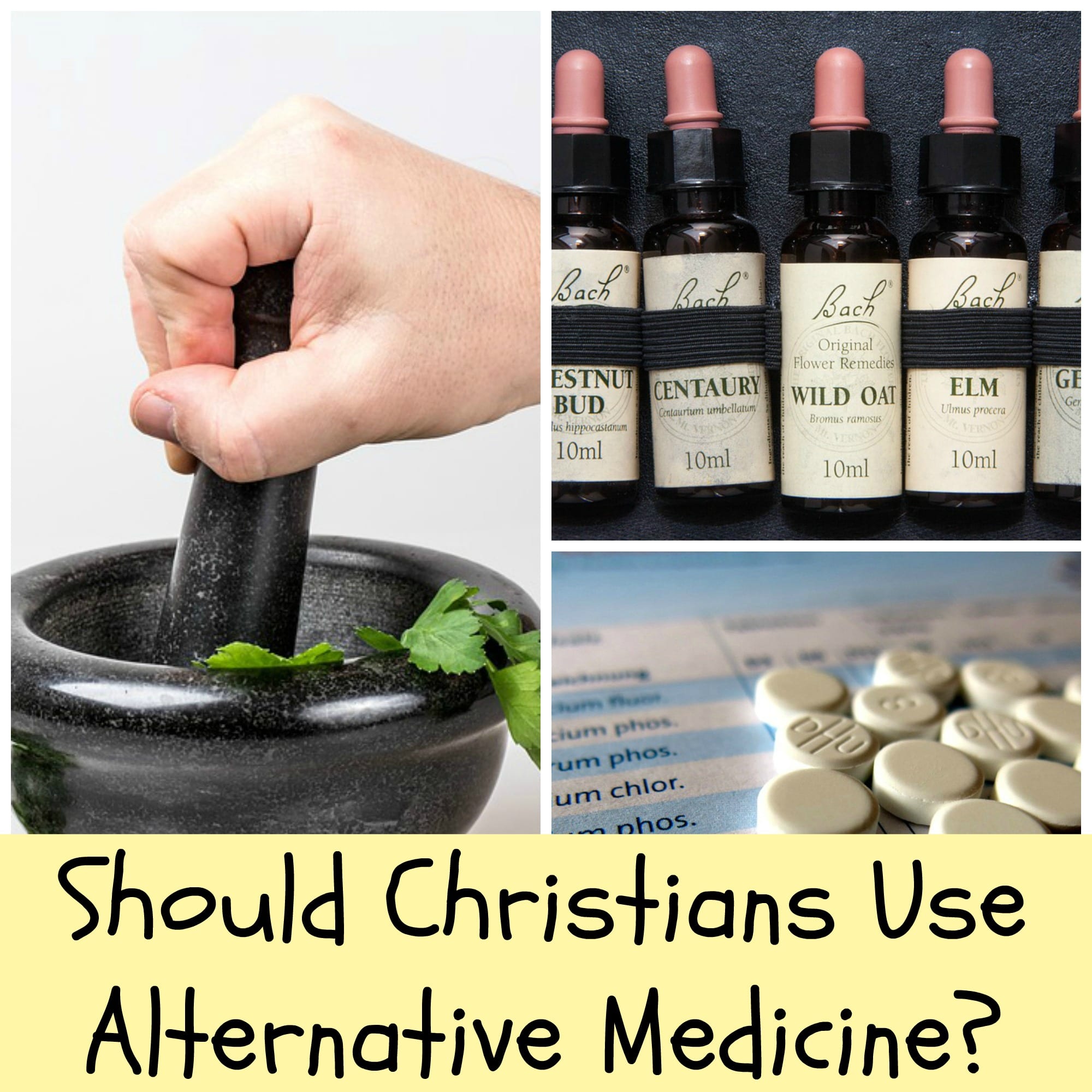 Some Christians worry that alternative medicine goes against their religious beliefs. So they avoid certain non-toxic treatments, which could potentially help them.

When I became more serious about my Catholic faith, I shared the same concern. Some holistic treatments, such as homeopathy, worked so well that I started to wonder if, perhaps, a little magic was involved. Our family physician set my mind at ease.

“No, this is a real medical system,” he assured me. At one time, there was a large network of homeopathic hospitals in the United States.

Finally, after talking with my doctor, and a couple of Catholic priests, I put my fears to rest.

My children suffered from a number of health problems. Homeopathy, as well as herbs and other supplements, undid a lot of the damage.

It’s my personal belief this was largely caused by our modern lifestyle, including the terrible diet I ate while pregnant.

Then add on various mainstream medical interventions that messed with their natural immunity.

Deeply convinced that God was driving their recovery, I began to feel more comfortable with alternative therapies.

Now, I no longer worry if I’m offending God by turning to alternative healers. After all, the remedies and supplements they use come from the plants and minerals that He created.

Please understand that I’m not a doctor, so I can’t give medical advice. Everything written here is my personal opinion only. If you do have health concerns, please do not delay seeking treatment.

If we were sick, not using alternative medicine would probably mean we’d be dependent upon commercial pharmaceuticals. These are created by man.

The doctors advocating only drug-based treatments, even if they have good intentions, are schooled with the idea that every disease needs a drug.

Although drugs have saved many lives, they’ve also taken a lot of lives. This is a fact. In the United States, prescription pain killers cause nearly 19,000 deaths in 2014, according to the Centers for Disease Control.

The pharmaceutical industry is enormous. We often hear complaints about Big Pharma.

God doesn’t like greed. Nor does He like deceit. Apparently, slick marketing campaigns are used to promote these drugs. One advertising expert even admitted that he invents new diseases in order to sell more drugs.

On other occasions, he takes an existing condition and gives it a new twist. All of this was reported in a book titled, Selling Sickness: How the World’s Biggest Pharmaceutical Companies are Turning us all into Patients.

In our house, when we’re sick, our first line of defense is homeopathy. (We also use herbal remedies and essential oils.)

Homeopathy is a form of medicine that treats a patient’s symptoms. It operates under the principle of “like cures like.” If a substance is capable of causing a condition, a tiny bit of the same substance can also lead the body into recovery.

So, if someone complains of a sore throat with a lot of excess saliva, this may mimic the signs of mercury poisoning. A common remedy for sore throat is Mercurius vivus, made from mercury. However, it’s diluted so much that no trace of the original toxin remains.

Homeopathy was established more than 200 years ago by German physician Dr. Samuel Hahnemann, MD. It then gained an immense following in both Europe and in America.

However, it came under attack from mainstream medicine. A group of conventional doctors embarked upon a successful attempt to stamp out this form of healing. The rise of pharmaceuticals contributed greatly to homeopathy’s fall from stature.

Realizing this historical fact made me a lot more comfortable for using homeopathy for my family. Here is the book I used often when my children were little. It’s very worn. It still gets a fair amount of use. That’s because the recommendations can apply to adults as well.

I have a shelf filled with excellent homeopathy books. But, if I were a beginner, Homeopathic Medicine for Children and Infants would be the first one added to my collection. (Actually, it was the first homeopathic book I bought.)

Homeopathic Medicine for Infants and Children

After reconciling with the fact that alternative medicine didn’t conflict with Christianity, I learned about Father Sebastian Kneipp. He was a 19th-century Bavarian priest. He is widely considered the founder of modern naturopathy.

Naturopathy is a medical system that works with the body. A great deal of attention is paid to nutrition. Once a patient is eating well, various other therapies are employed.

Father Kneipp invented a method known as the “water cure,” in which applications of hot and cold water are applied alternately. By this system, he cured himself of tuberculosis. Father Kneipp lived at a time when this disease was almost always a death sentence.

Father Kneipp also had an extensive knowledge of herbal remedies. (His mother was an herbalist.) After becoming a priest, he began healing his parishioners. He was so successful, in restoring spiritual and physical health, that people from all over Europe traveled to see him.

I do avoid any treatment that could jeopardize my faith. (I’ll explain more about these later.) Holistic healing is often associated with the New Age movement, which is not in accord with Christianity. But the roots of modern naturopathic medicine are traced to a Catholic priest.

Who Was Saint Hildegard of Bingen?

Saint Hildegard of Bingen was a remarkable figure. She was a cloistered nun. This means she had little contact with the outside world. Despite that, she developed a sophisticated medical system.

Her writings on natural remedies are being studied by holistic healers today, 900 years after her death.

Her medical approach harnessed the natural powers of the earth, which God has given us. She made remedies from plants, minerals, reptiles, fish and other substances.

Saint Hildegard also advocated reconciliation with God. This, she believed, was the first step in regaining health. She also preached moderation in diet, combined with gentle exercise. This included walking after the last meal of the day.

Her approach appears to be much more in accord with how God wants us to treat our bodies, as opposed to taking pharmaceuticals we may not need, which also have the potential for great harm.

Hildegard of Bingen’s Medicine is one of my favorite books. It describes in detail time-tested remedies for a wide range of conditions. This book also includes fascination information on what she believed is a precursor of cancer, and how to restore health, when it starts to fail.

Most importantly, it leaves the reader with the clear sense that natural healing can bring you closer to God, rather than pull you away.

However, I believe some types of alternative medicine do have spiritual risks. I always make sure the practitioner I work with does not use divination or other similar practices in my treatment.

That’s because this would be in violation of my Catholic faith. I am very careful to avoid working with with healers that use these methods. Instead, I’ve become involved with some otherwise wonderful practitioners who have a radically different worldview.

There are always options. If one practitioner doesn’t work, I truly believe God will send the right one.

There are various types of energy healing I stay away from. For instance, reiki is something I don’t use. In 2009, the United States Conference of Catholic Bishops published a document warning Catholics against using this therapy, because it was in a “no man’s land,” with no scientific basis, nor was it guided by Christian belief.