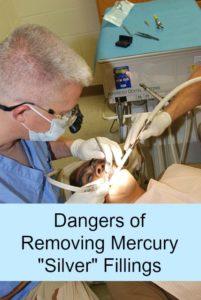 Dentists have been putting “silver” fillings in people’s mouths for centuries. Because we tend to trust these highly educated professional, we assume what they’re doing is in our best interest.

But it appears we’re being poisoned. That’s because these fillings contain mercury, in addition to the silver. There’s also compelling evidence this toxic heavy metal leaches into our mouth. This happens when we breath. Our fillings release more of poisonous mercury whenever we eat or drink. Hot liquids, in particular, create mercury vapor. We then inhale these fumes, which travel directly to our bloodstream.

Mercury is not easy to get rid of. It accumulates in our bones and in our brains, as well as in our vital organs. As the most toxic substance on the planet, excluding radioactive elements, mercury can make you very sick.

Many alternative health experts believe mercury poisoning is one reason they’re seeing so much chronic illness. For one, this toxin can trigger chronic inflammation.  This, in turn, can cause various diagnoses, such as cancer, chronic fatigue, digestive problems, asthma, muscle tremors, seizures, vision problems and much more.

About 10 years ago, I developed nagging back pain. This quickly led to widespread nerve inflammation, which got so bad I could barely walk. Also, the way it was progressing meant a wheelchair was likely part of my future, unless something changed.

Whatever was going on affected my adrenal glands. Two holistic practitioners diagnosed me with adrenal exhaustion. This is a condition brought on my physical and mental stress. Heavy metals such as mercury are thought to contribute to adrenal fatigue.

Is it Safe to Remove Silver Fillings?

The issue of safe removal of dental mercury is a complicated one. Done correctly, it can lead to better health. Improper removal can apparently create more problems. Removal leads to a short-term increase in exposure to this deadly toxin. The trick is to reduce this as much as possible. This is why you’ll want to find a holistic dentist who’s very familiar with what’s come to be known as the Huggins Protocol, or at least removal system using very similar safeguards. This protocol is named after mercury-removal pioneer Dr. Hal A. Huggins.

Some dentists claim to be experts at filling removal. They may even have a holistic mindset, which makes you think they know what they’re doing. They often have the right intentions. But they can also cause a great deal of harm, if they don’t use the proper precautions.

Before submitting to this procedure, learn all you can about the risks and benefits. This information will also help you find a practitioner who will help your body heal itself, rather than create more problems. The book below, It’s All in Your Head: The Link Between Mercury Amalgams and Illness, is written by Dr. Huggins.

It’s All In Your Head Book

The Dangers of Removing Silver Fillings

I hope my own mistake in hasty filling removal can help someone else. A little more than six years ago, my chronic nerve condition had just about resolved itself. I was under the care of an excellent homeopath and herbalist, and my symptoms had almost disappeared.

Then one of my mercury fillings broke. This set off a cascade of events that ultimately caused my pain to flare. It was a huge setback, to say the least.

Because this was a dental emergency, I went to the closest holistic dentist I could find. He removed the rest of the filling, and replaced it with a resin composite. Unfortunately, he neglected to use oxygen. Drilling releases a large amount of vapors, and having a source of oxygen can offset this hazard.

Years earlier, I had several fillings removed by another dentist. She also didn’t use oxygen. Several years later, I developed horrifying nerve pain. Previously, I had been healthy, except for the fact I tired easily. (Too much stress also played a factor, no doubt.)

Getting My Mercury Fillings Removed

I don’t know exactly why the second dentist didn’t use oxygen. But he recognized his error and apologized. So, if you decide on filling removal, make sure there’s oxygen running.

Also, I made the mistake of having the rest of my fillings taken out, within a very short period of time. In retrospect, I should have spaced out the procedures, giving my body more time to detox.

For about six months, my nerve pain worsened. Finally, my body once again began to heal. (This was aided by a good diet, herbs, homeopathy, essential oils and lypospheric Vitamin C, which I took for a couple of weeks after my procedure, to help my body get rid of the mercury, released when my fillings were taken out. (Fortunately, this was the one thing I did right. But I encourage others to seek out the best dentist possible, and one that follows the Huggins protocol. From what I can tell, this calls for intravenous Vitamin C.)

Although everything ended well, additional mercury poisoning was a setback that could have been avoided or mitigated.

These statements have not been approved by the FDA. These products are not intended to diagnose, treat, cure or prevent any disease. People with health concerns should discuss them with a doctor.

Women who are pregnant or nursing should not use dietary supplements, unless directed to do so by a healthcare professional. If you are pregnant, or think you may be, make sure your dentist is aware of your condition. 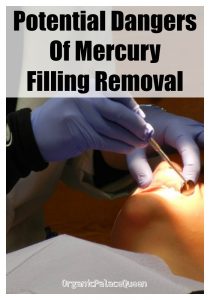 Leave a Comment
Previous Can Dairy Cause Inflammation?
Next Top 5 Genetically Modified Foods To Avoid