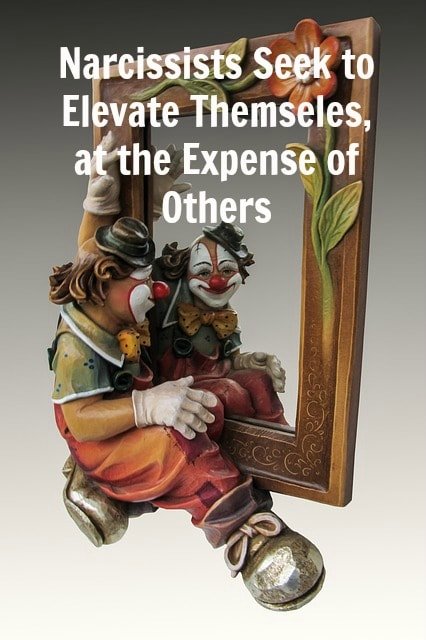 This is a natural health blog. But, from time to time, I write about malignant narcissism. This is a form of arrested development. People with this disorder abuse others. They are overgrown bullies.

They create a lot of stress. This, of course, is bad for you, both physically and mentally. So I like to give my readers information on dealing with toxic situations, created by these emotionally stunted individuals.

Otherwise, I don’t feel as if I’d be presenting a complete picture on how to lead a non-toxic lifestyle.

Malignant narcissists are malicious. They lie, cheat, steal, slander and undermine you at every turn. However, to the rest of the world, they seem like saints.

They typically choose a target. This person sees them for what they really are. But no one else does.

Once a narcissist singles you out, he or she makes your life a living hell. Whether this happens at work, or in a social setting, things turn ugly. The atmosphere becomes highly toxic, especially for you.

Oftentimes, however, it’s hard to discern just what’s going on. So I hope this article can shed some light on knowing when to cut your losses and walk away. (Your mental and physical health depend upon it.)

My discussion is limited to non-marital relations. I am not a marriage and family counselor. So I’m not qualified to give that kind of advice. I’m writing only from the perspective of someone who’s watched morally disordered people in action.

This experience has taught me a lot about how to recognize a toxic situation. I hope my insights can help someone else.

If you’re not familiar with the term “malignant narcissist,” the best description I can give is to compare it to psychopathy. Not all malicious narcissists are serial killers. But they are still dangerous, as the author of the book below points out.

How to Recognize a Toxic Situation

Toxic situations make us uncomfortable. Oftentimes, though, we can’t quite put our finger on why a particular dynamic is unhealthy.

Typically, when things turn ugly, there’s a great deal of confusion. We can’t figure out what’s really happening or the source of the trouble.

We may not know for sure if a situation is bad for us or not. Our perceptions could arise from our imagination, a wrong impression or a passing problem, which will resolve itself.

Lingering toxicity is a different story. We need to take it seriously. It’s going to have a negative impact on our lives. So we need to address the issue. This could include accepting things as they are or trying to change them. It could also involve making a rush for the exit. This last option is usually the only logical choice when things have spun out of control.

But, first, how do we know if a situation is toxic?

The first clue is how a person or place makes you feel. You can’t get comfortable. You don’t feel at home.

Pay particular attention if you once felt as ease, but no longer do. People change, situations change and. sometimes, someone’s true personality begins to reveal itself.

It may start with a growing suspicion that something isn’t right. Then, it progress to a full-blown problem, which causes you to lose sleep just thinking about it.

Don’t discount your impressions. They are valid. It’s also highly likely others have noticed and have a similar take on the situation.

Mass confusion results when someone with a deep-seated character flaw known as “malignant narcissism” is working the crowd. This creates a toxic environment.

Malignant narcissism is an antisocial personality disorder. It was first described in the 1960’s by a German psychologist named Dr. Erich Fromm. He called it “the quintessence of evil.”

No one really knows what causes it. One theory is that people with these characteristics did not receive the love they needed early in life. Consequently, they never learned to trust. Nor did not develop the full range of emotions, including respect for and empathy for others.

Their behavior is highly antisocial. They do not relate to others honestly. So you can expect lying, betrayal, treachery and deceit.

(Please note, the above theory is only a theory. It doesn’t explain why other individuals raised under similar adverse circumstances become highly empathetic.)

How To Forgive a Malicious Person

Narcissists thrive on drama. Actually, they don’t seem to be able to exist, unless they are busy tearing something apart. Many of them also have a strong sadistic streak. They like to choose victims and inflict emotional, or sometimes physical, pain.

So, if a toxic cloud descends at work or elsewhere, it’s quite possible malignant narcissism has reared its ugly head.

If you’re the target, watch out. You become a scapegoat. Others turn on you, as the narc engages in an all-out character assault.

Sometimes, especially in the workplace, everyone gangs up on the target. This behavior, apparently, has become so commonplace that it’s referred to as “mobbing.”

Why Do People Believe the Narcissist?

These drama makers are extremely clever. They’re adept at pulling others into their deviant activities. People may side with the narcissist. Or, they may even dole out some of the abuse themselves.

Playing on people’s need to fit in, narcissistic bullies often recruit one or more like-minded individuals to carry out their marching orders. The term “narcissistic abuse” refers to the fact that these morally disordered people are bullies, who like to hurt others. Since we are talking about adult bullies, it’s usually emotional damage, as opposed to physical.

So, if you’re a target of one of these thugs, it may seem as if one or two front men are causing all the trouble. In reality, the main player is backstage, pulling the strings. This may become apparent only in hindsight.

That’s why it’s sufficient just to realize a particular environment is very unhealthy, without totally understanding the specifics. Once you reach that conclusion, you can formulate a plan.

If the situation is highly toxic, leaving is probably your best bet. By the time you notice something’s wrong, it’s already late in the game. Narcissists know when to strike and when to hold back. They won’t attack unless they can win. Therefore, they’ll retreat, or wait it out, if they know someone has a strong support system.

If they know you have a lot of friends, who will defend you, they’ll generally leave you alone. Or, if they’re really determined to take you down, they’ll slowly undermine your relationships. This is done by spreading false rumors, along with other forms of “relational aggression.”

The fact that this is happening, in the first place, means that you don’t have a lot of support in this setting. In other words, it’s become toxic.

How Narcissists Lie About You

People of weak character lap up the lies. Bigger people will support you, at first. But their stance may shift to “neutral” as the hate campaign gathers steam. It becomes harder to do the right thing, because, at this point, group think takes over.

The situation is now a battlefield. But it’s not an even fight. The attacks increase in intensity until the malignant narcissist thinks she’s won. Generally, this means the target is driven from the organization.

However, retreat under these circumstances is nothing to be ashamed of. Staying put is a losing proposition. Actually, everyone loses. Once one target leaves, the narcissist chooses another.

Most people cannot prevent a narcissistic attack because they don’t see it coming. The abuser has made a lot of headway by the time you realize something is wrong.

However, if you do spot someone with strong narcissistic traits, and she’s gearing up for battle, it may be possible to defend yourself.

One of my relatives, a marriage and family therapist, told me a story of how she likely prevented an attack at work. Because she’s on the lookout for narcissistic behavior, she saw the warning signs early on. So she marched up the woman who was giving her a hard time. She bluntly asked the woman what her problem was. “If you have a problem with me, then please tell me,” she demanded to know, with a confident smile on her face.

I’m not sure everybody could pull this off. But it seemed to work for her.

I also read a Pinterest quote created by a psychologist. If you sense trouble brewing, he advised, don’t go on the offensive. Remain pleasant. Don’t react to their behavior. Instead, find something you like about this person and pay them a sincere compliment, or a series of them. This tactic might spare you a lot of problems down the road.