Digestive Bitters Benefits and Why We Need Them 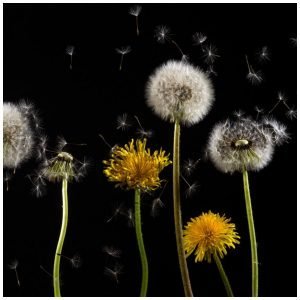 Why do people take medicinal “bitters?” It’s not because they taste good.

As the name implies, these herbs are bitter. When we eat them, the shock of them hitting the insides of our mouths increases our saliva flow. This, it’s believed, sets off a chain reaction that ultimately results in revving up our digestive system. It’s thought our body then produces more of the liquids and enzymes needed to break down our food.

This is just one of the ways bitters can potentially help improve our health. There may be others others. But one of the main reasons for consuming a harsh-tasting herb is to support the digestive process. Many alternative health experts believe that bad health arises from poor digestion, so this is why you’ll find bitter herb health tonics.

I’ll admit that dandelion root tea tastes terrible. At least it did the first time I tried. Because I wasn’t sure I could down a whole cup, I sweetened it with honey. The next day I didn’t. Strangely enough, when I tried it again the taste was appealing.

All I can guess is that my body must have needed this herb. That’s why, for awhile, I why I craved my afternoon cup of dandelion tea.

As with many herbal medicines, dandelion root tea is probably not designed to be taken long-term, without a break. So I drank it until I stopped liking the taste. I assumed this was my body’s way of telling me I don’t need it anymore.

I do need to point out that I’m not a doctor. So I can’t give medical advice. Also, I cannot claim that herbal bitters or any other natural remedy will solve your health problems. All I can do is share my own experiences with drinking dandelion tea.

I can also pass along other published information. The University of Maryland Medical Center notes that dandelion roots are typically used as a folk remedy for the liver and gallbladder, and also to increase the appetite.

I’ve written about the reason why people take herbal bitters before. But I wanted to touch upon this subject again, because it’s such a simple remedy that can easily be added to a health regimen. However, anyone with chronic health conditions, especially if they’re taking medication, should check with a doctor before using botanical medicines.

Digestive Bitters Benefits and Why We Need Them

Dandelion tea is considered a good kidney and liver tonic. The root of the lowly dandelion is packed with nutrients, which include calcium, magnesium, zinc and iron.

This herbal dandelion tea is also said to be a good blood cleaner, and will help with blood sugar regulation. It’s often recommended for arthritis, as it eases inflammation. Some people use it as a folk remedy for indigestion and reflux.

Digestive Bitters Where to Buy

If you subscribe to natural medicine, good health starts on the inside. It eventually works its way to the surface of the body. That’s why dandelion tea is also considered a good supplement for healthy skin. This is the brand of dandelion root tea you’ll find in my house. I highly recommend it because it’s so rich and strong. I also liked the taste, once I got used to it.

One school of thought believes we need to eat bitter foods. The Standard American Diet, deficient on so many levels, generally does not include adequate amounts of bitter foods. We’ve also become very accustomed to sweet, salty and highly processed foods, to the detriment of our health, as this is not what our bodies are meant to eat.

In addition to cleaning up our diets, it’s believed that consuming “bitters” can help balance out the system. Some herbalists are of the mind that unless we regularly eat bitter plants, our digestive process will not function at its best, because it is no longer “challenged” by the bitter taste. So it stops producing as many enzymes.

How to Get Digestive Bitters Herbs in Your Diet

There are numerous ways to get enough bitter herbs in your diet. One is to eat fresh dandelion leaves and other herbs with the same same bitter quality, such as chamomile, coriander, sorrel and mint.

However, for many of us, our modern hectic lifestyle precludes us from eating enough of these plants. Fortunatley there’s also a long tradition of taking supplemental bitters in the form of a tonic.

There is also a potential advantage to taking several herbs at once. That’s because it’s believed that multiple plants consumed together are likely to work in synergy. So it’s thought they’re more powerful in combination, rather than separately.

Swedish bitters is a popular tonic thought to be centuries old. It was widely promoted in the 1700’s by two Swedish physicians. However, with the advent of pharmaceuticals, it fell out of favor.

Now this herbal bitter tonic been rediscovered, and is available online. There are different formulations. The one shown below contains aloe leaves, rhubarb, senna, myrrh, carline thistle, camphor, saffron and a number of other herbs. 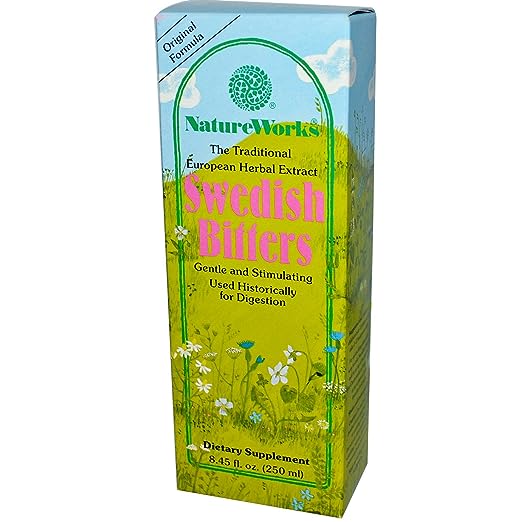 These statements have not been approved by the FDA. These products are not intended to diagnose, treat, cure or prevent any disease. Women who are pregnant or nursing should not herbs or other natural remedies unless directed to do so by a healthcare professional.