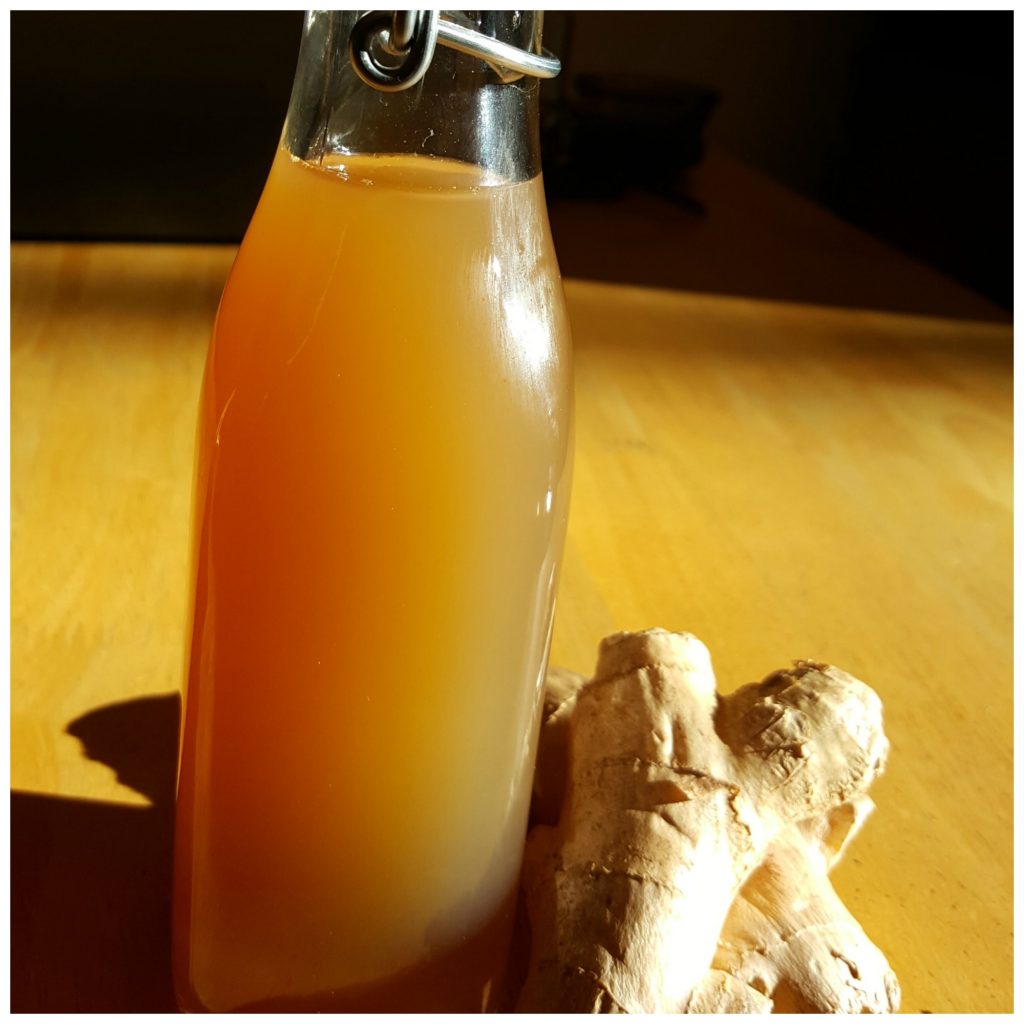 One of my favorite Christmas presents one year was an unassuming bottle of homemade ginger syrup.

Homemade ginger syrup is such a great idea. So easy to make. So tasty. And so good for you.

Ginger has some possible health benefits. These include the potential ability to reduce pain and inflammation in some people with arthritis. It may also have a role in helping to reduce nausea.

Traditionally, ginger has a long history of use in folk medicine to help digestion and to support the body when you’re fighting a cold. It certainly seems a lot safer than taking over-the-counter cold formulas, which can cause potentially serious side effects.

Ginger syrup is a great remedy to have on hand. When you’re sick, or in a hurry, it’s easier to use than chopping ginger and then steeping it in tea. A bottle of ginger syrup will last about a month refrigerated. (I’m sure we’ll use it up well before its expiration date. This syrup can also be used in cooking. However, it’s very strong. So you’ll want to use it sparingly.

If you’d like to make your own ginger syrup, keep reading. It’s so easy to make.

All you need to make ginger syrup is fresh ginger, raw organic honey and some water. You’ll want to store it in glass, not plastic. That’s because ginger is very strong, and can potentially eat away at the plastic. A clean jar with a lid will do. However, if you want to give it as a gift, a retro-style glass bottle with a rubber stopper would work really well.

You can also add organic Ceylon cinnamon to the ginger to flavor it. You don’t have to, but ginger and cinnamon go great together. We once had ginger/cinnamon tea in a Korean restaurant and it was amazing. (I highly recommend using Ceylon cinnamon. That’s because this is real cinnamon, as opposed to the cassia “cinnamon” sold in grocery stores.)

Cassia in large quantities can damage the liver. So Ceylon cinnamon is a much better option. Plus, it tastes so much better than cassia.

Anyway, here’s how easy it is to make ginger syrup with honey. You can probably also use powdered ginger if you don’t have fresh ginger. But you’d have to strain it later, using cheesecloth. With fresh chopped ginger, it’s easier to just pick or strain out the solid pieces. So here’s how to make your own DIY ginger honey syrup.

Here is a recipe modeled on how my sister-in-law told me she made her ginger syrup.

4 cups of bottled spring water (I use this because we live in a community that adds fluoride to the tap water.)

A dash of Ceylon cinnamon (optional)

Raw organic honey to sweeten (How much you choose to add depends entirely on your preference for sweetness.)

An easy variation on this would be to skip the cinnamon and add 1/4 cup of fresh lemon juice.

Boil the ginger and water for 30 seconds and then use low heat for another 30 minutes. (Add a little cinnamon if you want.) Add the honey shortly before you take the mixture off the heat. Strain out the solid pieces of ginger and put in a glass container, or a small bottle with a rubber stopper. Keep refrigerated.

This recipe can be either reduced or increased, depending upon how much syrup you want to make. It will last for about a month, so keep that in mind when factoring measurements. However, this recipe will be difficult to make in very small batches, because the water will boil off. 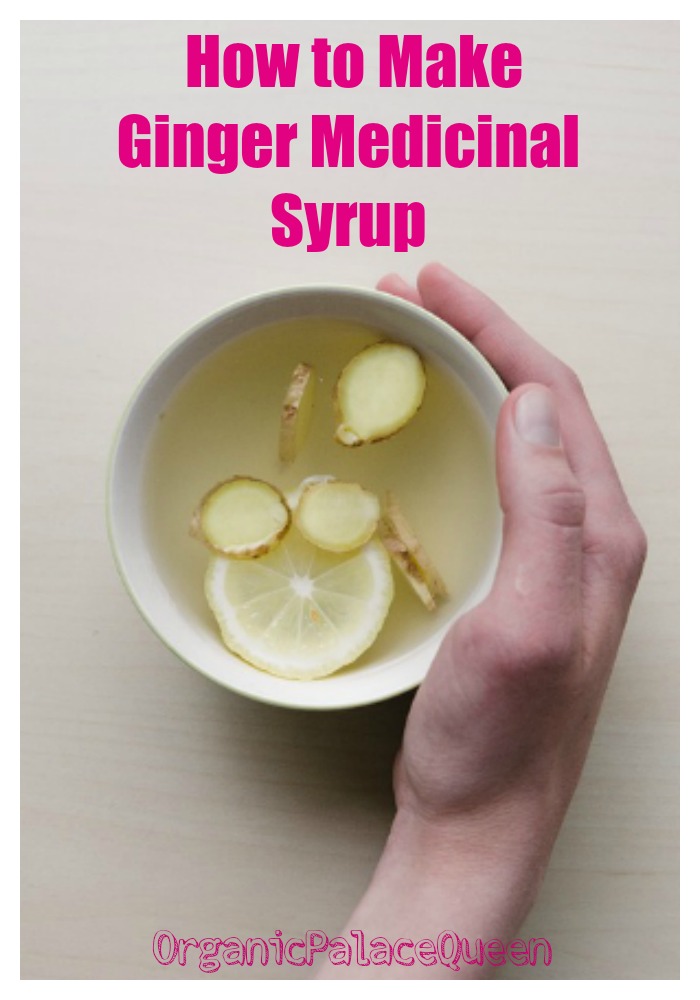 Ginger has been used or ages, to treat a variety of complaints. It’s commonly given to help ease digestion, soothe upset tummies and support the body when it’s fighting an upper respiratory infection.

In recent years, ginger has become very popular, in both culinary and medical applications. It’s believed that ginger root contains natural anti-inflammatory compounds. So it’s potentially useful for chronic pain, such as arthritis and fibromyalgia.

But everyone is different. I have chronic pain and don’t find much relief with ginger. (Other herbal remedies work much better, at least for me.) But ginger is a popular ingredient in herbal anti-inflammation blends. So it must have potential benefits for the right individuals.

When I was young, my grandmother used to give me ginger ale when I had the stomach flu. Ginger syrup can be added to bottled sparkling water to make a sort of homemade ginger ale, minus the high-fructose corn syrup, which many holistic health experts believe is toxic.

Ginger tea and ginger syrup are popular cold-fighting remedies. Actually, if you have ginger syrup it’s really easy to make ginger tea. Just add a teaspoon of syrup to a cup of hot water.

If you choose to use ginger syrup to fight a cold, you probably want to limit yourself to 1 or 2 teaspoons a day. That’s because ginger is a powerful herbal remedy. So treat it like a drug. Even though I’m not a doctor and can’t give medical advice, I can pass along common knowledge on herbal medicine.

Ginger syrup is a great support when you are sick.

When I’m fighting a cold I like to combine herbs with the appropriate homeopathic remedy.

You can read about the top homeopathic remedies for colds and flu here.

People with chronic health conditions should check with their doctor before taking ginger or any other herbal remedy. Ginger root should not be given to children under the age of two. I have immense respect for the power of natural medicine. The more I use it, the more I appreciate the fact that it’s real medicine. I only take as much as I need, and I stop taking it when it’s done its job.

These statements have not been approved by the FDA. These products are not intended to diagnose, treat, cure or prevent any disease. Women who are pregnant or nursing should not use herbal or homeopathic remedies unless directed to do so by a healthcare professional.

Research On Ginger As a Medicinal Remedy 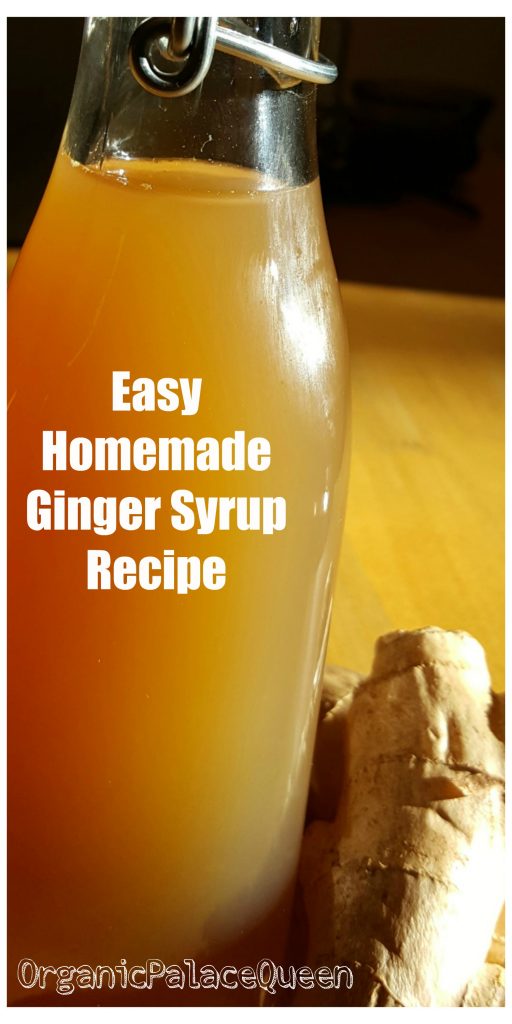