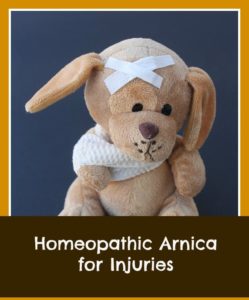 Please understand I’m not a doctor of a professional homeopath. I’m a Mom who’s used homeopathy to help keep her children healthy.

I’m sharing our story of a positive experience with homeopathic arnica, for informational purposes only. I don’t mean to imply that anyone reading this will see the same results.

One day, when my children were little, they found a plastic bin. This was on the second floor of our house. They moved it to the top of the stairs. Then, they climbed in and slid down.

At the foot of the landing was a metal heating unit. They collided with it. Both of them suffered head injuries.

Fully prepared to rush them to the emergency room, if I needed to, I reached for a bottle of homeopathic Arnica montana. Fortunately, they were alert. They weren’t bleeding. If blood was flowing from their head, they probably would have needed another remedy.

I put one pellet in a small plastic water bottle. Then, I shook it hard a few times.

I quickly gave them each a sip. Next, I called our homeopath. She assured me I’d given them the right remedy. But she thought I should have given them a higher potency.

I watched them closely, in case we needed to bring them to the emergency room. As a nervous mother, I knew the signs of serious head injury, which require medical attention. These include dizziness, vomiting, lethargy and confusion.

In the case of a serious head injury, there would have been internal swelling.

Instead, within a few minutes of taking the remedy, my children were acting as if nothing had happened.

In the meantime, I had also called our pediatrician, just to check in. I was told to watch them. If anything changed, I should take them to the emergency room. Also, I was told to bring them if I felt they needed be checked.

A few times over the course of the day, they did seem a little less lively. This is when I’d give them another dose of Arnica. Again, within minutes, they were up and running around.

My homeopath told me it’s important to repeat doses only as needed. If everything seems fine, don’t give an extra dose.

Needless to say, this was a very long and anxious day. But as each hour passed, the likelihood of my children suffering a concussion or a lasting head injury diminished. (In retrospect, I’m also happy they weren’t subjected to a strong dose or radiation, if the ER doctor wanted to do a CT scan. Although this test is often necessary, it involves massive radiation exposure.)

That night, they went to bed a lot later than usual. I also woke them several times during the night, just to make sure they were okay.

The next day, they appeared perfectly fine. It seemed as if we had averted a crisis.

Arnica montana is probably the best-known homeopathic remedy. It’s usually the first choice for falls, sprains and other injuries where there’s no external bleeding. My own homeopath believes this remedy should be in everyone’s house. I totally agree with her.

Although it’s not meant to be a substitute for regular medical care, it certainly seemed to benefit my own children. They bumped their heads pretty badly. It appears as if arnica helped with rapid healing.

Arnica is usually one of the primary remedies new parents purchase, to have on hand in case of emergencies. Homeopathic arnica is made from a yellow flowering plant also known as Leopard’s Bane or Mountain Daisy. It is native to Europe, where it has been used as a herbal folk remedy for centuries.

Homeopathic remedies are highly diluted versions of the original substance. They’ve been developed through the years by experiments involving “provers.” These volunteers take repeated doses of a remedy to see if they can “prove” it by exhibiting specific symptoms, which are then recorded. Homeopathic “proving” of arnica montana would cause swelling and bruises.

Although homeopathic remedies are sold over the counter, you’ll get the best results working with a professional homeopath, especially for chronic conditions, such as allergies. Please consult a physician for all medical questions.

Years later, after my children had recovered, I twisted my ankle. This happened during a walk in my neighborhood. This injury was painful. I barely made it home. My husband found my arnica, and I took one pellet. (Normally, it’s better to put dry pellets in water. But under the circumstances, I needed to take it fast. The Arnica was in my system within about five minutes, after my injury.

My ankle didn’t well. There was no discoloration. Once again, Arnica appeared to save the day.

These statements have not been approved by the FDA. These products are not intended to diagnose, treat, cure or prevent any disease. People with health concerns should discuss them with a doctor. Women who are pregnant or nursing should not use homeopathic remedies, unless under the direction of a healthcare professional.

I’m not a healthcare professional, so all of the above statements are my personal opinion, presented only as information and discussion. They are not intended as medical advice.