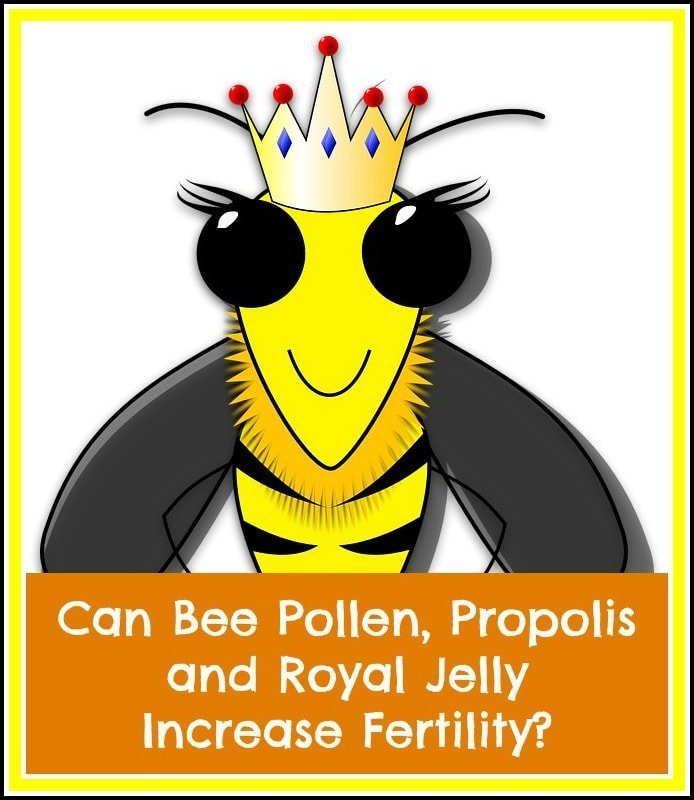 Is it true that bees can make you more fertile?

Although it seems unlikely, three different substances produced by bees are now being used as dietary supplements. It appears as if they’re taken to increase the chances of conception, among other things.

One is natural bee propolis. This is widely available in health food stores and online. Propolis, in case you didn’t know, is produced by bees and used to seal their hives. It contains a mixture of sap and plant matter. Propolis also contains local pollen. There is some evidence that it can possibly help women with endometriosis.

One Egyptian study found that women with mild endometriosis had a greater chance of becoming pregnant after taking bee propolis. Out of the women who were studied, 60 percent who took this supplement became pregnant after nine months, compared with only 20 percent in the control group, who were given a placebo.

It’s also believed that bee pollen can make conception more likely. Please understand that I’m not a doctor, so I can’t give medical advice. Nor can I claim that any bee product will help bring new life into the world. All I can do is tell how bee products are currently being used.

If I were going to use natural bee pollen or any other bee substance, to help improve my fertility, I’d first want to make sure I wasn’t allergic to bees. I’d also want to choose pollen from an organic farm, because it would greatly lessen the risk of chemical contamination.

Okay, I’ve saved the best for last. Bees are best known for their honey. In recent years, though, it’s become very fashionable (once again) to use other bee products for their potential health benefits. These natural remedies have been used for eons to treat a wide range of conditions.

One little-known bee product is royal jelly. It appears to be gaining a lot of attention as a supplement that can possibly work as a natural fertility aid. Animal studies support this idea.

Here’s one reason why this substance is now being considered as a potential natural fertility aid. Royal jelly is produced by worker bees. It’s fed to the developing bee larvae, for just a few days, as well as to the future queens. This is the only food a queen will eat throughout her entire life of 5 to 6 years. By contrast, worker bees live only about six weeks.

Female worker bees, which don’t consume a steady diet of royal jelly, are sterile. Queen bees are highly fertile. They lay about 2,000 eggs a day. The only biological difference between queens and workers is the royal jelly. This is the substance that turns a worker into a queen.

Not surprisingly, there’s been a great deal of speculation as to whether royal jelly can help human infertility.

Animal studies on royal jelly and fertility, so far, have been very encouraging. The little research that’s been done has showed that sheep given this supplement had a higher conception rate. Human research, however, is lacking. But there’s probably a likely reason why.

There’s little incentive for the huge infertility industry to fund and support such research. It’s estimated that Americans spend more than $2 billion a year on fertility treatments.

You may not find royal jelly in your local grocery store. Fortunately, though, you can easily obtain it online. This natural remedy is sold by YS Eco Bee Farms, an organic bee farm.

About 10 percent of couples of reproductive age had trouble conceiving or carrying a pregnancy to term. In the United States alone, this adds up to 6.7 million couples.

Each IVF cycle, for instance, can cost more than $12,000. This is often done repeatedly, as success rates can vary widely, depending upon the age of the hopeful mom-to-be. Even after multiple attempts, conception often doesn’t happen.

In addition to being expensive, assisted reproduction may conflict with some people’s religious beliefs.

So, naturally, I’m very happy to share any information on something that’s gained a reputation as a natural fertility remedy, despite the fact that studies haven’t yet been done in humans, at least as far as I could tell.

Why Royal Jelly is Good for You

Royal jelly is very rich in nutrients, including B Vitamins (in their natural form), a number of minerals and amino acids. It contains a lot of natural L-arginine, often recommended by doctors to boost male fertility. There may be many other beneficial ingredients as well, which have yet to be identified and studied.

One substance in royal jelly that probably attracts the most attention is royalactin. This is the compound that scientists believe is primarily responsible for being able to somehow transform a regular worker bee into a queen.

If you’re still not decided which type of natural bee substance is best for you, there’s also a combination supplement that contains propolis, pollen and royal jelly in one capsule.

This formula is made by YS Eco Bee Farms, where I buy my own organic honey.

After trying to conceive for six years, and suffering multiple miscarriages, I finally gave birth to two sickly children. Through the benefits of hindsight, I realize my husband and I were not healthy when we became parents. We were also not eating well, not recognizing the connection between good health, optimal nutrition and fertility.

Fortunately, this information is now much more readily available on the Internet. Various herbal remedies for conception have been available for centuries. For just about every medical condition, infertility included, there’s also a more natural approach.

These statements have not been approved by the FDA. These products are not intended to diagnose, treat, cure or prevent any disease. People with health concerns should discuss them with a doctor. Women who are pregnant or nursing should not use herbal remedies, unless directed to do so by a healthcare professional. Anyone who is allergic to bees should not take royal jelly.

How Long Does it Take Fertility Blend to Work?