Does Milk Cause Breast Cancer and Should We Be Concerned?

Some medical experts worry that milk may cause breast cancer. But is there enough evidence to warrant changing our diets?

Many women live in fear of being diagnosed with breast cancer. It’s now an epidemic.

This year, in the United States alone, about 240,000 women will learn they have breast cancer. We all know someone anwho’s fought this disease and lost the battle.

Breast cancer is striking older women, as well as younger women, at an unprecedented rate. Unfortunately, the available treatments are far from perfect. That’s why there’s so much fear.

Women who discover a lump in their breast, or have a suspicious spot flagged on their mammogram, will then have a biopsy. If cancer is found, surgery is usually the next step. Sometimes, the removal of both breasts is recommended.

Patients typically undergo surgery, unless the cancer is very localized. This involves the use of toxic drugs that result in hair loss, appetite suppression and a host of other side effects, some of which can be life threatening.

Perhaps, though, there’s a way to prevent this devastating course of events from happening in the first place. A few researchers are now looking at the possible link between dairy consumption and breast cancer.

Is it possible to prevent this horrible disease, by kicking the milk habit? At least one researcher named Jane Plant, PhD believes milk may fuel breast cancer. (You can read more about her below.)

Does Milk Cause Breast Cancer and Should We Be Concerned?

Going milk free is something many alternative health practitioners recommend, especially if a patient suffers from cancer or an autoimmune disease. Some mainstream medical doctors share the same sentiment.

That’s because there’s a small, but growing body of evidence that milk may be a contributing cause of breast cancer.

Does Cow’s Milk Cause Breast Cancer?

Please understand that I’m not a doctor. I can’t give medical advice, tell you to stop drinking milk or suggest that not drinking milk will cure breast cancer. I can never claim that any one remedy or natural approach will solve anyone’s health problems. People with health concerns should discuss them with a physician.

So all I can do is share other published information, as well as my own experience. I don’t drink cow’s milk because I had a breast cancer scare. Also, I have severe nerve inflammation. A dairy-free diet seems to help.

Even though milk was one of my favorite foods, I don’t miss it. My health has greatly improved, even though I can’t prove that going dairy free was a big factor.

Also, good milk-free substitutes exist. For instance, I found an incredible beef stroganoff recipe that used coconut milk instead of cream. I found this recipe on Real Plans, a healthy food meal planner that makes eating real food so much easier.

The link between cow’s milk and breast cancer is tentative. But it is concerning.

One study published in the Journal of Dermato-Encocrinology, which appeared in 2009, explored this possible connection. Researchers found definitive correlation between drinking milk and developing breast cancer, as well as breaking out with facial acne, a condition that’s also subject to hormonal influence.

What facgtors are fueling the increased incidence of cancer? One factor may be something called Insulin-like Growth Factor 1, or IGF-1, according to one school of thought. Although we need a small amount of IGF-1 to maintain our health, milk may cause the levels of this protein to spike. It’s this excess that may spark the development of breast cancer, as well as tumors of the prostate.

This isn’t the only evidence linking dairy and breast cancer. A separate body of researchers at Kaiser Permanente tracked a large group of women with breast cancer. Those who consumed high-fat dairy products in this controlled study were statistically more likely to succumb to their illness.

Some believe the powerful dairy industry has led us to believe we need cow’s milk in our diet. But other voices, such as the author of Got the Facts on Milk, which you can see below raise some doubts. 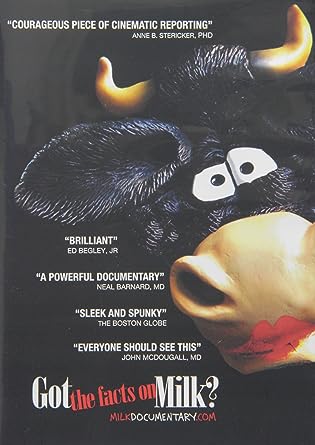 Got The Facts On Milk DVD

The Work and Recovery of Dr. Jane Plante, Ph.D.

Some of the most compelling anecdotal evidence, though, comes from a woman named Dr. Jane Plante, Ph.D., who has survived five bouts with cancer. She didn’t conduct any double-blind controlled scientific studies on whether the theory that drinking milk plays a role in whether or not we contract breast cancer.

Instead, she has first-hand knowledge.

Her children were young when she was originally diagnosed. Miraculously, she managed to defeat the disease when it returned, again and again. But it looked as if she would lose her fifth round, as the tumors were multiplying and growing quickly.

One tumor surfaced on her neck and her doctors gave her the “get your affairs in order” talk. But, instead, she put her research skills to use and got to work, trying to find the cause of her recurrent cancer.

Can Drinking Milk Cause Breast Cancer?

With time running out, Dr. Plante realized her dairy consumption might have something to do with her poor health. Her professional work, as well as her husband’s, had put them in contact with people from China.

Her husband had traveled to China. He was familiar with Asian culture. Combining their knowledge, they stumbled upon the fact that Chinese women rarely get cancer. Unless, that is, they adopt a Western diet. That’s when this protection seems to disappear. Then, they develop the disease at a similar rate to women living in the United States and Europe.

After adopting a milk-free diet, Dr. Plante’s neck tumor started to soften and regress, according to other published reports. Now, more than 20 years later, she remains healthy, without a recurrence of her cancer. You can read her story in the book below.

The suspicion that milk isn’t good for you has gained ground. It’s even starting to go mainstream.

Another expose on dairy is Whitewashed, which you can see below. It’s written by Dr. Joseph Keon about the milk industry and its effect on our health. He uses scientific studies to support his arguments.

We’ve been led to believe that milk is needed for calcium. Drinking milk, we’re told, will prevent osteoporosis, Dr. Keon shows that people who consume the most milk also have the greatest incidence of bone fractures. He also presents evidence to show that milk consumption may also lead to diabetes and cancer.

How To Give Up Milk Products

For me, going on a dairy-free diet was relatively easy. That’s because my children had severe milk sensitivities when they were young. So, years earlier, I had learned a new way of cooking, even though I continued to consume dairy.

However, I know there’s a learning curve. Dairy is a comfort food. But suitable substitutes exist. If you need initial help planning a dairy-free menu, Real Plans can help. This is a subscription service. But if you need help, I can recommend signing up for just a month, until you’re up to speed on dairy free cooking. You can find more information by clicking on the link below.