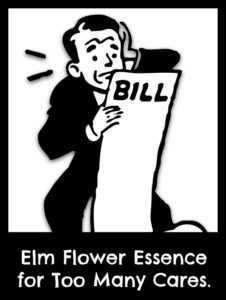 Are you bogged down with worries? Do you feel trapped by pressing responsibilities? Are you burdened by the thought of all you have to do? Is your situation paralyzing, because, perhaps, you’ve taken on more than you can handle? Is all of this angst beginning to make you doubt yourself?

This is the mental profile for which elm flower remedy was created. Elm essence is one of the homeopathic formulas developed by the late Dr. Edward Bach. MD.

A British physician, he  devoted most of his career to studying the connection between human health and negative emotions. He believed there was a strong association between the two, and that mental strain could lead to physical symptoms and even serious illness.

Dr. Bach arrived at his theory after recovery from “terminal” cancer. As a young doctor, he was given just a short time to live. Determined to leave a legacy behind, he threw himself into medical research. However, instead of advancing, his disease disappeared. This led him to abandon conventional medicine. He then became a homeopath.

Eventually, Dr. Bach tried to find a homeopathic solution to mental distress. He developed 38 flower essences. These are homeopathic dilutions of common flowering plants. He believed each remedy can address specific emotional states, including excess worry, impatience, a tendency to be critical and a vague sense of dread. Mixing several remedies together would result in a custom remedy, highly specific to the individual.

For instance, people who use these remedies may pick a set of overriding emotions. Then they choose several (or even 6 or 7) essences that best match their condition, according to the British-based Bach Center. These remedies are then combined in a treatment bottle and taken as needed.

At various times in my life, I’ve taken these gentle remedies. Although I’m only offering anecdotal evidence, they seem to work well for me. I have never mixed them together, in a custom blend. Instead, I’ve taken one at a time. However, during a period of intense stress, I did take a special blend created by Dr. Bach known as Rescue Remedy. This is perhaps the most famous of his creations.

Please understand that I’m not a professional homeopath. But I do consult with one. When I’m using Bach remedies (or any homeopathic formula), she tells me that less is often more. Even though flower essences are very safe, she tells me to stop taking them when I feel they’re no longer needed.

Anyway, elm flower essence is the remedy selected by Dr. Bach for people troubled by their present responsibilities. Even though they may enjoy great success, in their personal and professional lives, their happiness is marred by anxiety that somehow, they won’t be able to cope with all they have to do. 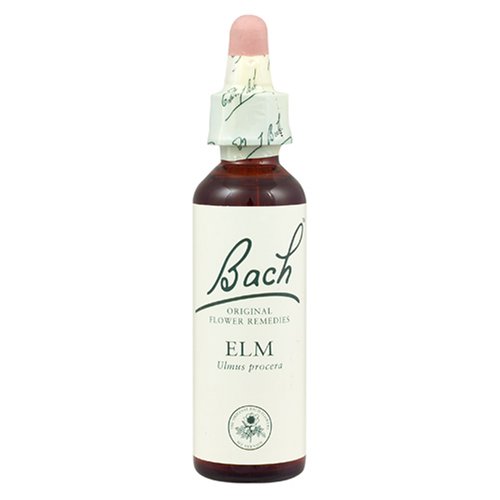 Bach Elm is made from the flower buds of the English Elm tree. Dr. Bach, before his death in 1936, conducted extensive research into the healing properties of various flowers that grew in his native England. The Bach Center, located in the UK, continues to make his findings available to the public.

These statements have not been evaluated by the Food and Drug Administration. This product is not intended to diagnose, treat, cure, or prevent any disease. Women who are pregnant or nursing should always consult with a healthcare practitioner before taking a homeopathic remedy.