Unless you’re a Biblical scholar, chances are you’ve never heard of galbanum. This resin, mentioned in the Book of Exodus, was used by the ancients for healing. It was also burned as incense.

This resin was mentioned in Chapter 30, verse 34, when Our Lord told Moses to “Take unto thee spices, stacte, and onycha, galbanum of sweet savour, and the clearest frankincense,” when preparing incense.

Galbanum is also available, in modern times, as an essential oil, although a relatively unusual one. Scientifically, it comes from a plant known as Ferula galbaniflua. It grows in some of the mountainous areas of Iran.

This resin has been used since ancient times as a medicine. It was one of the remedies said to be used by Hippocrates.

It’s believed that galbanum essential oil has a number of potential health benefits for us today. Similar to some of the more popular essential oils, it likely contains powerful compounds that can possibly help relieve inflammation. Many alternative health practitioners believe excess inflammation is what triggers the disease process.

Also, it appears that galbanum oil is a powerful germ-fighter, at least according to one Romanian study.

On its website, the West Coast Institute of Aromatherapy explains that galbanum oil has antispasmodic properties.

Because I suffer from a nerve condition that could cause painful muscle spasms, I often use antispasmodic essential oils as one of my symptom-fighting weapons. (In addition, I take various homeopathic and herbal remedies.)

Galbanum also appears to have an affinity for the skin, and may be used to reduce the appearance of scars, according to Edens Garden, which sells this relatively uncommon oil. As with other essential oils, galbanum also has been used to treat infections, especially those present on the skin. Edens Garden noted that galbanum oil could be used to support your body when it’s fighting the cold or flu.

If you’re sick with a cold, galbanum essential oil could potentially be used for chest massage. However, you’d first need to mix it with a carrier oil, such as olive or coconut oil. That’s because essential oils are too strong to put on your skin unless they’re diluted. A standard recommended ratio is 1 drop of aromatic oil to one teaspoonful of carrier.

There are very few studies done specifically on this aromatic oil, as much modern research appears to be geared toward bringing new drugs to market. But one Romanian study did find that galbanum killed Staphylococcus aureus bacteria in a laboratory setting. The authors noted that it did this so well that it could potentially be used as “a suitable case for treatment of infectious diseases that are caused by S. aureus.”

The galbanum oil below is made by Edens Gardens, one of the larger and better-known essential oil American-based aromatherapy companies. It don’t distribute through multilevel marketing channels. Although I’ve purchased some MLM oils, and will do so again on specific occasions, I’ve found that most of the time I don’t need to, provided I buy from a reputable company committed to ensuring that their oils are pure. Edens Garden oils come from plants that are grown without pesticides, herbicides or other potentially toxic chemicals. 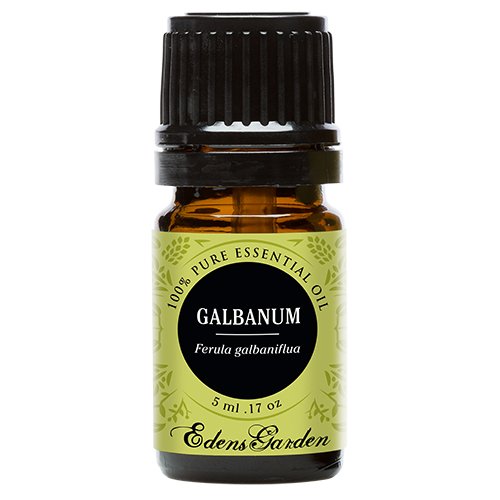 One of the benefits of using a more unusual oil, such as galbanum, is that it allows you to rotate your oils. For me, aromatherapy seems to work much better when I don’t use the same oils continually.

These statements have not been evaluated by the Food and Drug Administration. This product is not intended to diagnose, treat, cure or prevent any disease. Women who are pregnant or nursing should not use essential oils.