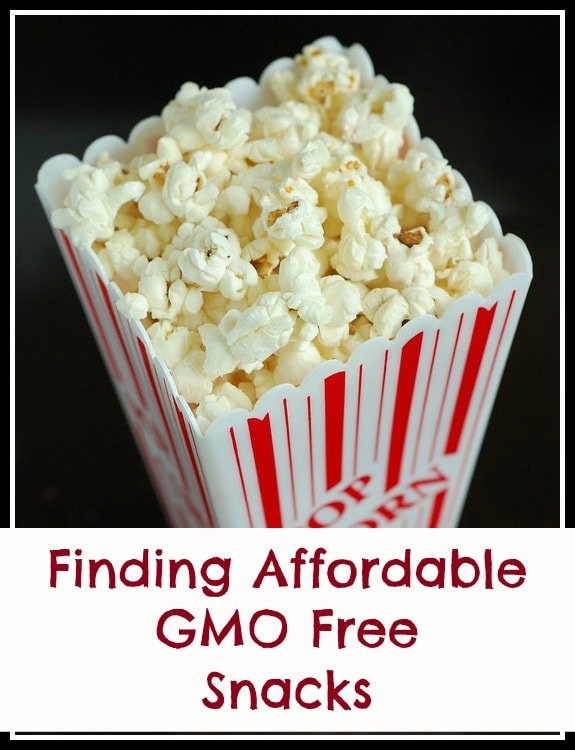 A couple of years ago, I brought GMO-free snacks to my family’s annual Fourth of July cookout.

(This post contains affiliate links. If you click and purchase anything I receive a commission at no extra cost to you.)

Organic and non-GMO snacks are more expensive, if you compare them to the usual big-name and generic brands. But the price difference narrows if you shop carefully. I now buy a lot of my foods at Vitacost, a large online health food store that offers regular discounts on top of its already low prices.

For me, this is the most convenient and efficient way to shop. Vitacost prices are typically lower than what I’d find at the grocery store. I love having my groceries delivered. Until I started shopping this way, I was running around to different stores, looking for the best prices. I stopped this time-wasting activity, thanks to Vitacost. If you’ve never shopped at Vitacost, you’re in for a treat. It carries more than 45,000 items, including a lot of organic and gluten free foods.

I used to shop for my GMO-free packaged foods at discount grocers and overstock stores. I live in an area where these outlets about.

However, I realized I was spending far too much time shopping. I do need to watch my grocery budget. Shortly after we switched to organic food I realized I was spending so much money we didn’t have enough left over for anything else. So I had to change my habits. That’s when I started going from store to store. Thankfully, this has stopped, since I’m shopping at Vitacost.

One of my favorite brands of corn chips is Late July. My local grocery store sells them. Vitacost sells them at the same price. But I’d rather get them at Vitacost because I use one of its coupon codes running that week. So they end up being less expensive if I order Late July corn chips online, and place my order so I get free shipping.

Where to Buy Snacks Without GMOs

One of my favorite GMO-free snacks is Beanitos Original Black Bean Chips. These are a more expensive at Vitacost, compared to what I’d spend at a local discount/closeout store. However, this store rarely carries these delicious gluten-free chips, made from black beans and rice.

The first time I had them was at a friend’s house. Since then I’ve been hooked.

Beanitos are not USDA-certified organic, but they have no trans fats, preservatives or MSG. They are also seasoned with sea salt, a healthier alternative to table salt. The only problem with these chips is that they’re so good it’s hard to stop eating them.

Potato chips are not a health food. Still, every now and then we like to indulge.

But when I do I make sure the brand I buy has a USDA certified organic label or carries the Non-GMO Project label. This means the chips are free of GMO’s.

You can find a variety of certified organic potato chips at Vitacost, and you’ll probably pay less for them online than at the grocery store.

Where Can I Buy Mary’s Gone Crackers?

Mary’s Gone Crackers are delicious little crisps made from brown rice, quinoa, flax seeds, sesame seeds and seasoned with herbs and spices. It’s hard to believe these four base ingredients could be fashioned into something that tastes so good.

Again, one problem is that it’s hard to eat just a few Mary’s Gone Crackers crackers. If you’re not careful it’s easy to eat most of an entire 6.5-ounce box in one sitting. I also brought these delicious organic crackers on my cross-country trip. They made a delicious and filling snack.

Where to Buy Snacks Without GMOs

My relatives aren’t particularly fussy, and anything we brought to the Fourth of July cookout would have been greatly appreciated. But it’s hard to bring food anywhere, knowing it contains genetically modified ingredients, and realizing your loved ones will be eating it.

Some people think we shouldn’t worry about GMOs. But they should know that people in Europe generally don’t eat genetically modified foods. That’s because the European Union has labeling laws. Because people don’t buy products with GMOs, the grocery stores don’t carry them.

Other countries, such as Peru, have banned genetically modified food. American corn cannot be sold in Russia. That’s because the vast majority of US corn comes from genetically modified seed. If you like to eat popcorn, you may be interested in Vitacost’s organic kernels, so you can pop your own at home.

This is done so the corn can survive applications of Roundup, a controversial weed killer. One group of French researchers have found that lab animals fed GM corn had an increased propensity to develop breast cancer.

That’s one of the reasons I like to serve GMO-free foods in my own house, and why I like to bring healthier snacks to my family gatherings. Ordering from Vitacost makes this easy.

Where to Find Organic Food Coupons