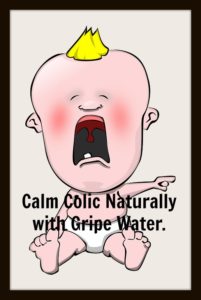 Gripe water is a natural remedy designed for baby colic.

Colicky babies are a challenge, to say the least. I distinctly remember trying to care for my firstborn. She cried every afternoon, beginning at precisely 4 pm. This would last well into the evening. There was little I could do to console her, other than put her in the car and take her for a long ride.

She’d stay asleep as long as we were moving. But the screaming would often start again the minute we pulled up in front of house, and turned the car off.

I used to joke that I didn’t know what my daughter really looked like until she was four months old. That’s because she was so fussy that it seemed as if she was either sleeping or screaming.

So, with my second child, I wasn’t taking any chances. Before he arrived, I stocked up on a popular over-the-counter remedy sold in the drugstore. The active ingredient was simethicone, and I gave it to my child as a preemptive strike against colic.

However, all drugs can have side effects. This one had the undesirable reaction of making my baby extremely constipated. He didn’t need it anyway, because he was such an easy baby.

New mothers today have many more options. That’s because there’s growing awareness that natural, plant-based remedies are safer and oftentimes more effective, for many problems, compared to anything created in a laboratory.

If your baby has colic, please discuss this problem with a pediatrician before trying a home remedy. I’m not a medical professional, just a mother who likes to use natural remedies.

One natural remedy being rediscovered is gripe water. It was developed in the mid-1800’s by a British pharmacist.

One of them is gripe water, developed in the mid-1800’s by a British pharmacist. Various versions of natural gripe water are still sold today as dietary supplements.

This herbal remedy is now manufactured by a number of companies, but I decided to show you the Wellement brand because it is organic, and it contains no alcohol, parabens, GMOs or artificial ingredients. It comes in a glass bottle, so there are no worries about phthalates or BPA.

The active ingredients in Wellements Gripe Water are ginger, fennel and chamomile, an herb especially known for its calming effects on children. Ginger and fennel are often recommended as digestive aids. 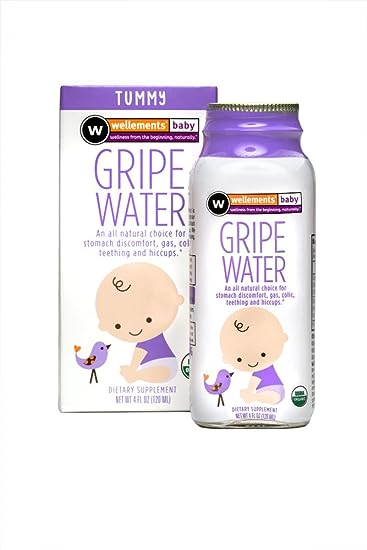 These statements have not been evaluated by the FDA. These products are not intended to diagnose, treat, cure, or prevent any disease. Women who are pregnant or nursing should not use herbal remedies unless directed to do so by a healthcare professional. This article is not intended as medical advice and parents with health concerns should consult with a pediatrician.