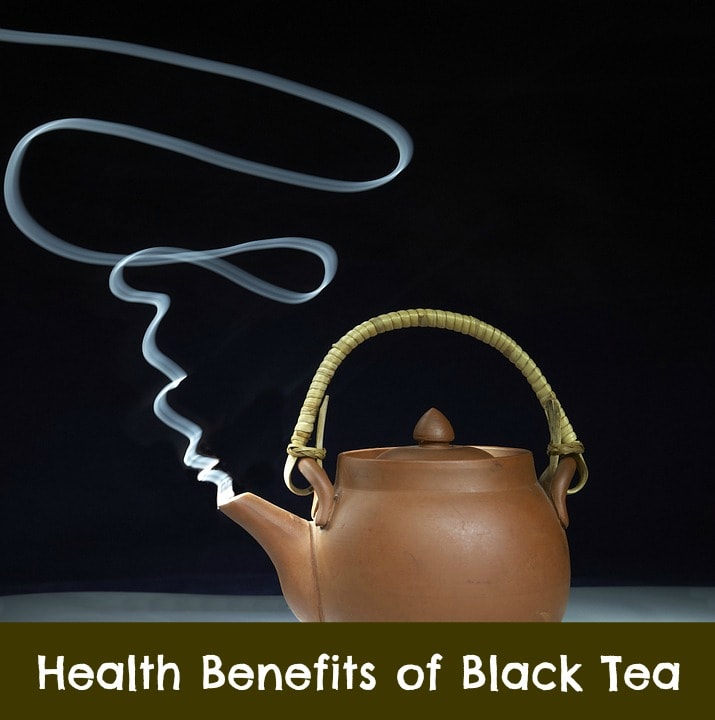 There’s an old story that the first person to ever sip hot tea was a Chinese emperor named Shen Nung. He lived 4,000 years ago. Possibly, here’s what happened. He was kneeling or standing in front of a kettle of boiling water. Then, some leaves happened to fall into the water.

Intrigued by the pleasant smell, he decided to drink some of this water. Thus, he became the world’s first tea drinker.

Another version has the emperor sipping on a cup of hot water. Suddenly, some aromatic leaves blew in. History was made. The first cup of tea was consumed.

In any event, tea is now the second-most popular beverage in the world. (Water holds first place.) From China, the practice of tea drinking has spread across the world.

Tea is also my favorite beverage. It’s delicious and it also has some healthy benefits. In recent years, we’ve been hearing a lot about green tea. But black tea is also good for us.

Are There Health Benefits to Drinking Black Tea?

Most days, I drink three to four cups of strong black tea. But I make sure it’s USDA certified organic tea, which I buy online at a discount. That’s because unhealthy levels of pesticides have been found in conventionally processed teas from China and India.

Europe appears to be the first place, outside of Asia, where tea drinking was embraced. These tea leaves came from a plant scientifically known as Camellia sinensis. There are disputing accounts of how tea arrived on the European continent. It appears this happened sometime in the 1500’s.

According to Victoria Zak, author of 20,000 Secrets of Tea: The Most Effective Way to Benefit from Nature’s Healing Herbs, dried tea made its way to Venice by way of a Persian traveler. However, another version credits Portuguese missionary priests with bringing tea back from China.

In any event, Zak, an authority on the history of tea drinking, notes in her book that tea was regarded by European nobility and gentry, the only ones who could afford it, as a health tonic capable of curing disease.

We now know that black tea, made from fermented leaves, is very healthful. People who regularly drink black tea seem to have a reduced incidence of diabetes, possibly due to naturally occurring compounds that help stabilize blood sugar levels. There is also evidence that tea can help maintain healthy bone density.

The brand of black tea I drink is shown here. I order it from Vitacost, because it is so affordable and just around the same cost I’d pay for conventionally grown tea I’d buy in the supermarket. With Vitacost, I’m able to combine my purchases in order to get free shipping. So I always end up spending a lot less than if I were to shop locally. Vitacost offers ongoing coupon codes and special deals, on top of its already low prices.

Green tea comes from the same as black tea, although, during processing it is not fermented. The tea leaves are simply dried or steamed. Green tea has earned itself a reputation as being able to prevent cancer, due to a specific antioxidant known as epigallocatechin-3-gallate.

Tammy Safi, author of Healing Teas: Green-Black-Herbal-Fruit. notes that tea is traditionally served at every meal in Asia. That’s because it’s considered good for digestion.

She also explains that different teas work better with different people, and at different times. Black tea, she notes, has an entirely different effect on the body than green tea, even though both come from the same plant. Black tea is warming and facilitates digestion, according to Safi. Green tea, on the other hand, has a more cooling action and cleanses the system. She recommends drinking green tea between meals, rather than with meals.

Safi notes that herbal teas are becoming increasingly sought after, as people realize they can have strong medicinal benefits.

Although tea is very healthful, it’s possible that a lot of its benefits will be lost (or counteracted) if you drink a brew that’s not organic. A study released by Greenpeace International found unacceptably high levels of pesticide contamination in a wide range of Indian teas, sampled at different times and in different cities across the subcontinent.

Pesticides were found in 95 percent of the samples. The majority of the tea tested had 10 or more chemicals. How they interact together is anyone’s guess, because this has not been studied. The entire lot of tea samples contained a total of 35 different types of insecticides.

Much of this tea, according to the report, is shipped to the United States and Europe. From there, it is packaged and sold under popular brands. Even more alarming, some of the tea samples contained DDT, a chemical the United States Environmental Protection Agency considers a “probable” carcinogen.

An earlier report issued by Greenpeace found evidence of toxic pesticide in a majority of Chinese tea samples.

So this is why I only drink organic black tea.

However, there might be a downside to drinking too much tea from the Camellia sinensis plant. Unfortunately, even though tea is delicious, it may contain unacceptably high levels of fluoride, even if it’s harvested organically.

This is yet another reason not to drink some of the brands you find at the grocery store, or at discount outlets.

Evidence compiled by a team of British researchers that suggests that economy teas may contain more fluoride than high-end hand-picked brands. That’s because the cheaper teas are harvested by machinery, which may pick up large amounts of older leaves that contain the most fluoride.

Fluoride is a toxin, and even the natural amounts found in tea can be harmful if consumed in excess. This is why you may not want to drink vast amounts of black or green tea, even though they also provide enormous health benefits. Moderation is the key to healthy tea drinking. Also, since fluoride is a neurotoxin, make sure the water used to make your tea comes from a non-fluoridated source.