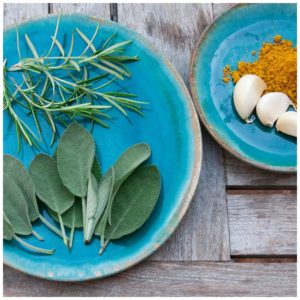 The spices we have in our kitchen cupboards serve a dual purpose. But many people are not aware of this. In addition to adding some zest to our food, these tasty herbs also contain medicinal compounds.

Before the advent of pharmaceuticals, spices were often the first line of defense. They have a long history of use for various illnesses, both chronic and acute. In the Middle Ages, spice dealers were also apothecaries. They knew what spices were best for any given ailment.

With a growing realization that drugs have their limits, as well as potentially serious side effects, many people want more natural solutions. Oftentimes, they don’t have to look far. That’s because they probably have powerful natural remedies in their own kitchen.

However, if you’re serious about using spices, for any reason, you’ll want to invest in certified organic spices. These are grown without dangerous pesticides or herbicides.

Also, if you choose a non-organic spice, there’s a good chance that it’s been irradiated, a practice done purportedly to increase its shelf life. If you don’t already own organic spices, below you’ll see a selection of popular spices from one of the brands I use in my own kitchen. 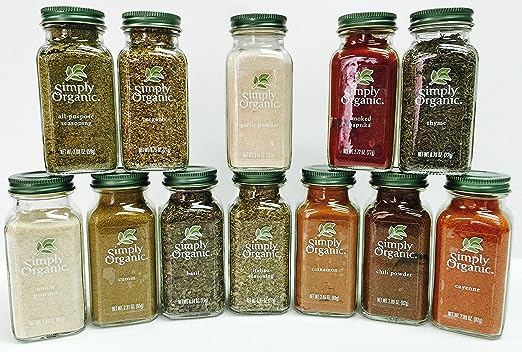 Health Benefits of Spices and Condiments

Healing Spices: How to Use 50 Everyday and Exotic Spices to Boost Health and Beat Disease is written by Dr. Bharat Aggarwal, PhD., a researcher at MD Anderson Cancer Center in Houston. His book describes each of the spices he includes, along with scientific evidence of its healing potential. Dr. Aggarwal also gives the reader suggestions and ideas about how to best use these spices in their diets. Recipes are included.

In recent years, we’ve been hearing a lot about turmeric. And with good reason. This mustard-colored spice has caught the attention of researchers, who’ve discovered that it has a wide range of positive effects on your body. If you were told to choose just one spice to improve your health, this should probably be the one.

Turmeric has been used for centuries in traditional Ayurvedic medicine. The one component that has received the most attention in modern times is a substance known as curcumin, derived from whole turmeric. However, there are likely many other, less studied, compounds that work together, with curcumin. This is why many holistic practitioners recommend whole medicinal herbs, instead of isolated extracts.

Is Turmeric Good for Your Heart?

However, in modern times, curcumin alone has been widely studied. This isolated extract has been shown to curb excess inflammation, which many natural health practitioners believe is the root cause of illness.

Curcumin is also a powerful antioxidant in and of itself. It assists our body’s own defenses to help fight free radicals that wear our metabolism down.

Turmeric is also good for your heart. Researchers have found that curcumin can help prevent various heart problems, including cardiac hypertrophy.

However, perhaps the most exciting news is that this time-tested herbal remedy contains cancer-fighting compounds. Studies have shown, at least laboratory models, that curcumin causes malignant cells to die. It also appears to halt the spread of cancer and to prevent cancerous tumors from forming new blood vessels.

In my house, I use Simply Organic Turmeric for seasoning. (It’s a brand I totally trust because it has a long history of being a leading supplier of organic spices.) When I add it to a dish, I include some organic black pepper. It’s believed that black pepper makes turmeric more bio-available to the body.

Honey and cinnamon is a popular combination in Indian Ayurvedic medicine.

Cinnamon is often recommended by holistic practitioners as a general health tonic. Because it has natural infection-fighting compounds, this herb is sometimes used by people battling systemic candida.

Many people like to include this spice in their diet, with the belief that it contains cancer-protective properties. One 2010 study that appeared in the medical journal BMC Cancer noted that cinnamon extract does appear to curb cancer growth in mice with melanoma.

However, if you are going to use cinnamon in your food, or medicinally, make sure it’s real Ceylon cinnamon. Nearly all of the “cinnamon” sold in grocery stores in America is really cassia.

Cassica is a closely related plant with sticks that look a bit like real cinnamon. But if you look closely, they are darker and hollow. It is also more difficult to grind cassia into a powder.

Cassia also smells different than real cinnamon. Once you taste and smell true Ceylon cinnamon you won’t want to use cassia again. Also, cassia poses a potential health risk in large doses because it contains high concentrations of a chemical called courmarin. This is a toxic substance that can damage the liver. In our house, we use Frontier brand organic Ceylon cinnamon. I don’t see this ever in my regular grocery store. But it’s available online.

Fennel is the spice that gives Italian sausage its distinctive taste. This spice, which tastes a little like anise, adds a warm and pungent flavor to Italian food, or to soups and stews.

This is not one of the most common kitchen spices, but, perhaps, it should be. Modern scientific studies show that this aromatic herb, native to the Mediterranean, can help with a wide range of digestive issues. High in potassium, it also has the ability to help regulate blood pressure. In my house, here’s the brand of fennel seeds I sprinkle on certain meat and potato dishes.

Nearly all spices contain known cancer-fighting compounds, and fennel is no exception. One study that appeared in the September 2011 Journal of Medicinal Food found that fennel extract showed strong anti-tumor activity in mice. Of course, more research is needed to see if this holds for humans, but these results are very encouraging.

Leave a Comment
Previous Himalayan Salt Scrub Recipes
Next How Long Should I Take Zyflamend?