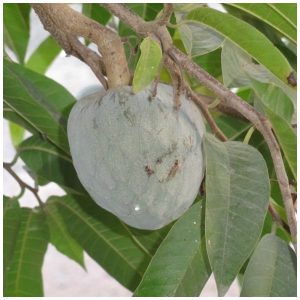 We live in an age when it’s possible to obtain botanic medicines from around the world. One of them is soursop, otherwise known as graviola.

This is a tropical fruit native to the Caribbean and Central America. However, it’s now cultivated in other parts of the world.

There’s a lot of buzz about soursop’s potential as an alternative cancer treatment. There is evidence that soursop extracts can kill certain types of cancer cells in the lab. What’s lacking, though, are clinical trials in humans. In the coming years, hopefully these will be conducted.

Until then, no one can recommend soursop as a viable cancer treatment. I need to stress that I’m not recommending it either. People with health concerns should discuss them with a doctor. Never neglect appropriate medical care because of anything you read on this site. I hope to shed some light on all the hype surrounding graviola and cancer.

I like to tell my readers about herbal teas. That’s because they’re not just beverages. They have medicinal action as well. Actually, some herbalists believe tea is one of the best ways to ingest an herbal remedy. The warm water helps our bodies assimilate the beneficial compounds.

Because I have chronic nerve inflammation, I like to drink herbal tea, because of its natural anti-inflammatory action. Holistic health experts believe that chronic inflammation drives disease. So, if we reduce our runaway inflammation, we feel better.

One of the ways I do this is with herbal tea. I have a number of different herbal teas in my pantry. I rotate them, and avoid drinking the same tea too many days in a row. They seem to work better this way. For instance, I’m sipping on a cup of bilberry tea as I’m writing this post. I’ve also tried chamomile, dandelion, red clover tea and others. Graviola is not part of my natural medicine cabinet. I’m not sure it needs to be. That’s because it doesn’t appear to have benefits as a dietary supplement, meant to be taken long term.

If you spend any time on social media, you’ll probably see graphics of the graviola plant, along with information on its anti-cancer potential. It’s believed this plant contains compounds that naturally fight cancer. However, there’s very little modern research, and no clinical trials that I could locate.

However, one study I found was intriguing. It appeared in 2013, in the  Current Topics in Medical Chemistry. Thje authors noted that graviola extract “has a wide potent anticancerous agents coined as Acetogenins which play a key role towards many varieties of cancer.” (Note that this study looked at graviola leaf extract, and not tea made from the leaves.)

Although this doesn’t mean that graviola will help cancer in a human, it does appear that this plant has compounds lethal to cancer cells in the lab. It’s possible the graviola plant has other potential health benefits as well. However, this isn’t backed up by research.

Given the lack of studies, the health benefits of graviola leaves are unknown. I was able to locate an article by Dr. Andrew Weil, MD, in which he cited work by Dr. Tierona Low Dog, MD. I respect her work and I’ve purchased some of her all natural vitamins, sourced from food and not created in a lab.

Anyway, Dr. Weil noted that graviola leaves have a traditional use as an anti-worm and parasite remedy. Dr. Low Dog, he wrote, does not recommend using graviola leaves as a dietary supplement.

However, if I happened to find graviola fruit locally, I wouldn’t hesitate to buy it. Mixed with mango, it would make a great tropical smoothie. I’d assume it had many of the immune-boosting health benefits of other tropical fruits, even though the research is not yet there.

However, on his website, natural cancer crusader Ty Bollinger notes that researchers have shown that graviola fruit is “selectively toxic” to colon cancer cells. Current chemotherapy drugs, he noted, do not distinguish between malignant and healthy cells. Bollinger is one of my favorite voices in natural cancer options. He’s also written a wildly popular book called Cancer: Step Outside the Box.

Leave a Comment
Previous Aloe Vera Gel And Lavender Essential Oil
Next Is Ground Cardamon Good For You?