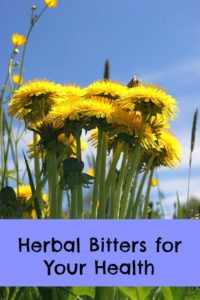 Medicinal bitters have been used for thousands of years, dating at least back to the ancient Egyptians.

Bitter herbs were wildly popular in medieval Europe, and were prescribed as a cure-all and digestive aid. Oftentimes, alcohol was added to these preparations. This undoubtedly led to the custom of drinking a bitter-flavored liquor after meals, as it was considered a very healthy practice.

For American colonists, bitters were a first-line defense for whatever ailed you. Many of the old advertisements for bottled health tonics were alcoholic concoctions, which also contained medicinal bitters.

Before pharmaceuticals became popular, bitters were used to treat infectious disease. One 19th-century physician named Johann Gottlieb Benjamin Seigert was stationed in Venezuela, serving in Simon Bolivar’s armed forces. He developed a formula known as Angostura Bitters, as a way of combatting malaria. Today, his remedy is sold around the world, including online, for its use as a flavoring agent.

Angostura Bitters were the kick behind that whiskey mix of our grandparent’s (or great-grandparents) generation now aptly known as the “Old Fashioned.”

As the name suggests, bitters make your mouth pucker. Many modern herbalists believe that this is a healthy reaction, which stimulates your salivary glands and tones up your digestive system. Because our diets have changed so much, and we’re not accustomed to eating anything that doesn’t taste good. So we’ve lost our taste for bitters. As a result, our digestive organs become sluggish, according to this theory.

However, if we add some bitters to the mix, our bodies will produce the enzymes we need to break down food and toxins, according to this theory.

Alternative health experts pretty much concur that if our digestion is poor, our health will suffer. So herbal medicincal bitters are often recommended for people suffering from chronic or degenerative illnesses.

In my own road back to health, I took many herbal remedies. Bitters were among them. Dandelions are a mainstay of bitter medicinals. Tea made from dandelions is said to be especially good for flushing out your liver and kidneys. If you suffer from ill health, a holistic practitioner will likely recommend a liver detox. One of the easiest and gentlest ways to do this may be with natural dandelion tea.

I will admit this brew tastes horrible, especially the first time you down a cup. You may need to sweeten it with honey. But I’ve also heard that if your body needs bitters, you’ll soon begin to crave them. This is exactly what happened with me. I actually began looking forward to drinking this strong-tasting tea.

Dandelion tea is also packed with nutrients, including zinc, magnesium, calcium and iron. If you’ve been sick, you can potentially use this as a health tonic. I do need to point out, though, that I’m not a doctor. So I can’t promise that any natural remedy will solve a particular health problem. All I can do is share my own story of using herbal medicine.

I suffer from a painfu nerve disease. But I stay symptom free with natural remedies and a healthy lifestyle. Organic dandelion tea has been one of the things I use to reduce my pain level. I drank it for a couple of months, until the taste no longer appealed to me. My holistic health practitioner assured me that this is my body’s way of telling me a herbal remedy has done its job, at least for the moment. If I need it again, I’ll know.

Dandelion tea is considered a good home for people suffering from arthritis and various nerve conditions, as it helps to reduce inflammation. (However, as with any herbal preparation, you need to check with your doctor before taking it.) 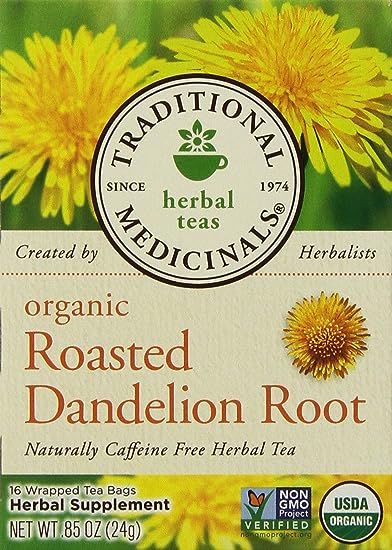 Bitters are becoming very popular again, both among people trying to regain their health, as well as among people who take them, from time to time, as a preventative remedy.

Despite what we’ve been led to believe by many mainstream health sources, herbal remedies are believed to be potent, effective and time tested. Since they’ve been used safely for thousands of years, they are among the most “studied” medicines on the planet.

Urban Moonshine makes an organic bitters formula that contains a number of herbs and essential oils that work in synergy, designed to give your digestive system that boost it needs, to function at peak efficiency. This formula is gluten free.

Bitters are also said to be good for your skin. In my nearly four years of eating organic food and using herbal medicines (by necessity, because I was so sick I could barely walk), putting good things into my body eventually had visible results. My blotchy skin cleared up and I no longer needed to wear foundation or coverage. (However, I do need to say that I can’t promise anyone else will see the same results, by going all natural.)

Anyway, you may not be able to find organic herbal bitters at your local drugstore, but you can order them online.