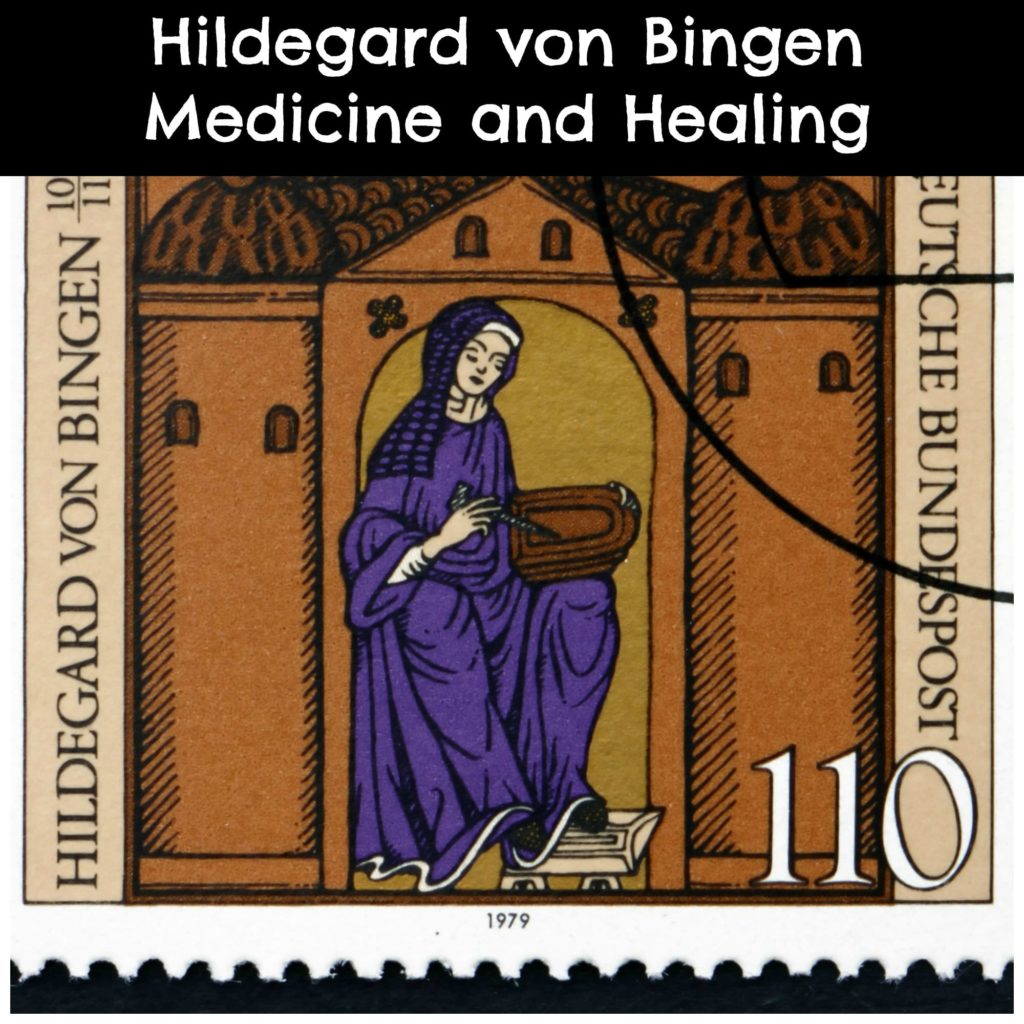 Saint Hildegard of Bingen was a Germany nun. Although she was removed from the world, and died in 1179, she’s suddenly taken center stage.

This remarkable nun developed an advanced form of medicine. She did this, despite the fact she had little contact with people. It appears that her knowledge was inspired by God. She was known to have Heavenly visions.

Although Saint Hildegard died centuries ago, her work is now receiving a lot of attention. This is coming from both Catholic and secular circles.

Her writings on healing have been translated and condensed into an easy-to-read book called Hildegard of Bingen’s Medicine.

In 2012, Pope Benedict XVI officially made her a saint. He also proclaimed her the 35th Doctor of the Church. This is a title given to only a few other woman before her. It means she had reached the heights of sanctity, and was greatly advanced in theological matters.

When she was alive, Saint Hildegard was what we consider a “polymath.” This means she was talented in diverse disciplines. She wrote plays, composed music and was also a mystic, able to communicate in the Heavenly realm.

Saint Hildegard is best known for her insights on healing the human body. Although she received no formal education in medicine, she had a vast knowledge of medicinal herbs, minerals, animal parts and the elements of the earth, all of which could be harnessed to help the sick.

I own a condensed and translated copy of a book she wrote, and I found it to be fascinating. It has also helped me with my own health. For instance, I no longer fret because I don’t eat enough raw food, which I don’t really like. Saint Hildegard believed consuming uncooked food in moderation is bad for you. Perhaps my body is telling me something I needed to know.

I’ve also stocked up on organic fennel seed, which she highly recommended as a health aid. Her book is filled with sage advice on spiritual, emotional and physical health.

In this book, Saint Hildegard knits together the various elements – mind, body, spirit and soul – that must be balanced, in order to remain in good health. This advice is exactly what many naturopathic doctors advocate today.

Hildegard was likely born around 1098. It’s believed she was the youngest of 10 children. Her first mystical experience was said to occur when she was a small child. It’s thought that because of her unusual piety, her parents placed her in the care of an aunt named Jutta, who was a cloistered nun. Jutta was the one who guided young Hildegard, and oversaw her religious formation.

Both Jutta and Hildegard lived in a Benedictine convent. According to some early writings, Jutta was responsible for caring for the sick, a task that Hildegard probably helped with as well.

In medieval times, convents and monasteries often had special wings that functioned as hospitals. Each community likely had one or more members who studied herbs and other types of natural medicine. The book shown above, Hildegard of Bingen’s Medicine, clearly demonstrates the power of herbal remedies, which modern scientists are now taking a fresh look at.

Hildegard’s knowledge, however, was so vast that it’s believed she possessed a supernatural gift, with medical expertise far surpassing that of others who lived during this time period.

Hildegard’s writings on medicine far surpassed what a cloistered nun could have learned on her own. She developed a sophisticated system of diagnosis. Her treatments consisted of using natural substances, such as herbs, tinctures, precious gems and even animal parts.

Sickness and healing, she noted, were under the influence of God. She often restored the health of people who were desperately ill. But, even her best remedies had little to no effect if God had decided it was time for them to depart this earth.

Saint Hildegard realized the medicinal value of certain foods. She also knew that foods affected people differently because of their individual constitutions. However, she believed fennel, spelt and chestnuts were good for everyone.

Fennel was an herb she often recommended. Of course, after reading her book, I did buy some organic fennel seeds. I sprinkle them on a roasted potato and sausage dish I make. Sometimes, I also grind it up and eat it with honey. (It’s delicious that way.)

Throughout her early life, it’s likely Hildegard continued having Heavenly visions. We probably wouldn’t know about them if it weren’t for one communication, which she was instructed to record. These writings eventually became known as Scivias, Liber Vitae Meritorum and Liber Divinorum Operum. These three books focus on theological matters. She called her dialogue with God the “Voice of the Living Light.” Now, Scivias and other books on Saint Hildegard are available online.

While she was alive, Hildegard’s writings received Papal approval. This means they are free of doctrinal error. So Catholics can assume that reading them will help increase their faith.

Hildegard was greatly respected. Various high-ranking Church officials would sometimes visit her or send her correspondence, if they sought her opinion in a particular matter.

After Jutta’s death, she was elected Abbess of her community. During this time, she also founded another Benedictine convent.

However, some were suspicious of Hildegard, even within her own convent. There was controversy within her community. Some considered her visions tricks of the devil, rather than the work of God.

Saint Hildegard’s best known artistic work was a morality play known as Ordo Virtutum. It was wildly popular during the medieval period, and is considered the first of its kind. It is a four-part series of dozens of songs that depict man’s continual struggle between good and evil, and how humans are assailed by the Devil.

Throughout the play, there is dialogue between the Virtues, such as humility. These help us get to Heaven. Then, there’s the Devil, who tempts us to do the opposite of a particular virtue. This is played out in the struggle for a particular person, or soul.

At the end of the play, the temptations are rejected. The Devil and his false promises are rejected. Saint Hildegard’s classic is still performed today.

Although Saint Hildegard’s writings and other works are thoroughly Catholic, she has also attracted a lot of attention in feminist circles. This might be because she was a woman who was really ahead of her time, with a knowledge and wisdom that transcends that ages.

Others who follow a New Age spirituality have also adopted Saint Hildegard. This may have to do with her medical treatises, and her extensive knowledge of herbs and healing stones and minerals. She believed that certain elements had medicinal properties. But she applied it in a way that doesn’t deviate from Catholic teaching.

All of the various plants and elements found in nature, she believed, were gifts from God to help us recover if we get sick.

Some Catholics are concerned that Saint Hildegard’s writings may be misinterpreted by those with an agenda to present them in a light not in accord with Christianity.

However, it appears as if we can all learn a lot from the multi-talented Saint Hildegard, and her now famous translated book, no matter what our religious beliefs.

Everything in this article is included only as information, and not intended as medical advice or opinion. People with health concerns should speak to a doctor. Women who are pregnant or nursing should not use any herbal remedy unless instructed to do so by a healthcare professional.