For me, chronic insomnia is no longer a way of life. However, I do think I’ve won the battle. Reducing the overall level of stress in my life has been immensely helpful. But I’ve also used a variety of natural energy remedies, including homeopathy.

(This post contains affiliate links and if you click and purchase something I receive a commission at no extra cost to you.)

One of the natural remedies I use to help me sleep better is a special homeopathic formula called Rescue Remedy. This was originally created by a British medical doctor. I don’t use this every night. Just occasionally, when I’m under extreme stress that would otherwise affect my sleep. There is also a special Rescue Remedy Sleep Formula that’s available. This contains the original Rescue ingredients, plus another remedy designed to help curb negative thoughts that help keep you awake.

For me, insomnia first became a problem when I was first out of college and working at a job that often didn’t end until after midnight. Exhausted, I then drove 45 minutes to my house. But instead of going to sleep, I was wide awake for hours.

Sleep would finally come just as the first rays of sunlight filtered through my window. Then, things became noisy. I found it impossible to sleep during the day. Every dog bark would awaken me. I was roused by the garbage truck. Children’s voices on their way to school would also jolt me out of dreamland.

The insomnia stuck around even after I left this job, and started working days. Sometimes I think the mere worry of not getting enough sleep kept me awake. I’d lie in bed mentally checking off all the things I had to do the next day. How could I get everything done if I didn’t get at least a few hours of sleep?

I’m sure anxiety played a big role in my inability to consistently get a good night’s sleep. Sometimes I’d get enough rest. But it was unpredictable. I lost a lot of sleep because I worried about not getting enough sleep. This was a vicious cycle that needed to be broken.

Nowadays, I don’t worry about sleeping. There’s still the occasional night I find myself tossing and turning. But this is rare. It happens maybe every few months, if that. I can now fall asleep easily. If I’m really tired, I can sleep until 10 am or later, just like I did when I was a teenager. When my insomnia was at its worst, I tended to wake up with the sun. So what’s changed?

In recent years I’ve been using a number of natural sleep remedies, including a special homeopathic formula called Rescue Remedy. Homeopathy works on an energetic level to heal and correct imbalances.

Bach Remedies were developed by Dr. Edward Bach, MD. Although he died in 1936, his formulas now seem more popular than ever. I own a number of them, including the most famous known as Rescue Remedy. This is a blend of five flower essences. The Rescue Remedy Sleep Melt formula contains the original essences, plus white chestnut essence.

During his lifetime, Dr. Bach developed a line of 38 flower essences. These are designed to address negative emotions, such as fear, anxiety, despondence, grief, shock and trauma. Dr. Bach firmly believed that mental distress can lead to physical illness. Rescue Remedy seems designed for acute trauma. Long-term, low-level stress might respond to a different remedy. I do need to stress that I’m not a medical professional. I can’t give advice or promise that any

Bach Rescue Sleep Melts contain homeopathic clematis, Star of Bethlehem, rock rose, cherry plum and impatiens.  These are found in the original Bach Rescue Remedy. These flower essences are a low potency homeopathic dilution. They are considered to be more gentle than regular homeopathic remedies, with a reduced chance of aggravation. (In homeopathic circles, the term “aggravation” means a temporary but harmless worsening of symptoms.)

The Rescue Sleep melts shown here are meant to be used for occasional insomnia. My own homeopath tells me to only take a remedy when it’s needed, and not to use it as a preemptive strike, in an attempt to ward off symptoms. She says to wait until they develop. I own Bach Rescue, as well as a number of other Bach Remedies. They work really well for me, although I can’t promise that anyone else will see the same results. 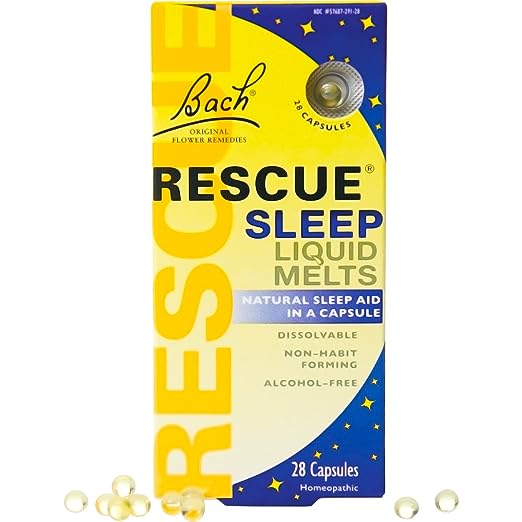 I’ve used by Bach remedies and regular homeopathic remedies for years. Bach remedies are infinitely easier to use, because there are only 38 of them, including the Rescue Remedy formula.

One thing that I believe has really helped with my insomnia is mixing my remedies up. I reserve Bach Rescue for times of extreme stress. But it does help me sleep under these circumstances. Other Bach formulas may be appropriate for more regular use, such as Agrimony Flower Essence. One indication for this remedy is someone who presents a cheerful face to the world. However, inner conflicts and anxiety may prevent them from getting the rest they need.

One of the beauties of Bach remedies is that you don’t necessarily need to work with a professional to pick the right remedy. Since there are relatively few flower essences, it’s easy to match them to your particular emotions.

There are other forms of energy medicine besides homeopathy. Essential oils have played a huge role in my recovery from insomnia. Although aromatic extracts often aren’t always the first thing you think of when you hear the term “energy medicine,” some practitioners believe part of their healing potential is due to their high vibrational frequency. I don’t know if this has ever been scientifically studied. But I do use essential oils every night, and I no longer worry about not being able to sleep.

Essential oils have become very popular in the last decade. There are now a number of specific sleep blends available. You can also mix up your own sleep blends if you already have a collection of oils. If you don’t, there’s no need to buy multiple bottles if you buy a sleep mix. This Sleep Aid Synergy Blend contains ylang ylang, valerian, lavender and neroli essential oils. Valerian has been used for ages to facilitate rest, relaxation and tranquility.

I’m a big advocate of using different remedies, mixing them up, and never using the same thing too many times in a row. So I vary my herbs, essential oils and homeopathic remedies. When I started doing this, I began to see much better results. My first essential oil sleep remedy was lavender. It worked great, for about two weeks. Then, it mysteriously stopped being helpful. But after taking a break, it started working again. That’s why I like to share my story of how natural remedies work well for me if I switch them around.

There is one more form of energy medicine I want to tell you about. I’ve used this during periods of extreme stress and it really did seem to help. Best of all, it’s free and you can do it yourself. It’s often referred to as “tapping.” It involves just gently tapping certain meridians to release tension and negative memories. It sounds wacky and a little out there. But it worked for me. My stress level has hit the point where I no longer need to do this.

There are various instructional videos on how to tap. I ignored the affirmations that you’re supposed to say during the tapping process because they seemed too silly. Instead, I just pictured the negative emotion leaving my body.

These statements have not been approved by the FDA. These products are not intended to diagnose, treat, cure or prevent any disease. Women who are pregnant or nursing should not use essential oils or homeopathic remedies unless directed to do so by a healthcare professional.