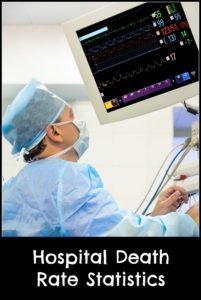 Hospitals are a leading cause of death.

Each year, in the United States alone, as many as 440,000 people die from hospital errors, which could and should be prevented, according to the advocacy group Hospital Safety Score.

I want my readers to stay informed. This blog is about staying healthy, with a focus on natural remedies. I started it after recovering from a potentially devastating nerve disease.

Once I realized what I was up against, I decided to seek alternative medical care. That’s because I was well aware conventional medicine has limits. Doctors are very good at diagnosing. But they may not have a solution.

Also, when they were young, both of my children were sickly. Their pediatrician couldn’t help. Nor could anyone we saw at a major children’s medical center. Instead, my children regained their health through the help of God. He put some amazing holistic healers in our path.

I need to make it clear that I’m not a medical professional. So this article is written for information purposes only. Please do not neglect getting medical attention because of anything you read here.

But let’s talk about these hospital errors, now the third leading cause of death.

My great-aunt went into a nursing home after she developed dementia. It was becoming increasingly difficult for her family to care for her. She hated this facility. One day, she made plans to escape. However, she eventually settled in and made a friend.

This was a dear, sweet lady named “Doris.” She took my relative under her wing. Doris was a little forgetful as well. But she was in better shape than my aunt.

Doris was childless, but she had a devoted niece. Her niece lived a few hours away, and visited often.

One day, I went to see my aunt. She was eating in the dining room. There was an empty spot where Doris usually sat.

Death Rate Due to Hospital Errors

“Where’s Doris?,” I asked one of the workers. “Oh, she died,” I was told. “She went to the hospital for a procedure.” From what I could gather, this was an elective procedure. Her sudden death also surprised the nursing home staff.

When I had last seen Doris, she was perfectly healthy. She wasn’t sick and she wasn’t bedridden. Aside from being elderly, there was nothing to indicate she’d be dead within a few days.

It appears as if she was the victim of something gone horribly wrong, which happens far more often than we’d like to believe. Hospitals, unfortunately, appear to be some of the most dangerous places on earth.

Going to a hospital in the United States is risky. That’s largely because of the high number of medical errors and medication mistakes, as well as the risk of contracting a serious infection. This is common knowledge among medical professionals.

In fact, in 1976, when physicians in Los Angeles went on strike, the death rate in that city fell by 18 percent. That’s because there were no more elective surgeries, and fewer drugs prescribed. Emergency rooms remained open. So anyone involved in a serious accident, or had an acute illness, was still treated.

Is it Dangerous Being in the Hospital?

Similar patterns were seen during doctor strikes in other parts of the world.

A new study, released in September of 2013 and published in the Journal of Patient Safety, underscored just how dicey it is for hospital patients.

The number of patient deaths each year could be as high as 400,000, far more than previously believed, according to the authors. The potential for “serious harm” is even higher, somewhere between 10 and 20 times that figure, they also concluded.

Right now, hospital mishaps are the third most common cause of deaths in the United States. Only heart disease and cancer take more lives.

How to Make Hospitals Safer

In Dr. Marty Makary, MD’s book, Unaccountable: What Hospitals Won’t Tell You and How Transparency Can Revolutionize Health Care, he discusses a very broken medical system with no standardization in how care is ordered, or delivered. The quality of care, as well as the culture, can vary widely from hospital to hospital.

Medical mistakes at one facility may be several times higher than at another equally prestigious facility within the same city, he notes. The workplace climate plays a role. A nurse at one center may feel free to question a medication order she doesn’t understand, while, at another hospital, it may blindly be dispensed.

What Doctors Don’t Tell You

Dr. Makary also exposes the reality that physicians face constant financial temptations to prescribe drugs and order procedures. Kickbacks from pharmaceutical firms and the makers of various medical devices are standard. The general public, he insists, has the right to know about this.

In his book, Dr. Makary gives us another frightening figure, which was published in the New England Journal of Medicine in 2010. Approximately 25 percent of patients are harmed, one way or another, during their hospital stay.

How to Make Your Hospital Stay Safer

The figures on hospital errors are sobering. This is why it’s so important to be as educated as possible, if you face a hospital stay. The handbook Better Safer Hospital Care tells you what to watch for and how to protect yourself.

This book is co-authored by a Pharm.D, which is very important, since medication errors are a big part of the problem.

How to Avoid Unnecessary Medical Tests

Many medical professionals believe that Americans are being over diagnosed, when they are basically healthy, and then over treated, for problems that are discovered by high-tech testing. There are complaints much of this is profit driven.

It’s also no secret that many tests are being ordered by doctors practicing “defensive medicine” due to concern over potential malpractice suits.

Dr. H. Gilbert Welch, MD, author of Overdiagnosed: Making People Sick in the Pursuit of Health, points out that this is the first time in history where so many people without symptoms, who feel entirely well, are being treated with pharmaceuticals. He calls this “the relentless pursuit of medicine.”

He notes that some diagnostic procedures, done in an effort to catch problems early, may do more harm than good.

Doctors in America are also well aware that people are taking too many drugs, both prescription and over-the-counter formulas. All drugs have side effects and some can be serious or even deadly.

About 1.5 million hospital stays are because of adverse drug reactions, which are the leading cause of death among people in the United States.

It’s estimated that 100,000 people die every year from taking prescription drugs, and the risk of serious side effects increases with the number of drugs you take. Hospital patients are typically on a multi-drug regimen.

Advice on How to Stay Healthy

Staying healthy is the best way to stay out of the hospital. Prevention is the best approach. According to various holistic health experts, avoiding degenerative illness may involve a radical overhaul of our lifestyle and our eating habits. We also need to get enough sleep and strive to reduce the amount of stress in our lives.

One of the best books I’ve ever read on how to stay healthy, and reducing or eliminating your need for prescription drugs, is written by a homeopath and naturopathic practitioner named Burke Lennihan. Her book is called Your Natural Medicine Cabinet.

Good Tips on How to Stay Healthy

The front of the book is filled with advice on how to eat properly and why organic food is our best choice. The remainder is broken down into chapters on various ailments and how to manage them without pharmaceuticals.

Her recommendations include specific homeopathic remedies, herbal preparations and various supplements. She points out that some inferior supplements are not used well by the body. So she includes recommendations from suppliers she knows and trusts.

Lennihan began her studies in healthcare by working in a health food store, where, she notes, she learned a lot from her customers.

This article is not intended as medical advice or recommendations. People with health concerns should discuss them with a physician.