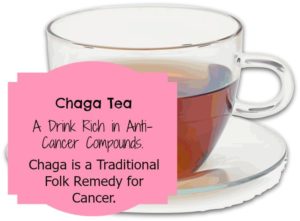 Chaga mushrooms are a traditional Russian folk remedy. They grow on birch trees found throughout the Northern Hemisphere. These parasitic mushrooms eventually kill the tree. But they’re packed with nutrients, minerals and antioxidants, which they steal from their host.

Chaga mushrooms have long been used in Russia and in parts of Eastern Europe for improving health and vitality.

Herbal remedies typically have wide-ranging actions. If a certain botanical medicine has the ability to potentially fight cancer cells, it also likely contains natural anti-inflammatory compounds. It may also help your digestion. In addition, it could improve your mood and help you get a good night’s sleep.

Medicinal herbs such as chaga are much different than drugs. They are natural substances that work with the body, supporting it and providing nutrients to help it work more efficiently.

Chaga could probably be considered a superfood because of its many reputed health benefits. Herbalists consider it to be a good immune system stimulant. Its also thought to be good when you’re fighting an infection, possibly because it contains natural antimicrobial compounds.

Some botanical medicine experts also classify chaga as an adaptogen. This means it’s a plant-based remedy that is believed to help the body better handle stress.

First, you need to acquire some dried chaga mushrooms. Although they grow throughout the cooler parts of the Northern Hemisphere, you’re probably not going to find them in your backyard. That’s because only a tiny fraction of birch trees have chaga infestation.

So you’re best best is or order some dried chaga online. In recent years, these mushrooms have become much more available outside of Russia.

The easiest way to make chaga tea is to acquire dried chunks, such as the ones sold by Maine Chaga Tea Chunks. You don’t have to mix anything, grind anything or strain anything. These chunks are harvested in their natural environment, and they are not farmed. 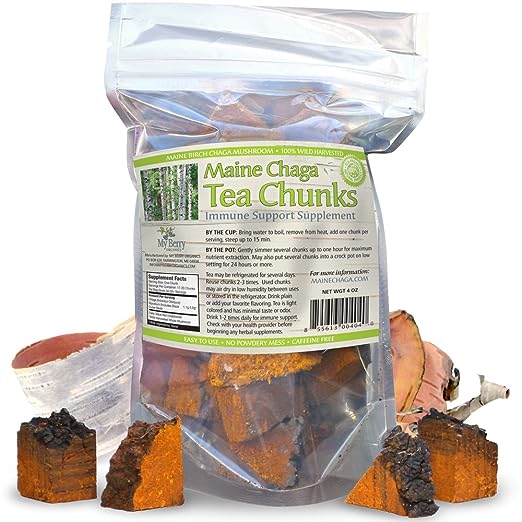 Then, all you need to do is boil water and pour it into a cup and add one chunk. The tea can then steep for 10 to 15 minutes before you drink it. If you want a stronger dose of chaga, you can boil a few of the chunks for a couple of hours. The chunks can also be reused.

Chaga has reportedly been used for centuries in Russia to treat cancer and other maladies. However, this fungus became much more famous throughout the world following the 1966 publication of Cancer Ward, a novel by Alexandr Solzhenitsyn. This lowly black mushroom is what cured the main character of his malignancy.

Western researchers are now studying this mushroom. One study that appeared in the World Journal of Gastroenterology in 2008 noted that “Chaga mushroom may provide a new therapeutic option, as a potential anticancer agent, in the treatment of hepatoma,” or liver cancer.

But please understand that I’m in no way implying that chaga mushroom should be used as a stand-alone cancer treatment right now. More research is needed. People with health conditions should discuss them with a doctor. Do not neglect getting medical care because of anything you read on this site.