How Long To See Results Of Anti Inflammatory Diet 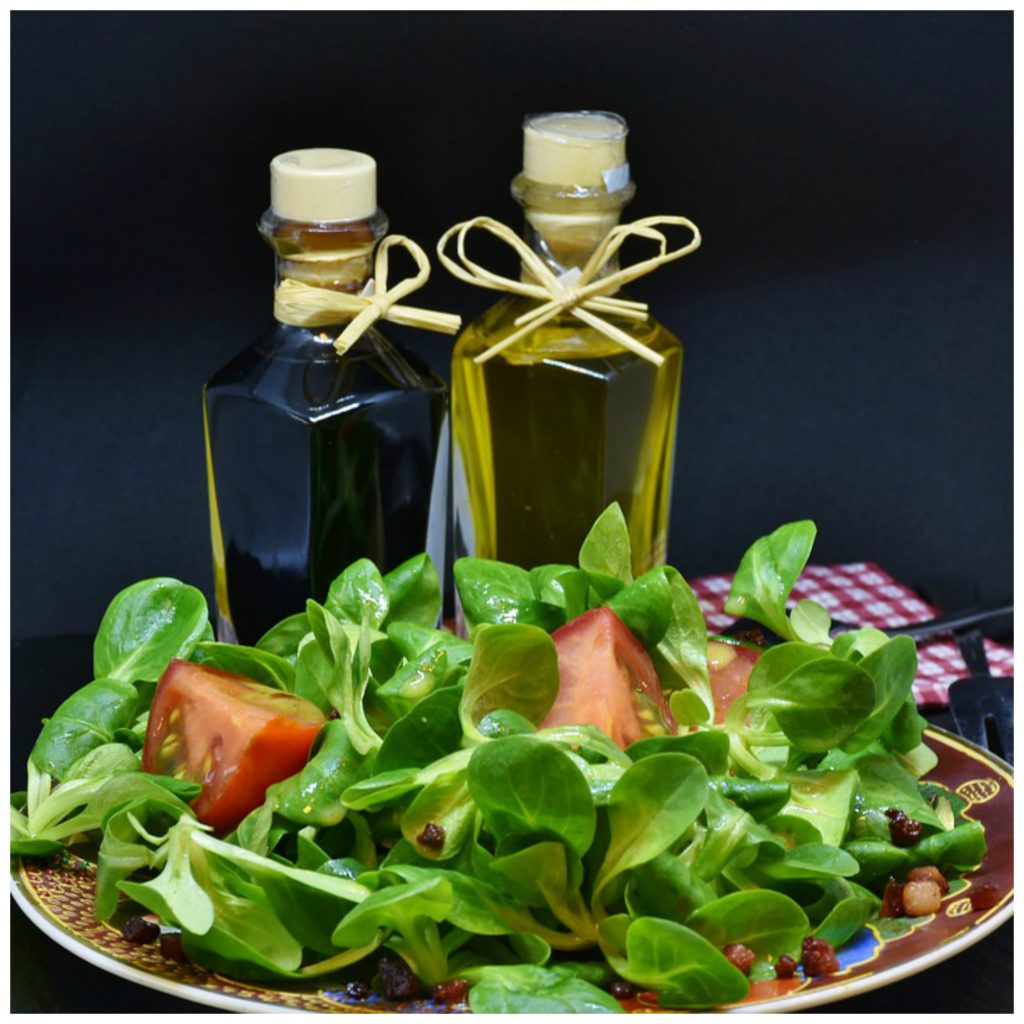 People with chronic illness are often told to go on an anti-inflammatory diet. That’s because inflammation fuels pain.

There’s growing awareness excess inflammation is lurking in a wide range of illnesses, including cancer, heart disease and even depression.

Some inflammation normal and healthy. The healthy inflammatory response kicks in if we injure ourselves. It’s also needed to fight colds and other infections.

How Long Did It Take You To Benefit From an Anti Inflammatory Diet?

However, it’s important to point out that diet changes are not a quick fix. They take time to implement. It takes time to see good results.

To keep it in perspective, it probably took years for chronic inflammation to develop. So it also takes time to reverse things. It would be impossible to give you an exact timeline on how long it takes to see results. Everyone is different. For me, getting well again was a lengthy process.

Benefits of An Anti Inflammatory Diet

Chronic inflammation may be triggered by stress. It’s also likely fueled by environmental toxins. Throw in a poor diet, and you have a recipe for disease.

So, if you see an alternative health expert, chances are, you’ll be told to change your diet. I know this is hard to hear. Actually, it took me years to finally gather the nerve to take that step. I dragged my feet. I did so despite the fact that I knew a lot about holistic medicine. I knew clean eating would probably make a huge difference. But I hated to give up my favorite foods.

However, I was really sick. So I had little choice. I had to say goodbye to sugar, milk, GMOs and junk food. The first few weeks were tough. But, eventually, I adjusted. Now I don’t even miss what I used to crave.

How Long To See Results of Anti Inflammatory Diet

I didn’t see overnight results. Instead, I noticed slow and gradual improvements. Prior to this, I did everything possible to avoid a dietary overhaul. I did give up gluten. I’d been gluten free for years. But I ate a lot of gluten-free junk food, filled with sugar and genetically modified ingredients.

What Foods are Anti Inflammatory?

Learning to eat well was something I resisted fiercely. If I could go back and change anything, it would have been my diet. Instead, I suffered for years with chronic pain. All because I was unwilling to take that first step.

Once I finally cleaned up my diet (got rid of milk, sugar, junk and GMO’s) it probably took a couple of years until I noticed I was living pretty much pain free. But, meanwhile, there were gradual improvements. I also took various herbal remedies that contain natural anti-inflammatory agents.

I need to stress that I’m not a doctor. I can’t give medical advice or tell anyone what to eat. All I can do is share my personal story of upgrading my diet, in hopes my chronic pain would go away.

Now, I don’t look back. I  feel so much better. My life, for the most part, has returned to normal. I still have a little pain. But, oftentimes, not even enough to notice. Breakthrough pain is easily fixed with a special essential oil blend designed to cool inflammation. I’m so happy I found this blend, which almost always results in instant relief.

You can see it below. This is not a a multilevel marketing product. So you save on paying those layers of commissions that fund the various “uplines” and “downlines.” This formula is very strong. So you only need a little. One bottle should last a long time, since it needs to be diluted with a carrier oil. I also used Plant Therapy Rapid Relief, which I liked as well. But my body clearly needs something more cooling. 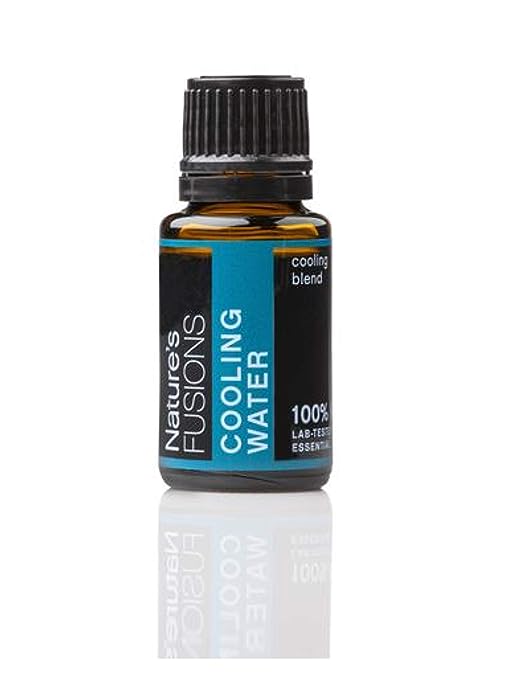 My story of healing is what’s known as “anecdotal evidence.” It’s a nice story. But it comes without scientific proof.

A skeptic would say I have no proof that eating differently caused me to feel better. Maybe this healing happened all on its own. Or maybe one of the herbal or homeopathic remedies helped.

Or maybe it was the placebo effect. I got better simply because I believed I would.

But guess what? We know have some scientific evidence that diet can play a role in reducing inflammation. The so-called Mediterranean Diet has been shown to lead to reduced inflammation, compared with the Standard American Diet, or the average European diet.

Actually, though, I think it’s probably difficult to run a good study on diet and inflammation. That’s because there are so many variables. And cheating will tarnish the results. 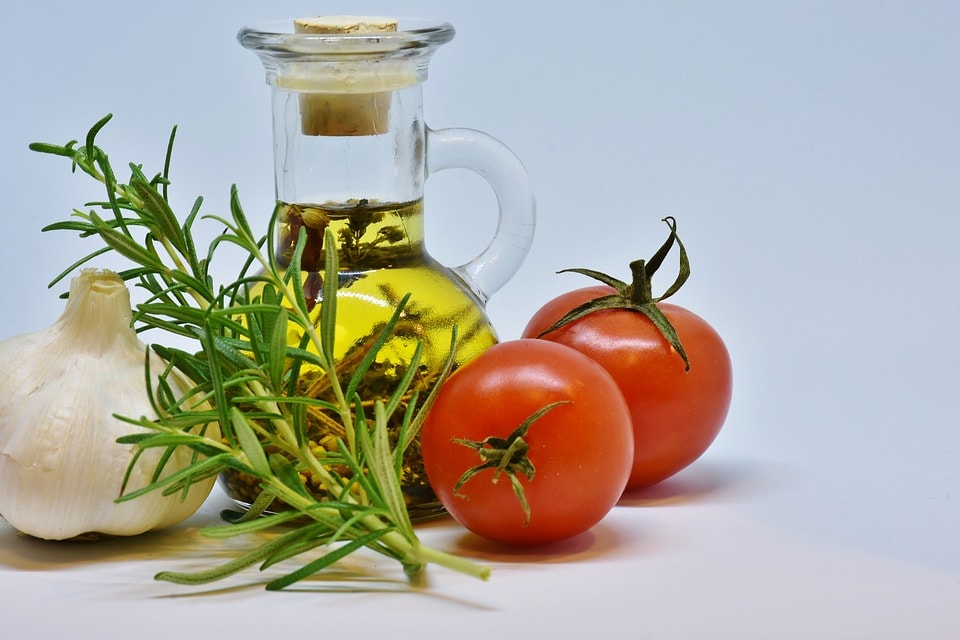 Review of An Anti Inflammatory Diet

Let me say a word about cheating. I think it’s a bad thing to do while your body is healing. Maybe some people would disagree with me. But I didn’t cheat much for at least 18 months. By cheating, I don’t mean enjoying a hot fudge Sundae. Instead, I mean going to a restaurant and ordering a gluten-free meal, minus the dessert.

Gluten and sugar seemed to make my pain worse. I avoided these triggers for years. However, apparently, I also needed to give up dairy. Once I did, my intense pain began to subside. Slowly, I realized my symptoms were receding. Here’s an earlier post on the link between dairy foods and chronic inflammation.

For a long time, I didn’t eat restaurant food. If my family dined out, I brought my own organic meal. Now I can eat in a restaurant with no ill effects. Back then, I didn’t want to chance it. Because I’d likely pay for this meal later, with increased nerve pain.

Also, at first, I tried to eat foods that were low in arachidonic acid. These included eggs and fatty meats. If you want to learn more about why this essential fatty acid is related to inflammation, you can read all about it in a book called Inflammation Nation.

What Foods Reduce Inflammation in The Body?

It’s difficult to tell people exactly what to eat. So I won’t even try. That’s because we’re all different. Some people will thrive on certain types of foods. Others do well with a lot of meat-based protein. Others may feel better with little or no meat.

Some people report their symptoms disappear by going Paleo. I tried that. And I felt like a truck just hit me. So, instead, of a specific diet, all I can say is eat real food (organic if possible), and find out what specific diet makes you feel better.

It’s also a really good idea to work with a professional. Maybe your own doctor can help. Chiropractors also tend to know a lot about good nutrition.

Some people keep food journals. They record what they eat and how they feel afterward. This is probably a really good idea. I’m just not organized enough to do this. If you don’t already own a food journal, you can find them online.

In general, green leafy vegetables help reduce inflammation. But some people can’t tolerate eating a lot of greens. They may actually feel worse if they overload on vegetables. So find out what works for you. Holistic healers often recommend giving up dairy, gluten and refined sugar. 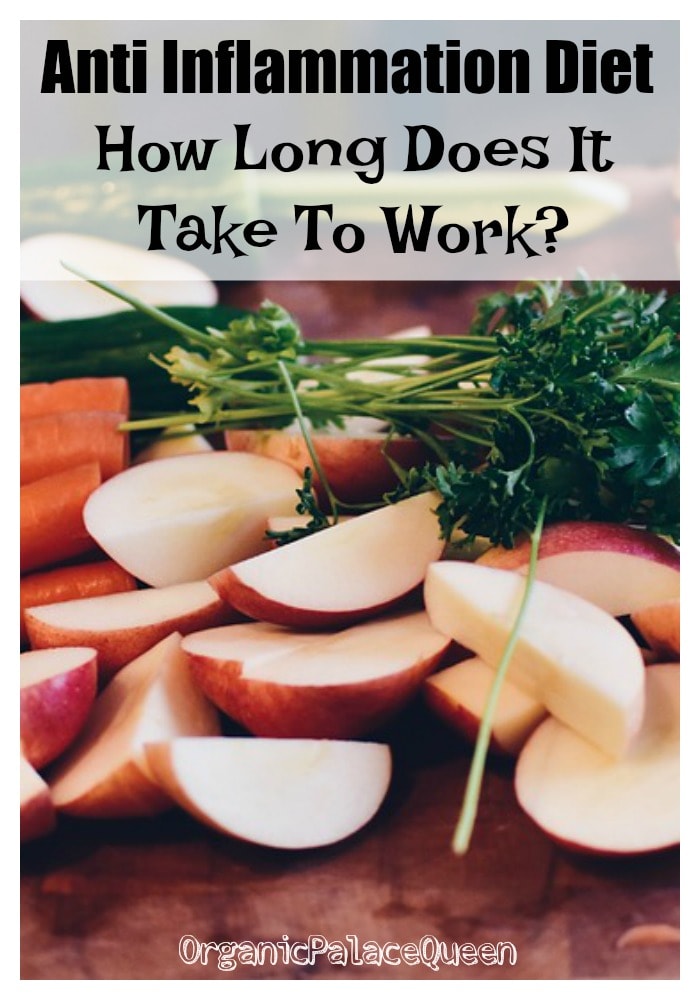 Need help getting started on a real foods diet? I had a friend hold my hand, as I learned to cook from scratch again. However, if you don’t have a friend to help, Real Plans is probably the next best thing. This is a budget-priced healthy meal planning service that comes with 24 hour support.

Real Food meals also allow you to avoid genetically modified ingredients. GMOs are now found in most processed foods. It’s much better to prepare meals with fresh, wholesome ingredients. For some people, it’s a whole new way of cooking. But the benefits far outweigh this slight inconvenience. My own health improved so much once I started putting healthy foods into my body. I was no longer drop-dead tired, and barely able to make it through the day.

One of the easiest ways to implement an anti-inflammatory diet is to cut out the junk. Get rid of sugar, as well as artificial sweeteners. Raw organic honey is an excellent alternative. You can even use this to bake.

I’m not a food extremist. I realize it would be very difficult to never have another sweet, yummy snack again. Instead, I recommend alternatives, along with a real food diet. Trust me, once you start eating real food you’ll probably never want to go back to eating junk again.

Since I know firsthand how much better I feel eating real food, I urge all of my readers to do the same. Need help getting started? I recommend signing up for Real Plans, just for a month.

Real Plans gives you a month’s worth of delicious real food recipes, as well as a weekly shopping list. This will cut down on waste. (I spent so money trying to figure out what to buy.) Also if you get stuck, Real Plans comes with telephone and chat support. For more information click on the image below.

Leave a Comment
Previous Natural Home Remedies For Liver Detox
Next What Happens If You Stop Drinking Milk?