How to Afford Organic Food On A Budget 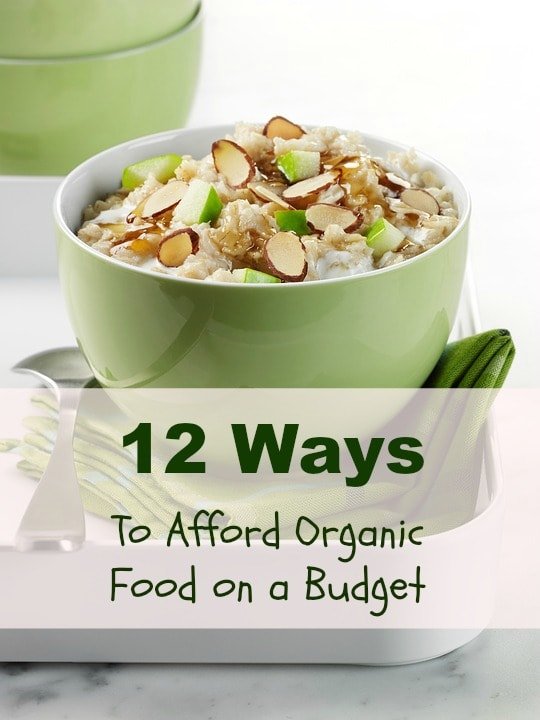 I’ll gladly pay more for pesticide-free produce and hormone-free meat. For me, organic food is worth the extra cost.

It’s also more nutritious, according the Journal of Applied Nutrition, which published a 1993 study showing a sampling of organic produce had significantly higher mineral levels than conventionally grown food.

I’ve been shopping organic for several years. When I first upgraded our meals, I bought nearly everything I needed at a local grocery store.

Shopping For Organic Food at Vitacost

It was the most expensive market in the area. But I liked the one-stop shopping. I paid dearly for this convenience.

So, now, I shop for a  lot of my speciality foods online. I buy them at Vitacost, a huge online health food store.

How to Afford All Organic Food

Pretty soon, though, I couldn’t afford to keep spending $350 to $400 a week on food. So. I had to make some changes. I found ways to cut our grocery bill in half. This was something I desperately needed to do, so we could pay our other bills.

Since then, our financial situation has improved. So I don’t have to be as careful. But I still remember when I had to do so drastic budgeting, in order to be able to keep buying healthier foods. I was able to pare my grocery budget down to $150 to $200, and nearly everything was organic.

This budget was from a few years ago. Before I discovered Aldi. This is where I get my produce and meat. These can’t be ordered online at Vitacost.

How Can I Afford Organic Food?

One thing I’ve discovered along the way has made life infinitely easier. This is shopping at Vitacost. I no longer have to run around to several different places, trying to find the best price. I don’t need to hunt for those elusive organic food coupons. Vitacost has some of the best prices I’ve found anywhere on organic food. It also offers regular discounts and coupon codes. (I’m able to get free shipping too.) If you’re trying to save money on organic groceries, do yourself a favor and check out the prices at Vitacost.

I am absolutely convinced that everyone needs to eat real food, as their budget will allow. I want to tell you how an average family like us was able to afford it.

Actually, you really can’t afford not to avoid GMOs. Our grocery stores are filled with genetically modified foods. Nearly all of the corn and soy grown in the United States has been genetically engineered. This allows it to survive applications of a controversial herbicide made by Monsanto. The active ingredient is glyphosate. I don’t know about you, but I don’t want to serve this to my family.

In the United States, we don’t hear much about the potential dangers of GMOs. But French researchers found that laboratory rats developed enormous mammary tumors after consuming genetically modified grains.

It took months to learn better shopping habits. Even though I now have more money to spend, I carefully plan every meal in order not to waste food. And if something’s on sale, I stock up.

Even while eating the “typical American diet,” I still spent too much on groceries. I didn’t plan ahead. Sometimes, too tired to cook, I’d resort to take-out. Sometimes produce rotted in the vegetable bin. I was literally throwing away hundreds, if not thousands, of dollars a year. Now, all food gets eaten.

Eating organic, on the cheap, does take work. But not nearly as much as it used to. I once spent too much time shopping at different grocery store. Now, I place my order at Vitacost and wait for it to be delivered. 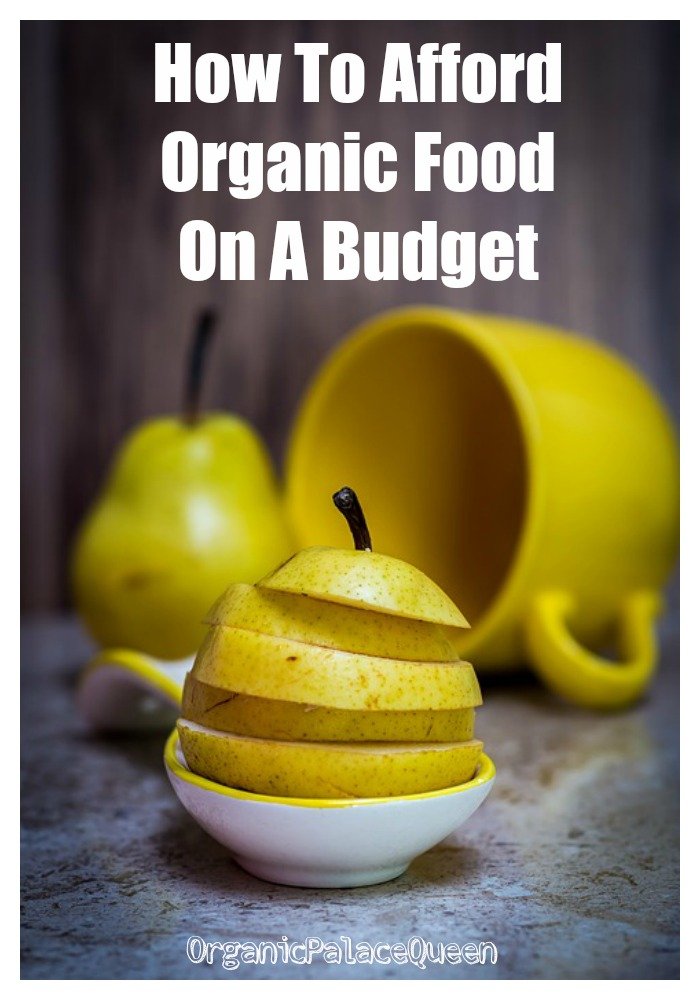 We’re now eating better than ever. And feeling better too. My husband’s chronic heartburn has greatly improved. My long-standing nerve pain is pretty much cured, and my energy level has increased. (Homeopathy and various supplements have also helped.)

No one in my house is hungry. When we first made the switch, my son was a teenager. So he complained about having “nothing” (no junk food) to eat. Now, though, when he’s home, I try to make sure he has organic corn tortilla chips. (Otherwise, he’d undoubtedly be eating corn chips derived from genetically modified crops.)

Here are the Late July tortilla brand chips I buy. If you factor in the Vitacost discounts (along with free shipping), they are less expensive when I order them online.

Our diet, I’ll admit, is not 100 percent organic. That’s partly because some products aren’t always available in my area. Sometimes, organic potatoes are not to be found.

For the most part, our meat, rice and produce is free of chemicals and pesticides. Avoiding genetically modified foods in a big priority as well. This is nearly impossible if you eat a conventional diet, as even salad dressings and mayonnaise are loaded with GMOs.

I feel very blessed we’re able to eat organic food. Here are 12 ways you can afford to do the same.

How to Save Money When Buying Organic Food

Update: The follow money-saving tips were written a few years ago. They are still valid and hopefully useful to you. However, since then, I’ve decided to radically simplify my life. I now do much of my non-perishable shopping at Aldi. This is a no-frills discount store that carries a growing selection of real food and organic food. I’m so happy there’s an Aldi within a reasonable drive from my house. I still get many non-perishables online.

If you’re serious about lowering your grocery bill, one area to look at is how much food you’re throwing away. This could potentially add up to hundreds or thousands of dollars a year. One easy way to eliminate spoiled food in your fridge is to use a low-cost meal planning service, so you buy only what you need to use that week, and then use this food to make all of your meals. This is also a healthier approach, since you are assured of putting a delicious meal on your table every night, made with real food. Also, this should reduce the temptation to resort to restaurant take-out because you have nothing for dinner.

Real Plans is a budget meal planning app that already does all the legwork, in terms of planning. Each week you receive a healthy grocery list you can take on your weekly shopping trip. (Once a week shopping is all you need with Real Plans.) This program is designed to save time and money for busy families. Click on the picture below for details.

Where to Find Organic Food Coupons

Why Genetically Modified Food is Bad

6 Comments
Previous Is There a Way to Prevent Cancer?
Next What I’ve Learned About Malignant Narcisissm