How To Forgive Someone and Let Go Of Anger 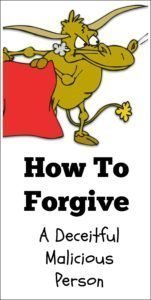 It’s really important that we forgive people who’ve hurt us. Regardless of the level of deception involved, we need to let it go. Otherwise, the anger will destroy us. It will rob us of our mental health. It can also make us sick.

On this site, I write a lot about natural remedies. But all of these wonderful healing tools may not work as well, if you hang on to anger.

Sensing a need, a result of my experience with a deceitful person, I decided to write How to Forgive a Malicious Person, a step-by-step guide to forgiving the unforgivable.

What Does Anger Do To Your Body

Though the ages, holistic healers have been telling us that unresolved anger is really bad for the body, as well as the mind. In the early 1900’s, Dr. Edward Bach, MD devoted his career to studying the physical effects of emotions. He was convinced that negativity causes diseases.

In Medieval times, Saint Hildegard of Bingen was a renowned healer. She developed a sophisticated form of medicine. She also believed that anger was potentially deadly.

Modern researchers also recognize the harmful effects of anger. There’s no dispute this mental state can hurt your health. The mainstream venue WebMD notes that people who are angry have a higher rate of heart disease, compared to folks who are more peaceful.

How To Forgive Someone and Let Go of Anger

But how do we get past the sense of injustice? How do we just let it go, when we discover that someone actually went out of their way to harm us?

Right now, we seem to be living in an age of narcissism. This and other forms of antisocial personality disorders appear to be at an all-time high, according to some researchers. A hallmark of this condition is an inability to own up to mistakes. So, someone with strong narcissistic traits won’t admit they’re wrong. Or, they might for a minute or two. Then, they’ll turn it around and point their finger at you.

Someone who refuses to apologize makes it more difficult to forgive. But it’s still possible to get beyond this hurdle. I know, because I had to do it myself. I had to forgive the unforgivable. This was not an easy task. But it was necessary.

How To Forgive Someone and Move On

At one time, I had a close “friend.” I trusted her. I assumed she had my best interests at heart. So I shared with her some of my struggles.

Mysteriously, though, during this time, my life had become extremely chaotic. I had no idea why. I continued to tell her about these puzzling incidents.

Finally, years later, my eyes were opened. My friend, I realized, wasn’t on my side. This revelation was excruciating.

There was also the matter of cleaning up the mess. This involved removing myself from a particular social setting, as well as a place of worship. (I met this woman at church.) It meant cutting ties with her. But, even worse, I needed to reduce contact with other people I cared about. That was the only way I could extricate myself from a highly toxic situation.

How To Forgive Friends Who Have Hurt You

I’ll spare you most of the details. But, suffice to say, this experience also caused my husband and children a great deal of distress. This happened during my children’s religious formation. What they saw hurt their faith. So, how in the world can I forgive someone who hurt my children?

Actually, I have no choice. I’m Catholic, and Jesus tells us to forgive our enemies. So I can’t call myself Christian until I do this.

Also, on a more practical level, remaining angry is bad for you. It can turn you into a bitter, hateful person. As we know, it can harm your health.

What I had to do wasn’t easy. But I literally forced myself to forgive someone who deceived me. After doing this, peace flooded into my life. What happened now has no power over me. I can move on with my life. I’ve also written a book in hopes of helping others do the same – forgive the unforgivable.

How To Forgive a Malicious Person

How To Forgive Emotional Abuse

My personal opinion is that malignant narcissism and other forms of antisocial personality disorders is at an all time high. This unfortunate trend is now being documented by various researchers. Anyway, it seems as if I’ve not the only one who’s encountered destructive and malicious people.

People who display aberrant and deceitful behavior, which doesn’t conform to the rules of society, are highly frustrating to deal with, to say the least. They’ll also continue this abuse, unless we make it impossible (or at least a lot more difficult) for them to hurt us again. Oftentimes, this means going “no contact” if they’re not related to us, or we don’t work with them.

I do need to stress that I’m not a mental health expert. My non-professional advice for dealing with difficult people springs from first-hand experience. But I’d love to share some tips on forgiving malicious people. (You’ll find more detailed information in my book.)

There are also natural remedies with a history of use for forgiveness, although I can’t make any claims about any particular formula. But I can share information about what’s available.

For instance, Bach flower remedies have a history of being used for anger and forgiveness. These were developed by Dr. Edward Bach, MD, whom I mentioned above. A famous homeopath and medical doctor, he practiced in Britain, during the early half of the 20th century. He was absolutely convinced that negative emotions can make us sick.

Consequently, he developed a line of homeopathic flower essences, designed to target specific emotions. The Bach Centre, which promotes his work, tells us that vervain flower essence might be helpful for someone struggling with feelings of anger, coupled with a sense of injustice.

Another useful remedy for anger, mentioned by the Bach Centre, is  willow flower essence. This may be indicated for a person who feels as if they can never get past beyond what has happened.

I love Bach flower remedies and I’ve also used them myself.

For me, forgiveness would be much more difficult if I didn’t have God in my life. That’s because I know He’s watching the situation and His justice is perfect.

Everything written here is my personal opinion only and is not meant to be interpreted as medical advice.

Anger and Your Health

Leave a Comment
Previous Easy Healthy Meal Plan For a Week
Next Will 5 HTP Help Me Sleep?