How To Wash Produce With Baking Soda

Did you know that baking soda may be the best way to remove potentially toxic pesticides from fruits and vegetables?

Unfortunately, our produce is loaded with pesticides.

Some fruits and vegetables contain a lot of chemical residue.

(In fact, the Environmental Working Group publishes an annual list called The Dirty Dozen. These are the fruits and vegetables that contain the most chemical residue.)

That’s why I try to buy organic fruits and vegetables whenever possible.

However, it’s not always possible.

There’s not a wide selection of organic produce where I live.

So the reality is most of us end up eating at least some conventionally grown produce.

Pesticide residue is a reality.

But baking soda to the rescue.

How To Wash Produce With Baking Soda

Please understand that I’m not saying that baking soda alone will totally take care of all pesticides, and you’ll be left with chemical-free produce.

Instead, think about lowering your exposure.

New research indicates that baking soda may be the best way to do this.

(Also, don’t forget about the Dirty Dozen list. You can choose fruits and vegetables proven to have the least amount of pesticide residue.)

One 2017 study that ran in the Journal of Agricultural and Food Chemistry found that baking soda neutralized certain pesticides better than bleach.

(This is really good news. Unlike bleach baking soda is not toxic. So you don’t have to use a toxin to remove other toxins.)

Researchers found that soaking apples in baking soda for 12 minutes was highly effective in removing thiabendazole, a commonly used fungicide.

If you try this at home, this would mean soaking produce in a baking soda and water solution. Then rinsing this solution off well before eating.

The study in question only looked at one type of apples.

But I feel confident enough with the results to soak other types of produce in a water/baking soda solution too.

I do try to buy organic produce. I can use this mixture on organic fruits and vegetables too.

Once I too was under the impression that organic food wasn’t sprayed with any type of pesticide. Now I know better.

Plant-based pesticides are thought to be safer. But I still like to wash them with baking soda, just in case.

I know organically farmed food is expensive. But I’ve found ways to afford it, by shopping carefully. You can read about my shopping tips here.

I heard about this study shortly after it was published.

But I wish I had read it.

Ever since I heard baking soda was good for pesticide removal I started using it on produce.

I always keep a box of baking soda by the kitchen sink.

However, I now realize I wasn’t soaking my produce nearly long enough. A few minutes is good. But 12 to 15 minutes, apparently, is even better.

So I’ll adapt and adjust accordingly.

Soak for 15 minutes and rinse well before eating. Proportions can be adjusted. For instance, I used 6 cups of water in the photo above. For the sake of the picture the apples are not submerged. But before anyone eats these I will soak the other side.

One of the researchers in the Journal of Agricultural and Food Chemistry study was interviewed in another publication.

Dr. Lili He, PhD., of the University of Massachusetts Amherst was quoted as saying the study cited used a solution of two cups of water to one teaspoon of baking soda.

I think I might need to use more baking soda than I had been using.

Baking Soda Plus Water Best For Washing Pesticides Off Apples 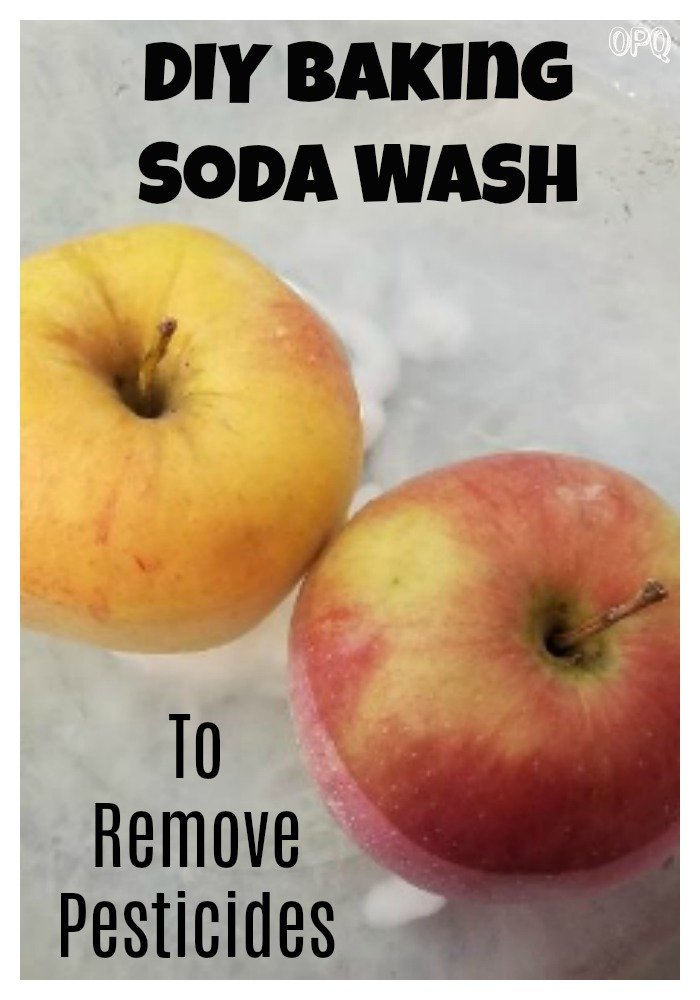 Leave a Comment
Previous Is There A Way To Prevent Hair Loss?
Next Fake Himalayan Salt Lamp Warning