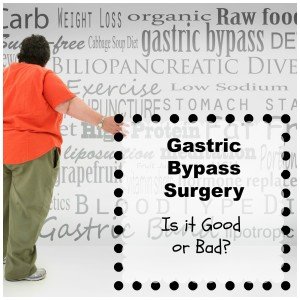 One of my relatives lives far away. I don’t see her often. She’s always been heavy, but not morbidly obese.

So I was very surprised to hear she’s considering gastric bypass surgery, a major operation that carries potential risks.

For one, there’s a frighteningly high likelihood of death. As many as 0.5 percent of patients die, as a direct result of this procedure. However, this is an improvement. Years ago, the fatality rate was double what it is now.

Complications are also common. These affect about 10 percent of the people who undergo this elective procedure, according to the online health source WebMD.

So, why is this surgery being offered to my relative?

In recent years, the group of eligible candidates has broadened. Rerouting someone’s digestive tract is no longer viewed as a last-ditch effort, reserved for people so heavy they can barely walk, or even leave their house. Carrying around hundreds of pounds of excess baggage puts such a strain on the heart, and other organs, that gastric bypass can be a life-saving option.

Instead, gastric surgery is now being marketed to a thinner population, which still needs to lose some weight, but, for whatever reason, can’t do it through diet and exercise.

Recently, even though I fall into the normal weight category, or at least close enough, I received a glossy brochure in my mailbox, extolling the virtues of this surgery. It featured color photographs of smiling, middle-aged people who’ve had the procedure, and now, presumably, can look forward to long, happy lives with a much slimmer waistline.

The accompanying literature said they were now “healthy.” They certainly looked better. They did report some immediate benefits, such as increased energy levels and a reduction in joint pain, which could be expected after shedding 100 or so pounds.

These patients also noted their appetites decreased. They were now eating less, and they no longer seemed to crave the calorie-laden foods they once enjoyed.

However, if you’re considering this type of surgery, it’s a huge decision. The glossy brochures may not tell the full story. If it were me, I’d want to read a lot about this procedure, including unbiased books and articles written by people who’ve had this surgery, such as Determined to Live: How I Endured 48 Surgeries Due to Gastric Bypass, a personal account of the complications following weight loss surgery.

However, the brochure presented the surgery in a positive light only. No one will argue that obesity is very unhealthy. It can cut your life short, a fact insurance actuaries are well aware of. However, the potential downfalls of this procedure were not even mentioned.

For instance, there are immediate risks associated with general anesthesia, as well as other potential surgical complications, such as infection, intestinal perforation, internal bleeding and pulmonary embolism to name a few. There are longer-term problems that can develop as well.

Prospective patients were also not told that the risk of adverse events is intimately tied to the skill level of the operating physician. It’s highly recommended that you choose a surgeon with a long track record of success. (Please understand I’m not a healthcare professional.  So this article is designed for information and discussion purposes only, and should not be used as medical advice. I’m writing this from the perspective of someone who believes our current medical system is too profit driven.)

Nor was information offered on the long-term outcome. This can include something called “food dumping,” in which what you’ve eaten rapidly passes through the body undigested. Nor was it made clear that one’s stomach can stretch again, calling into question whether the surgery was worth it in the first place.

However, the brochure did touch upon the issue that reductions in appetite may be short lived. Within a year, more self-control may be required. It’s well known that gastric bypass can “fail” if a patient eats smaller portions of very calorie-dense meals.

I believe it’s important for prospective patients to get both sides of the issue. This may include reading accounts of people who are happy with their decision, or who believe the benefits for them exceeded the risks.

The first gastric bypass procedures were done in the 1960’s. They were performed on extremely heavy patients. News reports described it in sensational terms, and it was considered a slightly bizarre way to lose weight. Now, though, it’s gone mainstream.

Currently, surgeons use one of several types of bypass procedures. Some appear to be more effective than others in achieving the desired result. Today, about 160,000 people a year have one of these procedures, a number that appears to be limited only by the unwillingness of some insurers to pick up the tab.

Once the surgery is done, overeating will result in an uncomfortable sensation of fullness. If the small intestine is rerouted, it also prevents all of the consumed calories from being absorbed.

Not surprisingly, these patients no longer get all the nutrients they need from their new diet. So, lifelong supplementation is required. They also need to stay in close contact with their medical team, in case long-term complications arise. One possibility is leakage, in which the acidic digestive juices damage surrounding organs.

Sometimes, additional surgery is needed to repair anything that might have come undone, or was damaged during the initial round.

Here is another personal account written by someone who has had a vertical sleeve gastrectomy.

Where are the heaviest people found? About 70 percent of those living on the small, South Pacific country of Nauru are obese. Even more astonishing, about 95 percent of the population is overweight, according to figures from the World Health Organization.

Obesity is a major health threat. Many extremely heavy individuals have diabetes, which, in turn, can lead to heart damage and kidney failure. They are also at greater risk for heart disease and stroke, as well as certain types of cancer.

The definition of obesity is having a body mass index, or BMI, of more than 30kg/m. Someone whose BMI is 40 or more is considered morbidly obese. This measurement is derived by calculating a person’s weight, divided by the square root of their height.

Given the risks that obesity presents, it’s certainly understandable that, sometimes, extreme measures are considered, and may even be a reasonable choice, if someone truly is dangerously overweight.

However, no one really knows the long-term effects of subjecting multitudes people to this surgery. Even with supplementation, patients will not benefit from the many micro-nutrients contained in real food. Sometimes people who’ve had weight reduction surgery develop thinning hair, skin changes and other signs that they aren’t receiving adequate nourishment.

There are different procedures, some involving removal of large parts of the stomach. Clearly, this is a huge step, in which slick marketing probably shouldn’t play a role.

One disturbing trend is beginning to show up in medical journals. In August of 2007, the New England Journal of Medicine published an article showing that gastric bypass patients had a dramatically higher suicide rate than the general population.

This article is intended as background and discussion only and is not meant to be read as medical advice. People with health concerns should discuss them with a licensed professional. The author assumes no responsibility for treatment decisions or outcome.

Leave a Comment
Previous Alternative Medicine vs Modern Medicine
Next Are There Some Ways to Prevent Breast Cancer?