Is There a Way to Prevent Cancer? 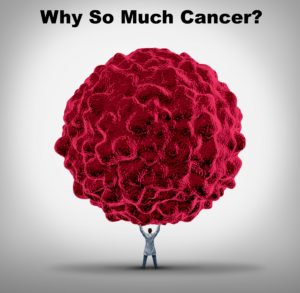 Cancer used to be relatively rare. Many senior citizens can still remember when it was so uncommon that it was discussed in hushed tones, as if it were something to be ashamed of.

Nowadays, though, cancer is everywhere, or at least it seems to be. Nearly all of us have been affected, either personally or because someone we love has battled the disease.

The National Cancer Institute estimates that this year, in the United States alone, about 1,685,210 will be diagnosed and another 595,690 will have their lives cut short by cancer, which is now the second-leading cause of death.

Furthermore, the numbers of patients are expected to increase, so that by the year 2030, we can expect the incidence to nearly double, according to the ACS. By then, we are on track for 21.4 million new cases of cancer per year, throughout the world, as well as 13.2 million annual deaths.

So, in the midst of this raging epidemic, is there any good news to be found? Keep reading. I hope this article will open your mind about this modern illness. Cancer seems to be fueled largely by lifestyle, according to many holistic healthcare experts. This means that we can be proactive with prevention.

In fact, one scientist has even written a book called Never Fear Cancer Again. He assures his readers that a healthy lifestyle is highly protective.

Why Do Some Get Cancer and Others Don’t?

We’ve been conditioned to think that cancer is something that strikes randomly. It hits because we’re very unlucky or because we’ve inherited a bad set of genes. However, if you think about it, the genetic angle doesn’t make sense, considering that cancer now strikes more than 1 in 3 Americans. If it were all in the genes, we wouldn’t be seeing such a rapid increase.

Vast sums of money are being thrown at research. There’s a lot of interest in exploring “cancer genes” that have existed in the population since the beginning of time. Why, now, are these “faulty” genes suddenly being switched on? Like most modern research, this is aimed at possibly developing expensive screening tests, which might yield some information about susceptibility. But, typically, the focus is not on preventing cancer, or finding a safe, non-toxic solutions if it does develop.

Can Unhealthy Lifestyle Cause Cancer?

Please understand I’m not a medical health professional. So everything you read here is presented for discussion only. Please discuss any health concerns with your doctor, and never put off or neglect getting treatment because of anything you read here. I’m simply discussing my own personal approach to how I view cancer. (Unfortunately, I have very strong feelings about this disease, which has recently claimed a number of people I know.)

Alternative and integrative medical specialists believe that cancer is largely a result of our modern lifestyle. We are eating the wrong foods. We are also are taking a vast array of prescription drugs, many of which have malignancy listed as a potential side effect. We don’t get enough exercise and we don’t spend enough time outdoors, in natural sunlight.

Our food supply in the United States has been altered so drastically that we are consuming genetically modified organisms in most of our processed food and restaurant meals. These are some of the factors that weren’t present in previous generations. French researchers published a study showing that rats fed genetically modified grain developed huge mammary tumors.

One of the reasons we’re so afraid of cancer is because conventional treatments are so horrific. If we’re diagnosed, we’ll probably have surgery, which can be disfiguring. This is typically followed by chemotherapy and radiation. We are all very familiar with what happens next. Patients typically lose their hair and may become greatly debilitated.

Sometimes, they go into “remission.” However, the cancer often returns because the root causes haven’t been addressed, according to one researcher named Raymond Francis, M.Sc, who authored the book, Never Fear Cancer Again. He contends that cancer is caused by two factors, nutritional deficiency and toxicity. Lifestyle changes have the potential to reverse cancer, he explains.

One physician named Dr. Emanuel Revici, MD showed that cancer can be reversed. In some patients, whom suffered from bone malignancies, he restored their health by balancing their metabolisms. Once a person’s pH level was corrected, and maintained in the normal range, the disease would eventually disappear, according to a book written on the life of this brilliant researcher.

His findings were confirmed by before and after x-rays of the bones. Once his patients started getting better, their diseased bone would be replaced by healthy bone.

Unfortunately, Dr. Revici’s work has largely been lost to history, and it probably would be, if it weren’t for the efforts of Kelley Eidem, who authored Dr. Revici’s biography.

Practicing in New York City, Dr. Revici ran afoul of the cancer establishment because his ideas were so revolutionary. He was subject to a vicious, and successful, campaign designed to end his career.

This happened despite the fact he had a good track record of reversing many cases of “terminal” cancer.

I highly recommend this fascinating book to anyone with an even passing interest of potential non-toxic treatments for cancer. I read it cover to cover, and I now view the disease in a different light.

Kelley Eidem is an author who interviewed Dr. Revici and wrote his autobiography, entitled, The Doctor Who Cures Cancer. Years after publishing his book, Eidem developed cancer. It was an aggressive malignancy that had spread throughout his body. Most people would have been terrified.

However, Eidem didn’t panic. Instead, he incorporated some of Dr. Revici’s healing methods, along with eating a lot of habanero peppers and garlic. Within two weeks, his visible skin lesions had disappeared and Eidem has remained healthy for 16 years, despite having what doctors would have classified as Stage IV cancer, according to an online account published by Eidem.

Bill Henderson is another strong voice in the war on cancer. In 1994, Henderson lost his wife to cancer, after a valiant struggle with ovarian cancer in which she tried everything mainstream medicine had to offer. She spent four years submitting to surgery, chemotherapy and radiation, and the last two years of her life were excruciating, according to online accounts of her struggle.

After his wife died, Henderson learned there is a much different way to approach the disease. He claims to have helped direct a number of other “terminal” patients on the road to recovery, through a non-toxic nutritional approach, coupled with an ample supply of various dietary supplements.

Henderson has become a leading advocate for developing an alternative system of treating cancer that doesn’t involve chemotherapy or radiation. He believes that most malignancies spring from poor dental health, previous root canals, as well as from eating a poor diet and undergoing trauma and low-level stress that takes places over a period of time.

After the death of his wife, Henderson spent years researching various alternative treatments, many of which were once used with good success.

In 2004, he published the first edition of his book, Cancer Free, co-authored by Dr. Carlos Garcia, MD. The beginning of the book contains stories of survivors who are now living, as the title suggests, cancer-free lives. One testimony your can read in the beginning of the book is from a woman named Robin, who wrote to him in 2010, because she’s now in perfect health. Earlier, her doctors told her she’d never recover from her Stage IV breast cancer.

On his website, Henderson advocates finding the cause of cancer, instead of just treating the symptoms. He claims that removing the cause should make it relatively easy to reverse the condition, and he said good results are often seen after just six to eight weeks of following a strict diet and taking the recommended supplements. He says many people, all over the world, have regained their health with his approach. Many of them, he notes, had previously been told by their doctors their condition was “terminal.”

This information is for discussion purposes only. People with health concerns should discuss them with a physician. The author of this article is not responsible for treatment decisions or outcomes.