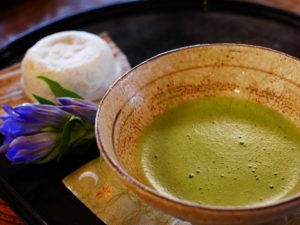 That’s because matcha tea powder is packed with antioxidants, in a much more concentrated form, compared to regular green tea. It’s also a good source of chlorophyll, sometimes referred to as “plant blood.” This powdered tea is also said to enhance the mood, possibly through the action of an amino acid called L-theanine. Because it’s considered to be an energizing drink, some people substitute matcha for their morning cup of coffee.

How to Use Matcha Powder

A good case in point are the matcha cupcakes, which you can see in the picture above. My daughter made these for Mother’s Day. They were exquisite. The matcha added a depth that otherwise wouldn’t be found in regular gluten-free cupcakes. (I avoid wheat due to chronic nerve inflammation.)

Does Matcha Tea Have Radiation?

However, despite the many known benefits of matcha, there are concerns that Japanese varieties may not be as safe as they once were, in the wake of the Fukushima disaster.

I don’t know how if these worries are warranted or not. But I’ve decided that any matcha I’m going to purchase going forward will come from another country. In 2015, the website EcoWatch published an article that noted that radiation (Cesium 137) was detected in a sample of powdered Japanese tea. Quoting an original article that ran in the New York Times, EcoWatch reported that traces of Cesium 137 was present in a batch of tea that was shipped to Hong Kong.

The article pointed out that the levels detected were low. But, still, the fact that it was even found at all is alarming.

At my house, I have no way to test for radiation. So I can’t test every tea sample I purchase. That’s why I’ve decided that future matcha purchases will be non Japanese.

It appears as if the overwhelming majority of matcha tea on the market comes from Japan. But I was able to find one organic brand of matcha, MatchaDNA, which is grown in China. This is organic tea is harvested by hand in the Fuijan province mountains. Matcha DNA tea powder is also tested for the presence of lead and other heavy metals. It’s also packaged in a BPA-free pouch.

Is Matcha A Superfood?

I’m so happy there are alternatives, so we can enjoy our matcha without the fear of potential radiation contamination. This very powder has so many nutrients that it’s often called a “superfood.” This means it’s a plant that’s considered a nutritional powerhouse.

A single cup of matcha tea, according to one matcha authority site, is the nutritional equivalent of 10 cups of regular green tea. Matcha contains high quantities of a potent antioxidant known as epigallocatechin gallate or EGCG, which is believed to be helpful for burning fat. This is one reason why matcha is often touted as a natural weight loss supplement. However, it’s also clear that much more investigation is needed before anyone can claim matcha can help you shed pounds.

But there is one thing we do know about matcha and weight loss. This powdered tea is nearly calorie free. It adds a rich creamy texture to smoothies and baked goods. So it offers a creamy, satisfying low calorie addition to a healthy diet, coupled with a level of exercise that’s appropriate for you. (My matcha/pistachio cupcakes were soft, with a butter texture, despite the fact no dairy was used in the recipe.)

In the lab, EGCG has been shown to kill cancer cells. Some research also indicates that this substance is good for the brain and nervous system. In a clinical trial, EGCG was shown to improve muscle function in patients with multiple sclerosis. This study was published in the American Journal of Clinical Nutrition.

2 Comments
Previous Does Bee Pollen Make You More Fertile?
Next Priests and Nuns Who Healed the Sick