Can nettle leaf help your kidneys?

There’s very limited research. One paper showed that stinging nettle seed extract did help two people with severe kidney disease. This isn’t the same thing as a clinical trial. The seed is also different than the leaf of this plant. But, as far as scientific research is concerned, it’s all we have to go on right now. Toward the end of this article, I’ve included more information about these findings.

We do know that stinging nettle, overall, is used for a number of different problems.

His face was swollen. His eyes were nearly shut. It was clear this little guy was feeling miserable. His mother gave him some nettle. Then she took pictures as this medicinal herb did its job. Within an hour, he looked perfectly normal.

After seeing these photos, I knew I had to try this natural medicinal. Even though my seasonal allergies are very mild, I wanted some. So I bought some stinging nettle tea, because I realized this plant contains strong anti-inflammatory compounds.

I have a painful and potentially crippling nerve disease. It’s triggered by excess inflammation. At one point, I couldn’t walk. But I’m not in a wheelchair, even though that’s where I was headed. Instead, I’ve recovered and life is back to normal. I give all the credit to God, and the abundant natural remedies He’s given us.

However, I’m not cured. I use herbal remedies, homeopathy and essential oils to control my symptoms. If I stopped taking natural supplements and got careless about my diet, my disease would probably flare up again.

So I bought some stinging nettle tea to add to my natural medicine cabinet. I like to have an assortment of herbal remedies on hand. That’s because they seem to work better if you rotate them.

So, can stinging nettle help support your kidneys? Herbal remedies tend to benefit the entire body, instead of just isolated parts. So can it do anything for your kidney function?

If you have kidney disease, I need to stress that you need to work with your doctor, before taking stinging nettle or any other herbal supplement. This is important, as nettle can interfere with certain medications, commonly taken by kidney patients.

Please understand that I’m not a medical professional and I’m not making any claims that stinging nettle can improve your kidney function. I’m just sharing information on what I know about this herbal remedy, which I use as a natural anti-inflammatory, since I have chronic nerve inflammation.

However, you’re looking for a general health tonic, here’s what we know about nettle. This plant grows abundantly in Europe, North America and in parts of North Africa. It has a long history of use, by various cultures throughout the world. According to the Lahey Clinic website, the juice from this plant were used by Hippocrates, to alleviate bug bites and stings.  Right now, it’s used in Europe as a mainstream treatment for prostate enlargement.

The Lahey site also notes this plant is very nutritious, and noted that “Because nettle leaf has a long history of of food use, it is believed to be safe.”

At the moment, some people believe nettle can help improve kidney function. But research is lacking. (I like to cite scientific studies when applicable, even though this site is devoted to alternative healing.) However, a few herbalists are exploring nettle’s action on the kidneys.

In 2003, a paper was published in the Journal of the American Herbalists Guild. It described dramatic results in the reduction of blood creatinine levels for two patients with kidney disease. This protein is a marker for loss of kidney function. Elevated levels show the kidneys are stressed.

It’s also important to note that these practitioners used nettle seed extract, rather than the tea, as shown below. However, I’m showing the tea because I’m writing this article from the perspective of simply using stinging nettle as something healthful. Nettle tea is very tasty, especially if it’s sweetened with a little bit of organic honey. 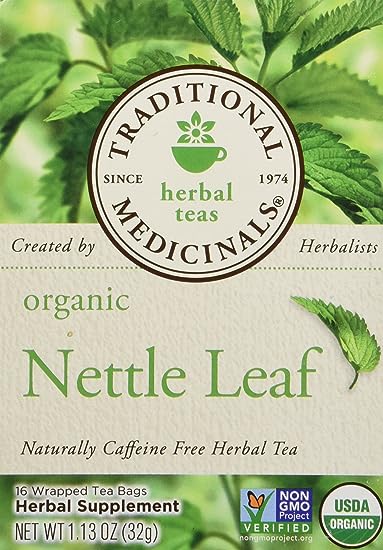 I’m not a healthcare professional, so all of the above statements are my personal opinion, and are presented for discussion purposes only.