There’s a new twist to drinking the world’s most popular beverage. One of the latest trends in tea is to use blooming tea, which slowly expands as you watch it brew. It’s carefully made to grow into the shape of a beautiful flower, when it’s covered with boiling water.

The best way to watch your tea “blossom,” of course, is by using a clear glass tea pot, such as the one that comes with the Numi Flowering Tea Set shown here. Tea ball sets make lovely presents. On this page you’ll find only organic selections, so they should suit someone who’s health conscious.

This Numi gift set includes six tea balls. So it will make a total of 18 pots of tea. Each ball is different, as it includes a variety of teas, such as oolong, white, green and black, each infused with various flowers and flavors.

The teas are organic, so you can drink them yourself, or give them as a present, confident that they are not laced with pesticides. 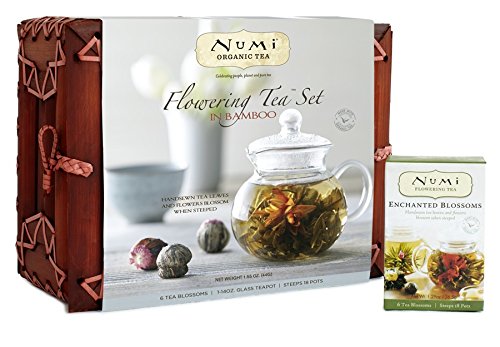 We drink a lot of tea in my house. But I only buy organic varieties. This is something I am very careful to do, especially after reading a recent report released by Greenpeace International. This alarming study found unacceptable levels of pesticides in 95 percent of Indian teas. These were sampled at different times, in various cities throughout the country.

The majority of these teas contained 10 or more types of bug-killing chemicals. One of the samples was found to have a total of 20 different kinds of pesticides. Greenpeace researchers even found traces of DDT in some of the leaves.

The report also pointed out that these teas were then packaged and sold under some of the most popular labels in both the United States and Europe. Until we’re assured that corrective action is taken, the safest bet is to only buy organic tea.

These organic flowering white tea balls are sold by Mahamosa Gourmet Teas, Spices & Herbs, an American company based in Georgia. White tea, which comes from the same plant as black tea, is very lightly processed. It’s considered a delicacy, because it has to be hand picked, at just the right time, while the leaves are still young. The tea shown here is sold in a two-ounce quantity. It does not come with the square dish you see in the picture. 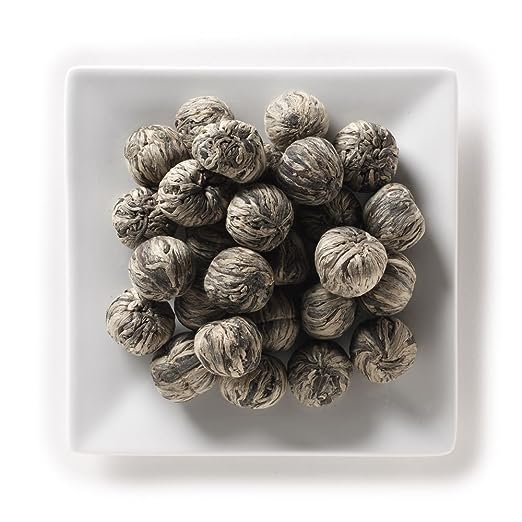