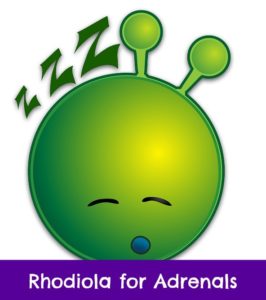 Many of us have pressures previous generations didn’t face.

We struggle to survive financially. The institutions we once relied upon no longer exist. There’s a general uneasiness, a feeling of not knowing what to expect next. Chaos and confusion are everywhere.

Our bodies are under attack as well. The soil has been depleted of nutrients. Fruits and vegetables are sprayed with pesticides. Our food supply has been contaminated with genetically modified ingredients. Our air is polluted and sodium fluoride is added to our water supply.

All of this can take a toll on our adrenal glands.

Holistic health experts, on the other hand, are quick to pick up on it. They have protocols and supplements, designed to restore your health. One herb that’s often recommended for adrenal fatigue is Rhodiola rosea.

It’s believed this plant has the ability to balance the metabolism. For instance, people with adrenal fatigue often have trouble sleeping. One reason could be elevated cortisol levels.  This hormone interferes with serotonin, which regulates the sleep cycle.

How to Tell if You Have Adrenal Fatigue

Someone who’s tired and sluggish, and barely makes it through the day, could be suffering from this all-too-common condition.

When your adrenal glands don’t work well, the rest of your endocrine and immune systems also function poorly.

Unfortunately, many of us live in a pressure cooker. Oftentimes, this is caused by situations that aren’t easy to change.

I’ve been diagnosed with adrenal exhaustion twice, by two separate practitioners. Both prescribed natural remedies to help these glands heal.

If you stick visit mainstream doctors, chances are you’ll never know if you have overworked adrenals. Allopathic physicians, in general, only spot adrenal failure, a life-threatening condition.

In fact, many regular doctors aren’t even sure adrenal exhaustion is real. If they’re not aware of it, and don’t believe it exists, it’s practically a certainty they won’t pick up on it.

So, if you’re wondering if you have sluggish adrenals, your best bet is to find a holistic physician. Chiropractors who do muscle testing are very good at diagnosing this. (This is how I found out what was wrong with me.)

Please understand that I’m not a doctor, so I can give medical advice. What I’m doing here is simply sharing the story of my own experience with adrenal fatigue.

There’s no use being diagnosed if there’s no hope of improvement. But here’s the good news. Herbs can help your adrenals, according to various natural health experts. For best results, these medicines should be paired with lifestyle changes, designed to reduce stress.

Rhodiola rosea is considered one of the best remedies for adrenal fatigue. This herb grows in Siberia and in other cold regions in the Northern Hemisphere. It’s considered an adaptogen. This means it’s been observed to have properties that help our bodies better handle stress.

During my recovery, I switched up my supplements. That’s because they seem to work well initially. Then they stop working. According to my healthcare provider, means I need to take a break. (I can always return to them at a later date.)  So, someone with adrenal fatigue may want to add rhodiola to the mix, just for variety.

Studies have shown Rhodiola functions as a natural antidepressant. It can also curb chronic inflammation. (With adrenal fatigue, you may also be fighting an inflammatory condition.)

The rhodiola shown here is sold by Now Foods and it’s a brand I trust. This is a very powerful herb with wide-ranging effects on the body. Since it’s believed to have the ability to improve your mood, the Russians call this Siberian remedy “the depression herb,” according to Earth Clinic, an online natural health site.

I seem to have recovered from adrenal exhaustion, at least to the point where I have a lot more energy, and my circulation has improved. I also sleep better. One of the worst aspects of this condition was oppressive fatigue, coupled with not being able to get a good night’s sleep.

Of course, I’m probably more likely than the average person to slide back into poor health. That’s why I need to keep a close watch on my stress level, and eat well.

I no longer take a specific adrenal supplement, since I’m feeling a lot better. But I do take various adaptogens. These herbal remedies work as health tonics. I’ll probably need to take them for the rest of my life. But that’s okay. I’m feeling pretty good again.

Although I often write about natural remedies that aren’t well studied, there’s a body of research on rhodiola. So far, it looks as if this herb can help with depression and excess inflammation.

I’m not a healthcare professional, so all of the above statements are my personal opinion, and are presented for discussion purposes only.

How Long Does it Take to Heal Adrenal Fatigue?