How Can You Tell If Your Olive Oil Is Fake?

Olive oil has many potential health benefits. It can lower your blood pressure. It can possibly reduce the risk of heart disease. There’s also evidence this Mediterranean staple protects against cancer. 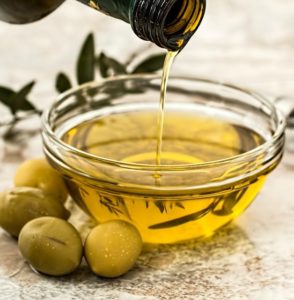 Olive oil may also bring relief to people with rheumatoid arthritis, due to its anti-inflammatory properties.

No one disputes the fact that olive oil is good for you. But there’s a catch. It has to be the real deal.

Unfortunately, fake olive oil has flooded the market. This is a global problem, as people throughout the world have developed a taste for olive oil. Police in Spain and Italy, where most olive oil is produced, regularly bust olive oil crime rings.

Since I’m well aware of the problem of fraud, I buy my olive oil from a trusted California source.

Update: Since this article was originally published California Olive Ranch has announced that it now gets some of its olive oil from “hand selected farms” located in other parts of the world. I’m going to continue buying this brand because I believe it will be sourced carefully.

Another apparent update to the site leads me to believe that the company is working with “like minded partners” to source some of its olives.

Unfortunately, according to a study from the University of California Davis, 73 percent of the five “top selling” imported olive oil brands, labeled “extra virgin,” didn’t meet the sensory standards set by the International Olive Oil Council. California and Australian brands, however, passed these tests.

Extra virgin olive oil is expensive to produce. Olives must be picked at just the right time. This is when they’re in the process of turning from green to black. Hand picking is preferred. This prevents leaf and stem fragments from getting into the mix. Pickers can also spot olives that shouldn’t be used.

However, with so much oil being produced, there’s huge potential for corruption. The Times regularly reports on busts involving fake olive oil

How to Avoid Fake Olive Oil

But it’s almost impossible for the average person to tell, definitively, if an olive oil is fake. So it’s really important to get your olive oil from a trusted source.

Sometimes real olive oil is cut with a different oil, according to various published reports that document this problem of food fraud. These fillers may include low-grade soybean oil or canola oil, both of which could be genetically modified. Hucksters trying to pass off fake olive oil may resort to deodorizers to mask the smell of what’s being added.

Also, just because a label says “Made in Italy” doesn’t mean it really is. False advertising is also rife in the industry. (This has been very well documented.) The facilities used to make phony oil may fly below the radar of local health authorities. Conditions may be unsanitary or even dangerous. Some busted operations have been found in garages and fuel plants.

Apparently, chemical analysis doesn’t always pick up on fraud. It’s very expensive and time consuming to test for all components of an individual brand. In order to be certified extra virgin, an oil must undergo taste tests by a panel of experts. A good oil will have a sufficient peppery taste, and not have disagreeable odors. This is why the UC Davis findings were so revealing.

How Can You Tell If Your Olive Oil is Fake?

Consumers should know that real extra virgin olive oil is a bitter, with a slight peppery undertone. It should also taste a little like olives.

The olive oil crime network is extensive and well established. It has a history dating back to antiquity, according to various other published accounts.

Arrests in recent years, in Spain and in Italy, have been noteworthy. In 2008, one Italian sting, known as “Operation Golden Oil,” brought down 85 farms, and resulted in over 20 arrests. It’s believed, though, many more people were involved.

In another incident, investigators discovered a ship docked in an Italian port. It was carrying doctored hazelnut oil from Turkey. The intention was to pass it off as Greek olive oil

Spanish police have also had their hands full. In 2012 they broke up a network consisting of industry professionals that mislabeled cheap oil as extra virgin.

Where to Buy Pure Olive Oil

We already know that some of the major olive oil brands, which we see on supermarket shelves, may not pass internationally established standards. Even if the manufacturer is honest, there’s no guarantee all of the suppliers are above board.

That’s why many consumers are turning to small, local farms run by people they trust. These farms produce and bottle their own oil. If you’re buying olive oil for its health benefits, it makes sense to shop as local as possible. If you live in California, a major olive growing region, it should be easy to find a product made in your state.

There are presently at least 32,000 acres of olive trees in California. The industry appears to be growing quickly in response consumer demand.

People who live elsewhere may want to order online from a California-based company or conduct their own sight and taste tests. If your “extra virgin olive oil” is thin and watery, consider it suspect. Look for a full-flavored robust oil.

Price is important. Since real extra virgin is costly, you should be highly suspicious of bargain basement brands.

Where to Buy Good Olive Oil

The USDA Organic label on a bottle of olive oil may offer an additional layer of protection. Here is the brand of olive oil we use in our house.