Cancer Step Outside the Box 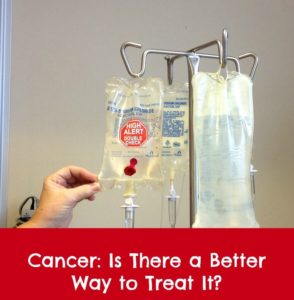 is a masterpiece, written by natural health crusader Ty Bollinger. This book is now in its sixth edition, with more than 150,000 copies sold.

It’s hard to deny the fact that we’re in the midst of an epidemic. This year, in the United States along, more than 585,000 people will die from cancer.

In recent years, I’ve lost a number of friends and relatives. One of the most tragic was the death of my first cousin, a young mother who left behind four children. She was diagnosed with breast cancer.

Within a year she was dead, after undergoing radiation and chemotherapy. It was a hellish year too. She lost her hair and her hope. Even as her cancer advanced into her bones, doctors continued giving her strong drugs and blasting her with radiation.

They told her she was going to die. Yet they strongly discouraged her from trying anything else.

Is there a better way to treat this disease?

He wrote this book after losing both of his parents, as well as a number of other relatives. They all died from cancer. His family members also underwent conventional treatments, which did not restore their health.

Consequently, Bollinger threw himself into researching various natural treats, which are widely considered effective, at least in alternative medical circles. The results of his research are found in Cancer Step Outside the Box.

Readers of Bollinger’s book will learn about treatments they probably had no idea existed. In the United States, oncologists can only legally recommend FDA-approved treatments. These include surgery, chemotherapy and radiation.

Bollinger’s groundbreaking work points out that hope may exist, even for patients whose condition has been classified as “terminal.”

Cancer Step Outside the Box Book

Bollinger’s book, first published in 2006, also includes information on preventing cancer. Many of the same lifestyle recommendations given for those with the disease also apply if you’re trying to avoid getting sick. (Holistic health experts, in general, believe cancer is highly preventable.)

This large paperback book, which contains 534 pages, is filled with priceless information on keeping yourself and your loved ones free of a disease that now strikes approximately one out of every three Americans.

I have immense respect for this man, who has brought much good out of a personal tragedy, which claimed the lives of his loved ones.

These statements have not been approved by the FDA. These products are not intended to diagnose, treat, cure or prevent any disease. This article is not intended as medical advice, and is presented for discussion only. People with health concerns should discuss them with a doctor. The author assumes no responsibility for treatment decisions or outcomes.

Very Open Letter from an Oncologist