What Do You Use Shea Butter For? 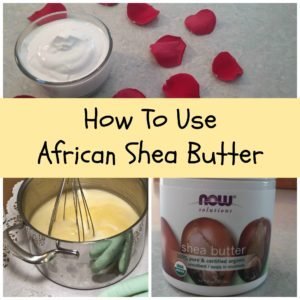 Shea butter comes from the nut of the shea tree. It grows in dry regions of West Africa. For centuries, women who’ve lived in these arid conditions have used this natural emollient to protect their skin against extreme conditions. It is also said that the Egyptian Queen named Nefertiti used pure shea butter to preserve her beauty, for which she was legendary.

Other women use shea butter on their hair. If you’ve never owned shea butter, it is absolutely luxurious. If your skin is dry, it seems to literally drink this oil. Pure organic shea butter is one of the most common ingredients that you’ll find in DIY cosmetics and beauty care products.

Lately, because I’ve gotten rid of my chemical-based cosmetics, I’ve developed an interest in making my own beauty products. As I mentioned earlier, shea butter is a must have. You can also use shea butter alone, without mixing it. It’s firm in texture, so you have to use a little at a time and work it into your skin.

It’s this firmness that makes it so useful for DIY beauty creams and lotions. Shea butter is often mixed with coconut oil, which tends to melt easily, unless it’s mixed with something else.

Later in this article, I’ll share with you a super easy body butter recipe with shea butter. You need just two ingredients, along with an optional essential oil.

I often use a homemade night cream made with shea butter around my eyes. Shea butter has been shown to contain anti-aging and anti-inflammatory compounds, according to a 2014 study published in the American Journal of Life Sciences.

What Do You Use Shea Butter For?

Shea butter has definitely left Africa. It’s now treasured by people throughout the world for its reputed ability to help heal even stubborn skin conditions, such as eczema and psoriasis. It seems as if a growing number of people, myself included, are making their own cosmetics, and putting shea butter in them. That’s because we don’t want to slather potentially dangerous chemicals on our skin.

She butters is also used to heal stretch marks from pregnancy or weight loss.

A few months ago, I decided to make my own night cream with shea butter. I’ve stopped using chemicals on my face, and I’m so happy I did this. Plant-based products seem to work better. My skin now has a healthy natural glow.

Anyway, here is the brand of shea butter I purchased. It is sold by Now Foods, one of the largest and most respected supplement companies in the world. I totally trust this family-run company to provide high-quality health products.

Here is the really easy recipe I used to make shea butter. All I did was used 2 parts of organic coconut oil to 1 part of pure shea butter. Then I took these two ingredients and very gently heated them on the stove. I watched closely, and removed the pan from the heat as soon as the oils became liquid. Next, I transferred these oils to the freezer for just 10 minutes. When I moved them, I could see the oils were beginning to harden a bit, and turn white around the edges.

Then, I put the oils in a bowl and whipped them with an egg beater for about 12 minutes. This totally reminded me of whipping egg whites to make a meringue. After I stopped aerating the oils, they continued to harden.

The picture below is one of my first batches of shea butter body butter, made with just three ingredients. In addition to the shea butter and coconut oil, I added a little bit of Aura Cacia palmarosa oil. This is an aromatic that’s often used for skin problems, such as dryness and eczema. The addition of palmarosa oil also makes the body butter smell like roses. 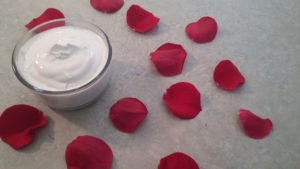 Shea butter is often used to heal stretch marks left behind by pregnancy or weight loss. It’s a typical ingredient found in both commercial and DIY stretch mark creams. We do know that this natural substance is good for the skin, and has also been shown to increase collagen production in laboratory animals, according to the study I cited above. This nut oil is also said to be good for healing scars.

Shea butter is often used to condition dried or over-processed hair. There are also anecdotal reports of this nut oil being used to treat hair loss loss. It is generally applied to the hair and left in for about 30 minutes before shampooing. Anyway, here is a video demonstration of how one women uses shea butter as a natural alopecia treatment.

How to Make Body Butter With Shea Butter

Leave a Comment
Previous Lavender Essential Oil For Feet
Next What Home Remedies Can Help Me Sleep?