Using A Clay Cooker Instead Of An Instant Pot 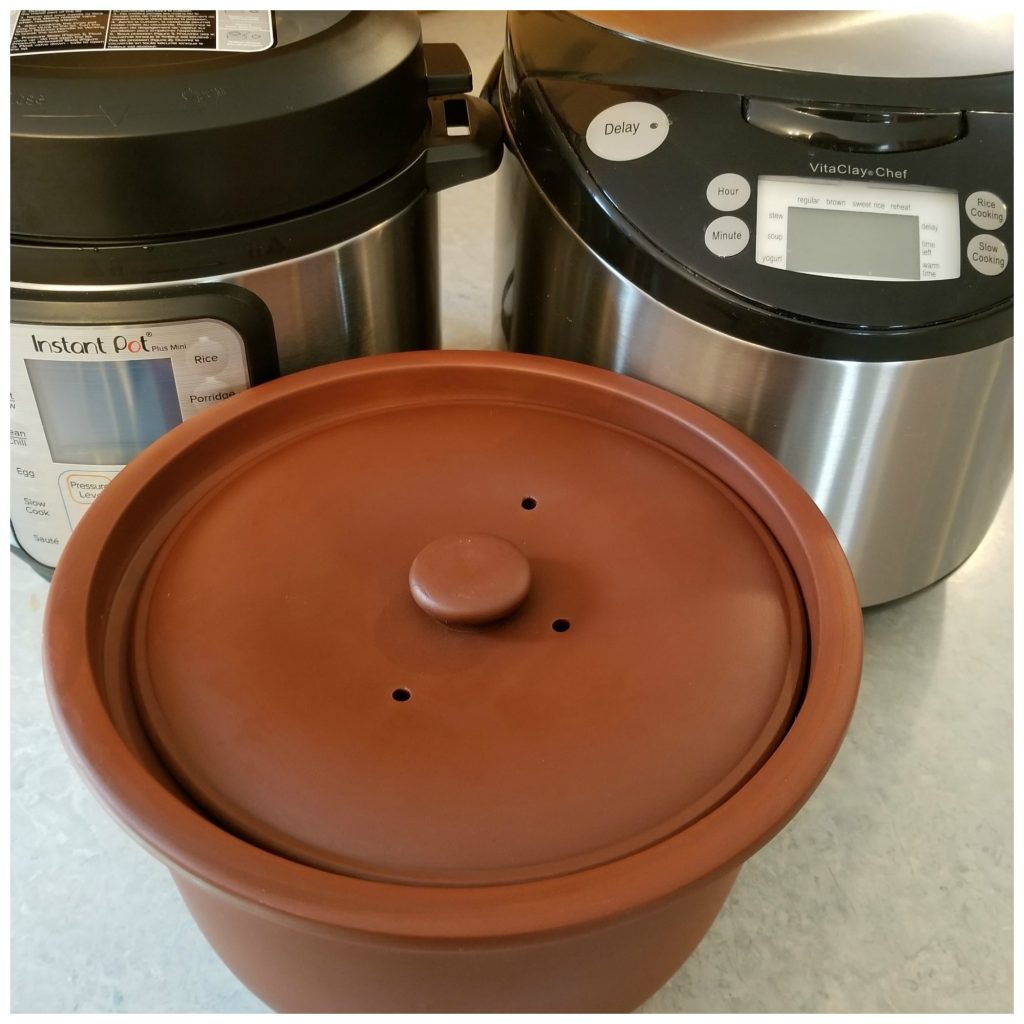 I’ve long been baffled by the Instant Pot craze. And I’ve never understood all the fuss over this little kitchen appliance that everyone just has to have.

Because I have an appliance I like better. A lot better. This is my totally nontoxic slow cooker with a clay base.

I’ve used this slow cooker for years. I love to make savory soups in the winter. In the summer it allows cooking without heating the entire kitchen.

The clay pot is made from a special type of clay prized in Asia. Spaghetti sauce tastes better when cooked in clay, I do believe.

So do a lot of other foods. This is the pot I also use to make chicken soup. I put it on and forget it.

After two hours, the meat is really tender. My clay pot cooker does a better job than simmering for hours on the stove.

Using A Clay Cooker Instead Of An Instant Pot

So until recently I missed the Instant Pot craze altogether. It sailed right past me.

I ignored the bazillions of Instant Pot recipes on the web. I ignored all the blog posts extolling the virtues of the Instant Pot.

Also, I never ever planned to own an Instant Pot because I was so happy with my VitaClay slow cooker that I really didn’t see the need for another gadget.

I even wrote about my decision not to get an Instant Pot in an earlier blog post.

But everything has changed.

It’s not my Instant Pot. But right now it’s on our kitchen counter, right alongside by Vita Clay slow cooker.

The clay cooker, hands down.

My VitaClay cooker serves the same basic function as an Instant Pot. But I believe with a lot less fuss.

But we do own an Instant Pot. There are advantages and disadvantages, which I’ll explain throughout this post.

Does Silicone Leach When Heated?

I also believe the clay cooker is the better choice. As I pointed out in my earlier article, the Instant Pot has an interior ring that seals the pressure pot. It’s made from silicone.

I’m not entirely comfortable with heated silicone near food. Although no one has proven this isn’t safe, I’m not one to wait for definitive studies.

Concerns have been raised. I’ve decided to heed them, until further notice. Even though I can’t find a study that proves that heated silicone leaches into our food. (I don’t use silicone bake ware or cooking utensils.)

I hope silicone is safe for cooking. Because the Instant Pot craze has caught fire. A lot of people now own these pots. Us included.

Integrative health expert Dr. Andrew Weil, MD has weighed in on the debate.

“So far, no safety problems have been reported, but if you’re concerned, stick to silicone kitchen tools (such as spatulas) and avoid bake ware,” he writes on his site.

Dr. Weil also noted that silicone is an “inert material” that shouldn’t leach.

(I see no fillers in the silicone sealer ring that comes with the Instant Pot.)

So I probably shouldn’t obsess about the silicone ring. The inside of the Instant Pot is stainless steel. I believe this is a much better choice than most of the other ceramic slow cookers on the market.

For me, though, my VitaClay cooker is a great alternative to the Instant Pot.

If I could just have one appliance, it would be my clay cooker.

But there is an Instant Pot in the house. What is it good for? How best to use it?

Given that I own two pot-style cookers, I now feel free to review the Instant Pot.

Is it really all it’s cracked up to be. What are its advantages? Are there any drawbacks?

Is An Instant Pot Worth Buying?

I would have bought an Instant Pot if the VitaClay cooker wasn’t available. Silicone ring aside, I feel much better cooking food in stainless steel than I do in ceramic. That’s because of the potential that one of the glazes used is lead.

Although this isn’t supposed to be a problem, I’m wary of glazed cooking products made in China.

It is true that the Zisha clay used to make these clay cookers is mined in China. But it’s not glazed. There’s zero chance of lead being used in the glaze.

Also, the company that sells these pots says they’re certified to be free of lead.

So my review of the Instant Pot needs to be read in light of the fact I’ve been using a VitaClay cooker for years.

If these clay cookers didn’t exist, I’d probably be singing the praises of the Instant Pot.

One of the biggest advantages of the Instant Pot is that it’s a pressure cooker. So it can cook a meal fast.

Like 10 to 20 minutes for a baked potato, depending upon the size of the potatoes.

This is a big deal for those of us who look at the clock, realize it’s 6 pm and we haven’t really given much thought to dinner.

I’ve seen a recipe for homemade spaghetti sauce (with fresh tomatoes) that cooks in 25 minutes. You need another 10 or 15 minutes for pressure to release before serving.

If an Instant Pot allows you to eat more real food instead of processed food or take out, then it’s a healthy addition to your kitchen.

Why I Love My Instant Pot

But here’s the biggest reason I think the Instant Pot will be useful. There is an Instant Pot craze. This has generated an amazing amount of recipes, available on the Internet.

For free. It would take many lifetimes to get through them all.

New ones are added daily.

All of the recipes may make you more excited about cooking real food. This is a potential health benefit if you rely upon fast food or highly processed food.

I think there would be if more people knew about these clay cookers.

But Instant Pot has seized the day.

Some of these Instant Pot recipes could probably be adapted for my clay cooker.

But Instant Pot cooking is an entirely new animal. There are different times and methods. So it might not that easy. I’d probably ruin a few dishes before I got it right.

So we’ll likely be trying out a lot of those dishes designed for the Instant Pot.

I can definitely see possibilities for using the Instant Pot while traveling. It would be very handy staying in a motel room that doesn’t have a kitchen. You could make complete meals anyway.

You could also bring a VitaClay cooker on the road. But the appliance itself would take up a little more space.

We will need to learn a new way of cooking. There’s going to be a learning curve. Right now, I can’t even figure out how to get the lid to fit on the pot.

Another thing I don’t like about the Instant Pot is that you have to release pressure before opening the lid. This takes time. So even though cooking times are short, you have to factor this extra time in.

Also, the Instant Pot is much more difficult to clean, compared to my clay cooker.

It has more nooks and crannies. A lot of them. I washed the cover twice. Now I see I need to wash it a third time.

Hopefully as I use it more I’ll get better at cleaning it.

Because I can’t wait to try all those recipes.