What Is An Everyday Psychopath?

This is a natural health site. So I like to tell my readers how to avoid potentially dangerous chemicals, in food, water, cosmetics and household cleaners.

Then, there’s another type of health hazard. It involves people.

From time to time, I want to remind my readers that not everyone is who they appear to be. I truly believe most people are good. They mean well. They don’t want to intentionally hurt others. But a minority of folks don’t behave in ways we expect. Lying, cheating and stealing come naturally. They don’t relate to others honestly. If you get involved with one of these characters, you can expect some level of treachery.

If it does, you’re not alone. Many of us (myself included) have had first-hand experience. Right now, there seems to be an epidemic of bad behavior.

What is an Everyday Psychopath?

It defies the common stereotype of psychopath. We imagine that anyone with such a dark personality would be safely locked away. But that’s not the case.

It is true that many prisoners have anti-social characteristics. They operate contrary to what serves the best interests of everyone else.

These people have little regard for the rights of others. So they are called sociopaths or psychopaths. Another chilling characteristic is that they can commit the most atrocious crimes, but feel little or no remorse for their deeds.

Characteristics of a Psychopathic Personality

Please understand that I’m not a mental health professional. (My “education” comes from first-hand experience, coupled with Internet research.) So I can’t give emotional advice or diagnose anyone. All I can do is share what’s already widely known about anti-social personality disorders, as well as personal opinions.

(Also, I use the words “psychopath” and “sociopath” interchangeably. That’s because they mean pretty much the same thing.)

What are the Symptoms of a Psychopath?

Psychopaths are often smooth talkers. They take delight in pulling one over on people. Sometimes they don’t lie to avoid a consequence, but just for the sheer “pleasure” of being able to fool someone.

In addition to lying, cheating and stealing, psychopaths are known for having a sadistic side. So, after they break your heart, or rob you blind, or turn everyone in the office against you, they may do a little something extra to inflict additional pain.

We often read about psychopaths in the newspaper. We’re familiar with the notorious serial killers and the big-time swindlers. These are the folks we typically think of when we hear the word “psychopath.” 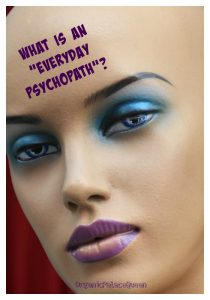 How to Identify a Sociopath

However, these aren’t the ones we need to worry about the most. That’s because they’ve been caught, and are probably serving lengthy jail sentences.

Far more troublesome are the so-called “everyday psychopaths.” They’re walking around free. They could be virtually anyone, as this disorder assumes a variety of guises.

I’m a firm believer that our best defense against deceitful people is an awareness they exist. That’s why it’s good to learn about the prevalence of personality disorders, so you know what to do when you see the warning signs, especially in a new relationship. (Head for the exit.) So here are some excellent resources that describe everyday psychopathy in much more detail.

The Sociopath Next Door

I’m not sure who coined the term “everyday psychopath” or “everyday narcissist.” But it’s one we’re hearing more frequently. It describes these under-the-radar predators who wreak an incredible amount of havoc. They get away with it, precisely because we don’t suspect them of being inclined to do evil. It’s also important to point out that women, as well as men, can be “everyday psychopaths.”

Anti-social traits, coupled with a “winning” personality, allows them to mask their disorder. It also means they’re extremely dangerous. I warn my readers to never underestimate a psychopath’s potential for destruction.

How Psychopaths Work to Undermine You

They begin a relationship by sizing you up. At the same time, they shower you with compliments. This is also known as “love bombing.” As they assess your needs and weaknesses, they twist their personality to mirror yours. Unbeknownst to you, they start fulfilling your emotional needs, which you may not even know you had.

However, this relationship is on a collision course. Eventually, you’ll do something to upset or “disappoint” the psychopath. That’s because he or she sets impossible standards. As soon as you deviate, or, even if you don’t, the praise turns to criticism. Eventually, it wears you down.

But it almost pales in comparison to the treachery. Keep reading, and I’ll explain more just what these everyday sociopaths are capable of. Or, you can check out a few of the other articles I’ve written on character disorders.

How to Forgive Someone and Let Go of Anger

I’ve yet to meet a disordered person who doesn’t malign others. If you’re involved with a psychopath, and the relationship implodes, it’s almost a guarantee that he or she will spread vicious lies. These are designed to destroy your reputation.

By the time you suspect the relationship has run off the rails, all of the key people, who could potentially impose sanctions, social or otherwise, on the psychopath, now believe something is seriously wrong with you.

Expect to lose some “friends” if this happens socially. However, if you tangle with a psychopath at work, this puts your job in jeopardy.

So, Who Are These Everyday Psychopaths?

So now you know. An alarmingly high percentage of the non-prison population has what psychologists call anti-social personality disorder. This is an umbrella term. It describes severe disturbances, such as psychopathy and malignant or malicious narcissism.

Dr. Martha Stout, PhD., author of The Sociopath Next Door, also shown above, believes that 1 out of every 25 people is a sociopath. Given the high incidence, you’ll find sociopaths just about everywhere you go. It’s highly likely you work with them, shop with them and even socialize with them.

The best way to protect yourself from dangerous, malicious people is to develop a healthy awareness they exist. This better enables you to spot the subtle warning signs that a new acquaintance may have a dark side.