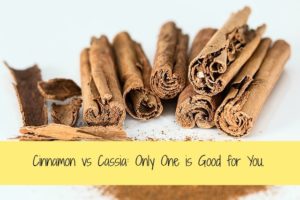 Ceylon Cinnamon is not something you’re likely to find in your grocery store. In fact, chances are, you’ve never tasted this type of cinnamon unless you’ve ordered it online.

That’s because almost all of the cinnamon sold in the United States is cassia. This is an entirely different plant, with a different chemical profile. Unfortunately, it contains high levels of a compound called coumarin, which has the potential to damage the liver. For this reason, health authorities in the European Union have banned the amount of cassia that can be added to commercial pastries.

On the other side of the Atlantic, however, most people are unaware that the “cinnamon” they sprinkle on their toast isn’t the real thing. Nor do they know it’s considered a health hazard in Europe.

Cinnamon Health Benefits and Side Effects

Because many of us have become more health conscious, we’ve heard that cinnamon is good for us. So we tend to add cassia (since that’s what’s available in the US) to many of our foods. Under normal circumstances, spicing your food is a good thing.

In fact, there’s even a school of thought, among natural health experts, that common kitchen spices such as cinnamon, when used regularly in cooking, can protect us against various illnesses. Some mainstream doctors also advocate adding spices to our meals. For centuries, these plants have been used medicinally, and they have a long track record of safety.

But cassia, harvested from the bark of a tree that grows throughout Southern China, may not be so good for us. At least not if we consume it frequently. Some of us also don’t like to consume foods from China, due to safety concerns.

That’s why an apparently growing number of consumers, myself included, insist upon using only real Ceylon cinnamon.

Ceylon cinnamon is scientifically known as Cinnamomum verum, or “true cinnamon.” It grows primarily in Sri Lanka. This cinnamon is becoming much more popular as word gets out that those of us living in America haven’t been getting the real deal.

Both types of cinnamon, the true species, as well as cassia, have potential health benefits. These include regulating blood sugar levels, stimulating the immune system and reducing inflammation. But it’s the coumarin levels of cassia that raise concerns. Ceylon cinnamon contains only a fraction of the amount of this naturally occurring chemical.

I became interested in obtaining some real Ceylon cinnamon after reading about some of the benefits. Since I suffer from a painful nerve disease, controlled with diet and supplements, I was especially intrigued with cinnamon’s ability to reduce inflammation. So I ordered some real Ceylon cinnamon and never looked back. In fact, I threw my organic cassia powder into the trash.

If you want real cinnamon, it should say Ceylon on the label. If it doesn’t you can assume it’s cassia. This is true even if the label says USDA-certified organic.

The stores in my area only sell cassia cinnamon. I’m hoping this will change in the future. But, for now, I need to buy my cinnamon online. True Ceylon cinnamon smells wonderful and tastes heavenly, with none of the strong cassia after bite. True cinnamon is also sweeter than cassia. If you sprinkle it on your toast, it tastes great, even without sugar.