Where to Buy Ceylon Cinnamon Supplements 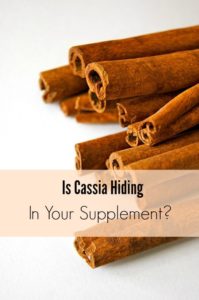 Did you know that most cinnamon sold in the grocery store is fake? This means that many people have no idea what real cinnamon tastes like.

The most common form of cinnamon sold in the United States is from another plant known as cassia. It’s a different species altogether. It looks and smells somewhat like real cinnamon. However, it’s much sharper and it also has cloying, slightly unpleasant overtones. Real Ceylon cinnamon, on the other hand, smells Heavenly.

These aesthetic differences wouldn’t be an issue if cassia didn’t end up in dietary supplements, intended to be consumed daily, over a period of time. These are typically labeled as cinnamon.

People take them because they’ve probably heard that cinnamon is good for you.

Adding a little cinnamon to your health regimen seems to be an increasingly popular thing to do. This is no doubt happening as more people learn about cinnamon’s potential health benefits.

Cassia does have its good points. It appears to have some of the same qualities as cinnamon. However, there’s also concern it has the potential to cause serious health problems. In Europe, people are warned to watch their cassia intake. In fact, in recent years, the EU even moved to ban “Danish rolls” that contained too much cassia. That’s because these treats typically exceed the limit of what’s considered safe amounts of this spice.

In the end, these sweet rolls got an exemption. That’s because they are considered “traditional” Danish food. So they can still be sold with more cassia than what’s usually allowed under law.

It’s feared that a compound found in cassia called coumarin can cause liver damage. This naturally occurring chemical is also found in real cinnamon. But its presence is negligible, compared to cassia. One Czech study found that coumarin levels in one sample of true cinnamon was “below the level of detection.”

Once I realized this distinction, I got rid of my organic cassia and replaced it with real Ceylon cinnamon. This is the spice we now use for cooking, baking and sprinkling on our food.

I suffer from painful and incurable nerve inflammation. But, fortunately, I live nearly symptom free by paying very close attention to my diet and taking various herbs and supplements. Occasionally, I use real cinnamon mixed with honey as a health tonic.

Cinnamon has attracted the attention of researchers. Some studies have found that it helps regulate blood sugar. (However, if you have diabetes, do not stop taking medication and attempt to treat yourself with cinnamon.)

According to the Mayo Clinic website, a group of people who took daily cinnamon capsules for three months did show improved hemoglobin readings during that time period.

Where to Buy Ceylon Cinnamon Supplements

Cinnamon is also thought to be good for your immune system and your digestion. It contains natural anti-inflammatory compounds, so it can potentially help people with arthritis and other conditions such as fibromyalgia.

Please understand that I’m not dispensing medical advice or suggesting that cinnamon will help with these problems. All I’m doing is sharing my personal experience with natural remedies.

Although there is a great deal of research left to be done on both cinnamon and cassia, some people prefer to take true cinnamon supplements, in order to avoid any potential problems with courmarin. Oregon’s Wild Harvest True Cinnamon, shown above, is derived from real cinnamon, and does not contain any cassia. 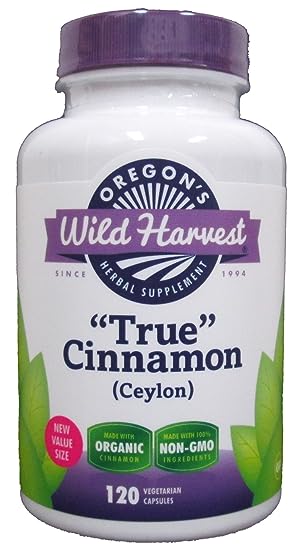 These statements have not been evaluated by the FDA. These products are not intended to diagnose, treat, cure, or prevent any disease. Women who are pregnant or nursing should not take herbal remedies unless directed to do so by a healthcare professional. This article is not intended as medical advice.