Where to Buy Organic Beef Jerky 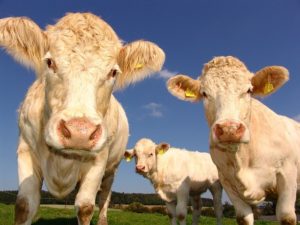 This means you don’t have to worry about potentially carcinogenic nitrosamines. Buying organic also means the meat comes from animals raised without antibiotics. If you’re not aware of the dangers of this widespread practice, read on and I’ll explain.

Beef jerky was one of my favorite foods when I was young. We moved to California when I was nine. There, I discovered this delicacy. Once I tried it, I was hooked.

This was decades ago. At the time, this snack was not available everywhere. It wasn’t sold in some parts of the country. Now, though, you find it in convenience stores, grocery stores, drugstores and vending machines throughout America.

Kids love the taste of beef jerky. It makes a great lunchbox snack. It’s an easy way to eat something with protein when you’re on the road, or backpacking through the woods. Preppers love jerky. This dried, seasoned meat will last a long time if the grid goes down, or disaster strikes.

However, when I was young, ignorance was bliss. I had no idea one of my most favorite foods was a likely health hazard. Most jerkies are made with sodium nitrate. This is added as a preservative and coloring agent. Nitrates in the body can form compounds called nitrosamines, known to cause cancer.

Natural health experts have been sounding the alarm on nitrosamines for a long time. A few studies are beginning to link nitrosamines to various types of cancer.

Where to Buy Organic Beef Jerky

Jerky is now sold virtually everywhere. But not the organic kind. You may be able to find some in a local healthfood stores, or in a high-end grocery store. Otherwise, you can order it online.

Golden Valley Natural Organic Beef Jerky teriyaki flavor is produced in America, from cows that are not fed growth hormones, animal byproducts or antibiotics. It is gluten free and contains no artificial additives or flavorings, such as MSG. It is USDA-certified organic. 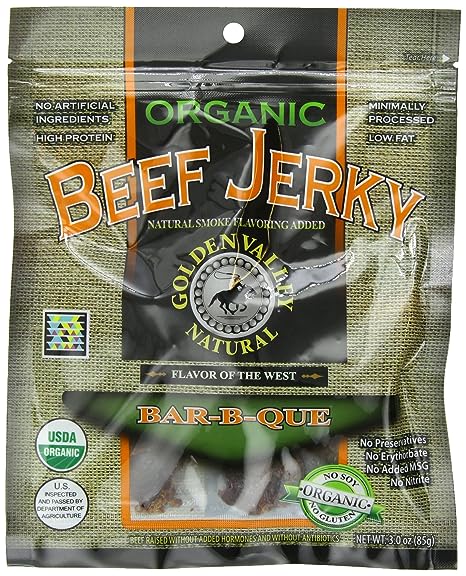 Pharmaceutical firms in the United States produce vast quantities of antibiotics every year. Do you know who consumes most of these drugs?

It’s not the frail, infection-prone elderly people living in nursing homes. Nor is it the toddlers who visit their pediatrician with an ear infection.

Instead, it’s the millions of farm animals who ingest these drugs day in and day out. About 80 percent of all antibiotics sold in the US are intended for healthy animals, who consume them in their food and water, according to the National Resources Defense Council. On its website is a slogan that reads “Meat+Drugs=Superbugs.”

Many large, commercial farms routinely give their animals antibiotics. For reasons unknown, this results in faster growth. So this practice has continued, despite clear warnings that it poses a public health threat.

For decades, various groups have tried to get the food industry to clean up its act. Even the US Food and Drug Administration, in the 1970’s, recognized that this situation is unsafe, because of the risk of creating “super bugs.” However, despite lawsuits, this agency has not ordered farmers to change the way they do business.

Instead, the FDA has recently issued a new document called Guidance 213, in an effort to address this situation. However, this publication is very controversial.

That’s because it calls for farmers to voluntary stop using antibiotics, something they’ve also been asked to do in the past.

There is also the matter of big interests at stake. Putting antibiotics in livestock feed is an immensely profitable proposition, both for the farmers and for the pharmaceutical firms who make these drugs.

If you’re interested in reading more about the politics behind what ends up on our dinner plates, Food Inc. offers an in-depth look at our nation’s food supply.

The Problem of Drug Resistant Bacteria

A number of medical groups, including the American Academy of Pediatrics, has criticized the practice of feeding antibiotics to farm animals. These drugs are widely implicated in causing the strains of resistant bacteria now found in hospitals, as well as in the general population.

There are now two million cases of drug-resistant infections reported each year in the United States. Unfortunately, 23,000 million people a year also die after contracting one of these “super bugs.”

Some alternative medical practitioners are also concerned this farming practice could contribute to the alarming rise of cancer and degenerative diseases found in the US population. One of the reasons for this might be because antibiotics kill the beneficial bacteria in our intestines.

If you live in the United States, there’s only one way to avoid met from animals fed antibiotics. Buy meat that clearly says, on the label, that no antibiotics are used. Better yet, buy organic meat. Although it is more expensive than meat from animals raised in large commercial operations, it’s a good investment in your health.

Antibiotic Use in Livestock