Which Dairy Free Milk Tastes Most Like Cow’s Milk?

Going dairy free is an option many of us have embraced.

For health or for other reasons.

In my case, I do it because of chronic nerve inflammation.

Milk, cheese and ice cream were once among my favorite foods. But my pain had reached the point where I had trouble walking. So I very reluctantly ditched these foods and my body started to heal.

I still don’t know exactly why milk caused so much pain. I suspect I have a sensitivity to casein, a protein found in cow’s milk.

It’s quite possible to live a happy life without milk. Lots of people in Asia don’t drink milk. The traditional Chinese diet doesn’t include it.

In America it’s a different story. We’re used to drinking cow’s milk. We also have a very powerful dairy industry that promotes the idea that cow’s milk is good for you and that you absolutely must have it.

But some of us (me included) think we feel better without it.

Obviously, I’m not alone. Judging by the ever expanding number of milk substitutes that can be used in cooking, baking and also in cereal.

Some of them don’t taste much like milk. They’re thin and watery. Others are much better. I’ll tell you about my favorite dairy substitute in a minute.

Which Dairy Free Milk Tastes Most Like Cow’s Milk?

I’ve been dairy free for a number of years. I missed cow’s milk at first. But no longer. I’ve gotten used to cooking without milk. Most recipes still work without the cow’s milk. I’ve found this to be true even of baked goods.

There are also many good dairy free recipes. I’ve found delicious stuff on Real Plans, a healthy meal planning service. I was even able to make an incredible dairy-free beef Stroganoff that tasted like the real thing. (This service would be very helpful for someone just starting on a dairy free diet. You wouldn’t have to use it forever. Just for a month or two.)

Sometimes, though, nothing but real milk or a good milk substitute will do.

That’s when I bring out the pea milk. As strange as it sounds, pea milk is delicious. It’s the closest thing to real cow’s milk I’ve found. It’s also filling and high protein.

I can honestly say I like pea milk even better than cow’s milk. It doesn’t have that sour aftertaste you often get after drinking the real thing.

Fruit smoothies absolutely need something dairy like. But pea milk works great. Here’s my recipe on how to make fruit smoothies without yogurt.

I have made fruit smoothies with almond milk. This milk substitute does a decent job too. But the pea milk results in a creamier smoothie.

Anyway, I was really surprised by how much I like pea milk. Someone in my family had bought some and encouraged me to try to.

The thought of drinking milk made from green peas isn’t appetizing. Don’t worry. The pea milk on the market is made from yellow peas. (I’ve never liked the smell of green peas.)

It tasted so good I wanted more. Now I add it to my weekly shopping list.

The brand we buy is called Ripple. It’s available in the grocery store. But, unfortunately, the unsweetened version that I like best seems to sell out quickly. In my opinion the unsweetened variety tastes the most like real cow’s milk.The vanilla version maybe even a little more so. The Original Ripple pea milk is okay. But too sweet for my taste.

Ripple Original pea milk is sweetened with sugar. But it doesn’t come from a genetically modified source. The pea milk we buy has a NON GMO Project label on the back. This is important. Genetically modified foods are shown to cause cancer in laboratory animals.

You should be able to find pea milk at your local supermarket. It’s also available online.

It’s hard for me to comment on this because I like to drink my coffee black. But I did brew a cup and added some pea milk. It tasted okay. But not quite like milk.

However, if you can’t drink milk and don’t like drinking black coffee, this is a good alternative.

Dry cereal is something that needs milk. Or a good tasting milk substitute. This is where pea milk excels. Once you get used to its slightly different taste, you can still enjoy your cereal.

Ounce for ounce pea milk is more expensive than regular cow’s milk. There’s no getting around that fact. But the price tag may be worth it if you really want a good milk substitute. 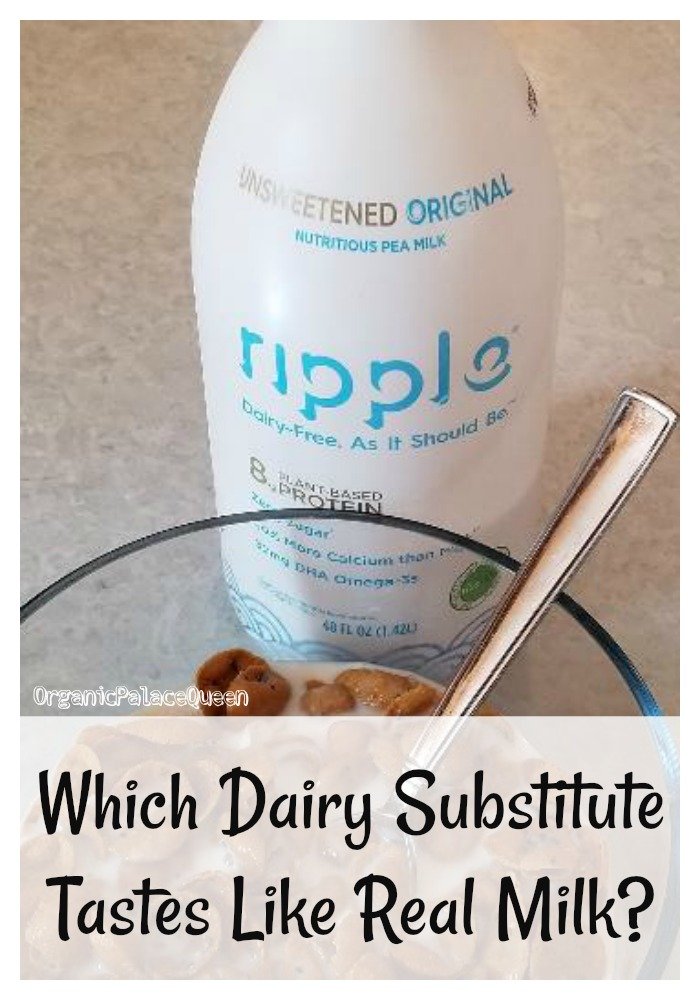 Leave a Comment
Previous Is Coconut Oil Good For You?
Next How To Protect Yourself From Seafood Fraud